An Ancient Feast of Hellenic flavours in the heart of Melbourne

Brought to you by George Calombaris’ Oh My Greek Week (OMGW) and its cultural partner, The Hellenic Museum One of the oldest and most celebrated cuisines, Greek cookery has been shaped by a history dating back thousands of years. Gain deeper insight into the fascinating story behind Greek food at this feast inspired by ancient Greece, prepared by the foremost experts in Hellenic culinary traditions. Complete your journey of discovery with a private tour of a collection of rare items from Athens’ Benaki Museum, thanks to OMG Week’s cultural partner Hellenic Museum.
This exquisite dinner will be prepared by three acclaimed chefs, Greek cuisines pecialists.

Maria Loi has come all the way from America for OMGW. Mrs Loi is a global ambassador of Greek gastronomy, elected by the Chef’s Club of Greece – is a chef herself, author, restaurateur, entrepreneur, member of Les Dames d’Escoffier, and philanthropist.
Her culinary prowess has made her a food superstar being a popular television chef in Greece and the U.S.A a not to mention the author of more than 36 cookbooks, including Ancient Dining, the official cookbook of the Athens 2004 Olympic Games, and her most recent, The Greek Diet. Her Loi line of products is available across the U.S.A.
Chef Loi’s mission in life is to change the world through thoughtful and nutritious eating, but educating people on how tasty, healthy, and easy Greek cuisine can be. 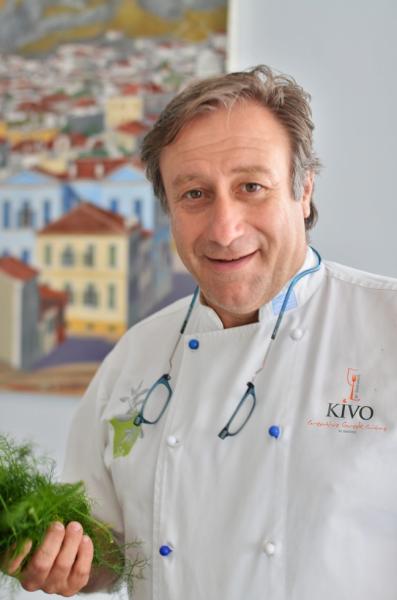 Yiannis Baxevanis, one of the major innovators of the Greek cuisine, known as the “magician of aromatic herbs” will also be presenting his gastronomic secrets.
Most awarded in Greece and abroad, his career includes working in France for five years, and upon his return he built a reputation in Greece for his work as gourmet chef at Grecotel Mykonos Blue in Mykonos, Elounda Beach in Crete and Grand Resort Lagonissiin in Athens, and many independent restaurants. With his team he consults several top restaurants in Greece and has participated in food presentations in the USA, France, Belgium, Germany and Spain. He has expanded overseas and is soon to open a new venue in Canberra, Australia.

Last but not least, Hellenic Republic’s Travis McAuley. A seasoned chef in the industry, Travis has been working with George Calombaris for over 10 years. Australian born, Travis is an honorary Greek with an extensive knowledge of Hellenic flavours and cuisine. As the executive chef of Hellenic Republic, Travis is heavily involved in the three venues across Brunswick, Kew and the newly opened Williamstown. With an innate love of cooking, this translates to the plate and you are sure to feel this whilst dining. Travis is definitely a true Greek at heart.
The intricate menu includes four course sharing plates and matched beverages at the price of $130 per person.

Tickets are almost sold out; only a few seats left so do yourselves a favour and follow this link asap
http://omgweek.com.au/the-ancient-greek-feast