One of Melbourne's most famous psychics is Greek. We visited Fotini Katsaneris to see what all the fuss is about

Growing up, I was raised in a very religious household and school, but this never stopped my curious mind from being intrigued by all things natural and supernatural in this world, so when the opportunity to meet psychic Fotini came up, I was definitely keen and as always, open minded.

Fotini came to my house one morning and I felt as though I knew her, simply from following her on Snapchat and Facebook; she was the same confident, bubbly personality she portrays herself as on social media, but this day with a hint of seriousness. My children were instantly drawn to her, scrambling to climb up on her as she bounced one on her knee and let the other hijack her phone.

I asked Fotini about where her parents originated − Katerini and Limnos she tells me, so our families are practically neighbours. She told me how much she loves Greece and everything Hellenic, but if you follow her Snaps, you would pick that up about her immediately from the Greek tunes blaring in the background and the conversations she has with old yiayiades at cafes. We spoke about friends, relationships and jealousy, among other things. She gave me some motivation to keep going with my recent business endeavours, with a slight look I took as “she knows something”. I also asked her a few hard-hitting questions about sceptics, as I am one myself until I see evidence to prove otherwise. She told me of a few people who have written hurtful things to her about doing a priest’s work, etc., with the house cleansing, and how she never claims to be anything godlike or supernatural, she’s just “a lady with a gift”.

Fotini is self-taught in all her services, “only having been given some guidance from others” in her life, but otherwise she has nurtured her gift entirely on her own. I asked how she discovered her gift and she simply said it was something she had from a young age and just went with it. She also had a person in her life passing and acknowledged that spirit is with her, guiding her with the things she sees.

When I told her I would be writing her story for Neos Kosmos and that I wanted to address all the negativity people have around psychics, she had no qualms in addressing these questions, as she is confident in her “gift” and feels as though she has helped so many people with what she does.

What sort of services do you offer?
Psychic card reading, which is done from a traditional deck of playing cards, where I offer guidance on all things life, love, career and the like, as well as guidance in the healing process for those needing help. Home or business cleansing, aka removing bad energy from the space, which can help with troubled sleeping, depression and general bad luck, and evil eye removal, for those feeling blocked as though they need help moving forward or generally having bad luck in life. What do you say to the people that call you a fraud? That it’s all guesswork or even those who call it sacrilege?
There will always be those people. I can expend all my energy challenging the sceptics or I can channel it to where it’s asked for and received positively. It would not be normal to not have sceptics. There are still so many people challenging the theory of global warming, even though it’s no longer a theory and a proven science. If respected scientists are challenged by sceptics, then I’m in esteemed company.

You have such great reviews, how do you manage such a high success rate?
It’s not something I can manage or control. The best way I can describe it is blocking out all external influences when I’m doing a reading or an energy cleansing and focus all my strength and energy into the energies surrounding the person I’m with or the house I’m in. The focus and attention is both the challenge and the key. If a job has been exceptionally challenging, it’s not unusual for me to feel totally drained or to be left with a headache at conclusion.

My card reading method is also unique and very different to the traditional tarot people are accustomed to. It’s a normal deck of cards which is so well worn, you can barely see the suit. I know them all by instinct though. Then there’s my second deck. That one is the one which blows people away. It took me hours upon hours to make it up myself, and these zero in on the precise energy and situation at hand. They almost speak to you. 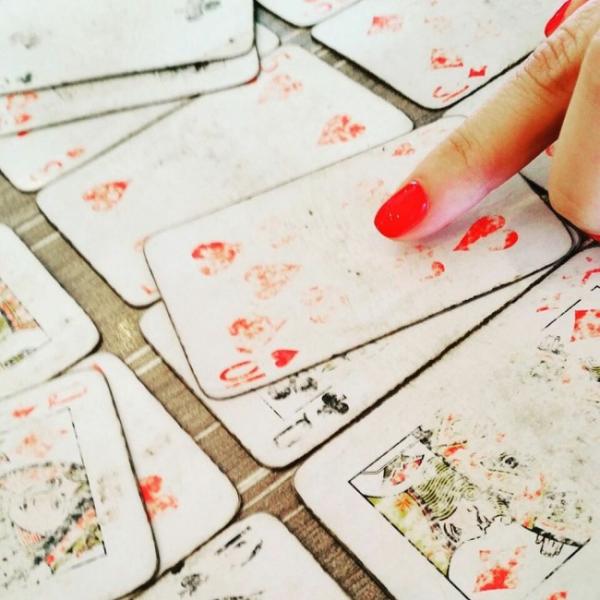 Can you share a story with us of someone you helped that also had an impact on your life?
One which particularly stands out in my mind is of a 12-year-old boy, he was having trouble at home, trouble at school, getting into fights, trouble in class and fighting with his parents. He wasn’t sleeping well and just carried a lot of anger, his parents were so distressed, they had reached the end of their tether. Someone they knew then contacted me. I visited the home and the moment I entered, I felt the suffocating sensation of bad energy. Someone who had visited in the past had left some very negative and bad energy. I was there for what seemed like ages, I did the house cleansing and left very drained.

Five days later the mother called me. She said there was this sense of calm that had enveloped the house immediately. Her son became a different child.
His anger had melted away, he was settled at school, more focused, and for the first time in a long time he was smiling.

The sense of satisfaction I felt when hearing this is indescribable. It impacted on me because it inspired me to help even more people, and aside from the satisfaction that brings me, it’s also fine-tuned my senses and ability, which enables even greater results.

Were there any occasions where you were unsuccessful and why?
That’s a hard one to answer because, how is it measured? If a client expects to hear a certain answer and they receive a different one, they may deem the reading unsuccessful but maybe they’re being told something else they don’t want to hear. That doesn’t make the reading unsuccessful, it’s only unsuccessful in terms of what the client was hoping to hear. I do come across these situations. In the vast majority of those, after a passage of time, they contact me to say what I had read at the time actually came to be. I guess it’s the difference between foresight and hindsight. Do you only share good predictions, or would you share something terrible that you saw in someone’s future?
I don’t only share good predictions, but by the same token, I would never tell someone “you’re about to die”. I’m not a doctor and I’m not a God. I may foresee an accident, for example, but I’ll advise to exercise caution in what I see as the risk. If it’s to do with death, that is only in God’s hands. If I see infidelity for example, yes, that’s terrible in someone’s future but I don’t spare that information in those situations. Giving clarity in that regard, although painful, empowers people to take appropriate measures.

Do you have many non-Greek clients? Do you have a diverse range of customers?
Oh absolutely! This isn’t just a Greek thing. I have clients from every ethnic and industry background and some of them very high profile. With access to social media and the world wide web, people are more informed and well read. They understand that as beings, we’re all driven by energy, both our own and the energies of others around us. Have you ever spent time with a person and thought “gee, they’ve drained me”? Or the opposite when you’ve felt a surge of energy? Clients come to me to identify those energies, read them and give them guidance on how to manage them, draw on them or protect themselves. It crosses over into all groups. Have you worked with any celebrities?
Yes, quite a few and some of the least likely you’d expect. I operate under a strict code of ethics though, and confidentiality is paramount.

What has been the best moment in your career – something that stands out for you?
I’ve had many feel-good moments. I can’t specifically identify a ‘best moment’. Every moment is a best moment when a client comes back to me all excited that I was spot on in my prediction or the energy cleansing has totally turned them around. Some argue that clairvoyants prey on the vulnerabilities of those seeking answers and telling people what they want to hear, and I’ll be the first to say there are many of them around. That’s such bad karma to those who manipulate the vulnerable. I’ve been given a gift. I channel it to help people and when I receive the feedback I do in my reviews, they’re all special moments in my life.

You can find Fotini on www.psychicfotini.com.au