The first World Summit Chefs’ Congress took place in a spectacular ceremony held at the Grimaldi Forum in Monaco on 27 November.

The congress, which continued in Monaco Gourmet until Tuesday 29 November awarded Greek chef Andonis Drakoularakos, owner of restaurant Sushi Mou, among the world’s most esteemed professionals.

It is the first time a Greek has been included to this list said to feature chefs whose dishes “touch perfection”.

Drakoularakos, devoted quite a few months of extensive training in Tokyo, before opening his restaurant in the historic centre of Athens. His intention was to create a real boutique yet affordable Japanese eatery in his hometown.

Sushi Mou, which only caters for 12 people at a time, is based on the purity of Japanese culture as the chef experienced it himself; nature, balance, simplicity and harmony are the core of every dish. In the first place came Alain Passard of the emblematic three Michelin star L’ Arpège in Paris, while acclaimed chefs Martin Berasategui and Pierre Gagnaire second and third respectively representing their namesake restaurants.

The low-key Syntagma located restaurant’s logo features an origami crane holding a pair of chopsticks with its beak while another crane keeps company to little fish swimming on the restaurant’s walls. The Haruki Murakami inspired design is again minimal and stripped to the bare essentials; flavours are the hero of this experience. The menu changes every day depending on the availability of fresh ingredients and therefore gets reprinted featuring a calligraphy style painting which represents the Japanese flag. It is then asymmetrically folded in-house to enclose the daily specials.

At Sushi Mou one can delve into top quality sashimi ranging from from skipjack and cuttlefish to scallops and mackerel as well as nigiri with bonito, crayfish and mullet. Marinated eel, crab, lamberjack, maki, soup and the seared sea bass with caramelised miso are also top-selling dishes. 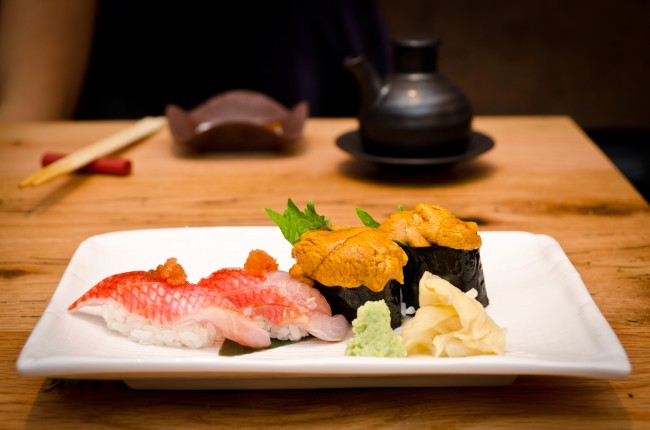 Fusion sushi options with traditional yet reworked Greek fish recipes are available too, heroing chirasidon, christopsaro, barbounia and maridaki. Antonis will ask his guests their preferences and then adjust the menu to their taste creating a personalised dinning experience at only 40€ pp with a beer each.