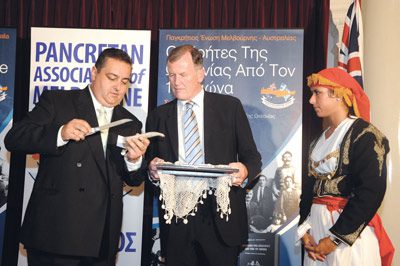 THE book Cretan of Oceania from the 19th Century was launched on Wednesday 4 at Parliament House by Rob Hulls the Victorian Attorney-General in front of over 200 guests. Hulls congratulated the author Socrates Tsourdalakis and acknowledging that the eight year Herculean task of researching and documenting the settlement of Cretans in Australia and New Zealand was “a labour of love” adding “I congratulate him on such a magnificent depiction of the proud heritage of his community.” The Attorney-General when in talking of Cretan’s early 19th Century settlement in Oceania paid homage to the deep bond between Australians and Cretans forged in World War II, in the Battle of Crete, “The Cretan community can be justifiably proud of its extraordinary courage during those dark times.

When we hear stories about individual acts of resistance – of how Cretans hid and sheltered Allied soldiers at great risk to themselves, their families and villages – we understand why those young Australians and New Zealanders soldiers felt they owed the people of Crete so much.”

He concluded by saying, “For this reason, the Brumby Government was proud to support the production of this book – and the opportunity to foster a deeper appreciation of the proud history and contribution of the entire Hellenic community.”

Author Socrates Tsourdalakis when asked by Neos Kosmos English Edition (NKEE) how he felt replied, ” Relieved… it took me many years to complete this book, I had the satisfaction of I establishing something, a historical testament, for the incoming generation.”

Mr Tsourdalakis underscored with conviction, “It’s a duty of all Greeks and communities that the first generation write something for their children.” Mr Tsourdalakis highlighted the painstaking effort of researching on earlier generations, “It was a real challenge trying find about the generation of the 19th century, I did not want the future generations to face the same difficulties when they begin looking back to find out about us, the post war generation.”

As part of his research Mr Tsourdalakis came across Brian Morris a descendant of the first Cretan who arrived in 1842 Georgios Voyatzis and Afrodite Cretan (ne Stavroulakis).

The President of the Pancretan Association Of Melbourne Australia, Anthony Tsourdalakis said to NKEE, “It was a very emotional event especially to see hear and Afrodite Cretan speak. As immigrants they changed their sir names to survive in a different Australia but Ms Stavroulakis changed it to Cretan as homage to her ancestry.”

The book is available from the Pancretan Association or by contacting Mr Tsourdalakis from info@pancretan.com.au