Even though Christopher Apostolou had two decades of experience in dermal science where he worked alongside specialists, plastic and reconstructive surgeons for international skincare and laser companies, it wasn’t until a double cancer threat hit his family that he decided to do work towards improving the life of radiotherapy patients.

The inspiration behind c2skin skin products originated when his sister Christina Billington (nee Apostolou) was diagnosed with cancer at the age of 40 and required 12 months of chemotherapy and six weeks of daily radiotherapy.

Christina’s news was preceded by their sister-in-law Helen’s breast cancer diagnosis, only three weeks prior to her own.

“The day of Helen’s mastectomy, Christopher had suggested I have a mammogram as I’d not been feeling well for a few months. Three weeks after Helen’s mastectomy and without any obvious tumour or signs of cancer, I booked in for a mammogram. I was immediately told further investigation was required via an ultrasound.”

“She had broken and blistering skin, weeping and infection. Helen and I gave each other comfort and strength as we had each other to lean on. Helen was diagnosed with secondary cancer in 2011.
“She lost her brave battle against breast cancer in February 2013. It was devastating. We loved her so much. She was only 43 years old and had two young children. Helen continues to inspire us on this journey.”

Christina discovered that other than mostly petrochemical-based creams, there wasn’t a naturally-derived moisturiser available to combat the inflammation, redness and ‘burns’ of radiotherapy.

Those six weeks of daily radiation treatment and the aftercare suggested by the hospital raised many concerns for Christopher who has also lectured in Skin Anatomy and Dermal Science at a university level.

“Christina regularly kept me updated on her progress during her therapy, and she voiced her concerns that the hospital was recommending she apply a cream derived from the petrochemical industry to the skin,” he says.

Indeed the petrochemical-derived creams prescribed to radiation therapy patients has no proven healing, repairing or soothing properties while radiation therapy can be very invasive and may lead to crusting, weeping, discolouration, inflammation and skin texture changes.

Meanwhile, a Breast Cancer Network Australia study of 241 women evaluated the numerous skin changes relating to radiotherapy treatment with 87 per cent of the participants experiencing inflammation and redness.

“I believe that individuals that have been diagnosed with cancer and must undergo radiation therapy should at least have a choice of what they can use on their skin,” he insists.

“This heavily influenced the motivation behind c2skin, with a view to replace the current petrochemical-based cream with naturally derived soothing and healing skincare.”

Christopher commenced research and development in 2011. He then collaborated with skincare specialists to further formulate the skincare specific to changes that occur during radiation treatment, and he completed a specialised dermal science qualification that has resulted in a deep understanding of how healthy skin functions and has extensive clinical experience in managing difficult to treat skin conditions.

“Skincare is a lengthy process when done correctly especially when meeting international testing standards for which there is no compulsory minimum in Australia. We wanted to set a high benchmark with rigorous testing as we knew it would benefit consumers; safe and ethical, with no cheap fillers and animal testing.

“We have conducted preservative efficacy testing (PET), and the skincare is regularly microbiologically tested and has also been dermatologically tested to meet the criteria for use on sensitive skin. We aim to address the common side effects from radiotherapy by collaborating with radiation oncology to undertake a comprehensive clinical trial.” 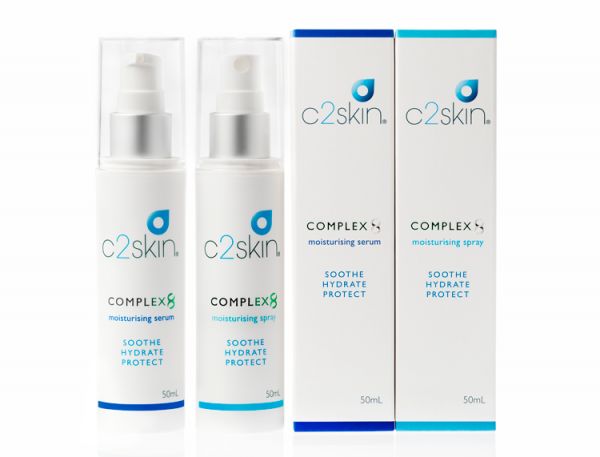 The skincare Christopher created contains a unique combination of high quality ingredients sourced locally in Australia as well as from France and Switzerland.

The formulas were specifically developed to help the skin to function correctly whilst being beneficial for all skin types and ages.

“We are very content with the progress we have made and are working into creating more products,” Christina says.

“We would also like to announce that c2skin will be supporting Breast Cancer Network Australia, beyondblue and Bowel Cancer Australia by donating 5 per cent of all skincare sales to these not-­for-­profit organisations. Being personally affected by cancer, we recognise the importance of assisting organisations that help many Australians during difficult times.”

c2skin’s Complex 8 formulations are moisturisers and not therapeutic goods.