It’s hard to believe that up until this point the waterfront city of Geelong didn’t have a Greek restaurant, given that it is Victoria’s second biggest city.
Mav’s, named after owner Milton Mavromoustakos (meaning black moustache), officially opened its doors on Thursday and is located in the bustling West End precinct on Little Malop Street.

Owners, husband and wife Milton and Julia are no strangers to hospitality, or the area for that matter.

Originally from the picturesque island of Rhodes, six years ago they decided to officially call Australia home and have made a name for themselves down the coast as the owners of the iconic fish and chip shop Mavros in nearby Ocean Grove, and it was their customers that planted the seed for Mav’s.

A trip down to Melbourne helped to inspire their restaurant dreams.

“So it took us some time, but we’re here,” Milton said.

While it’s been a long wait for some Greek cuisine, guests from their VIP lunch and dinner services on Wednesday have confirmed the wait was well and truly worth it.

“It has been really unbelievable,” Milton said. “We’re offering customers the Greek cuisine, the traditional Greek cuisine. All our guests attended and the comments have been fantastic.”

Recipes have been perfected by the head chef and for the first 10 days of business, the kitchen will be churning out fresh, homemade fare over lunch and dinner, after which breakfast will be introduced.

Ideal for couples or big groups, the menu has been designed to be representative of the way Greeks eat at home and so is aimed at sharing, with a combination of smaller dishes and larger portions, accompanied by an extensive curated wine and cocktail list. 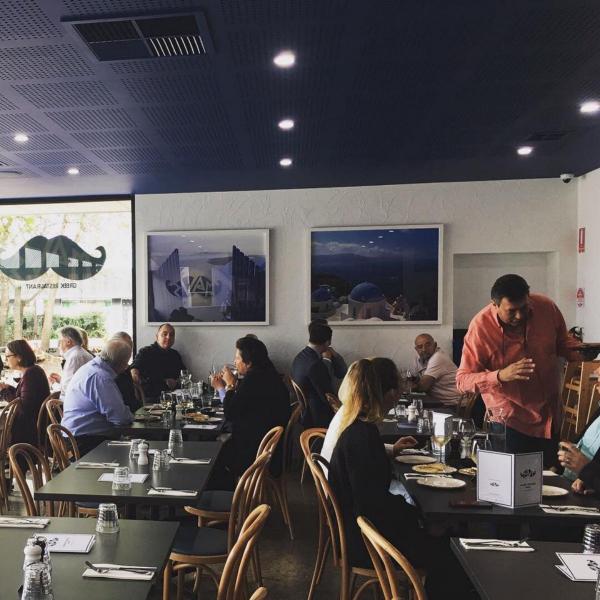 The menu features a range of dips and appetisers with all the favourites such as tirokafteri and marinated octopus. Starters include housemade pastourma ­(sausage) and saganaki prawns cooked in a rich tomato and ouzo sauce. Mains include hearty choices such as pastitsio, souvlaki in a variety of meat options, and Cypriot sheftalies. There’s also a kids’ menu to keep the little ones’ happy and an extensive dessert offering.