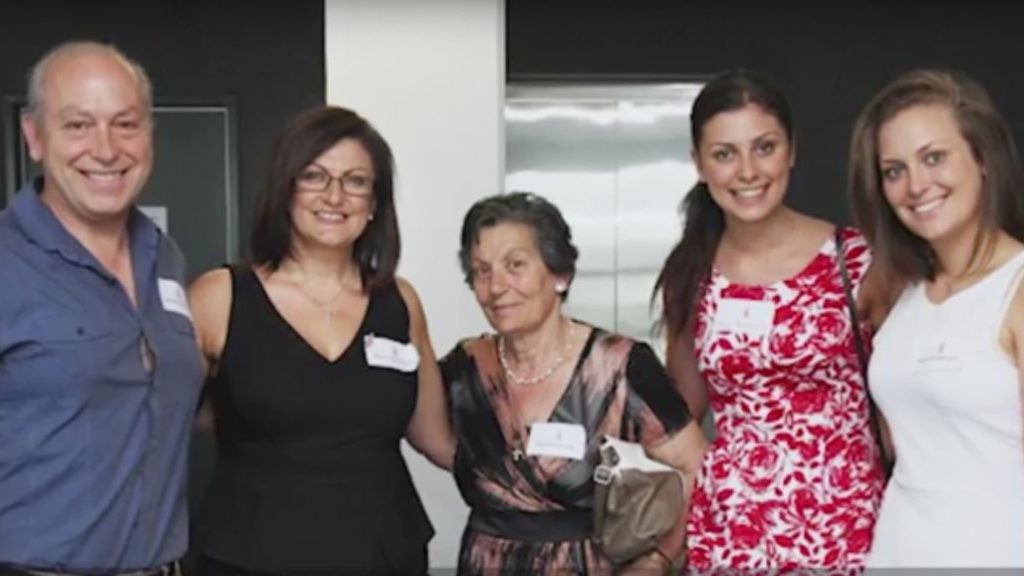 (R-L) Penny Pandeloglou with her sister Dora, her grandmother, her mother Marie and her father.

Greek women in Australia aged 50-63 years have conquered a first place, but sadly it’s not one they can feel proud of.

Our community stands at the very top amongst women from Culturally And Linguistically Diverse (CALD) backgrounds that avoid being subjected to a mammogram until it is too late.

This sad reality has been prevalent for years, with organisations like Breast Cancer Australia (BCNA) and PRONIA struggling to raise awareness within this specific age group that is at the highest risk among women more prone to get cancer.

Last Tuesday, BCNA presented a new informative booklet written in the Greek language in order to help migrant women of Greek background who have been diagnosed with cancer and their families deal with the illness and learn top live with it, maximising their quality of life.

The booklet titled Metastatic Breast Cancer – Information for Greek women living in Australia, is a detailed guide designed to offer as much information as possible and answer any questions that women diagnosed with the disease and their families might have. Many of the women who have battled breast cancer came out winners and for a very long time hoped the nightmare belonged to the past, however, a few years down the track they found themselves faced with the same silent killer, in a different form.

A young Greek Australian woman, Penny Pandeloglou shared her own story; one of a young 14-year-old girl having to watch her mother wither and suffer throughout each day only to find out that after five years of being cancer free the battle was on for the second time. Penny was 19 the day her mother announced she was sick again and it has since been two years.

Here is her story, as she shared it with us:

“Nothing in life can prepare you for the moment your mum sits you down and tells you those words no child at the age of 14 expects to hear: ‘I have cancer’.

I still remember the day like it was yesterday, I was 14 at the time, when my mum took my sister Dora and me upstairs. She sat us down and took a deep breath; I could see in her eyes that she needed to tell me something serious. So I began to cry, not even knowing what she was about to tell me, but felt it was not good.

When mum opened her mouth and said the words ‘I have breast cancer’ my body just froze. I was in shock and I didn’t know what to say or do, I had never known anyone with cancer before. None of my other friends had parents that have had cancer. After a few minutes of crying, I asked the only question that I could think of. I hugged my mum and finally built up the courage to look her in the eyes and asked ‘Are you going to die?’

I was in the middle of moving schools during this time. I remember doing a tour of the school by myself because my mum was in hospital. I found it so hard to cope at that time because I didn’t know anyone my age going through the same situation. I learned how to grow up very fast. I remember sitting in class and just starting to cry, I was scared every day and it was so hard. I would be getting picked up from school and taken straight to the hospital to visit mum, whilst the rest of my classmates went off to netball training or to the movies.

Events like these can either break a family or draw a family closer together. Our family has never been so close and it was all because my mum, being who she is, went through two surgeries and radiotherapy still with a smile on her face and strength in her heart.

Mum kept checking on us to ensure we were coping well but she found it the hardest with my grandparents – migrants from Greece – who did not speak English very well. She found it strange that they did not want to tell anyone about my mum’s diagnosis and kept it private. All they did was turn to their faith and prayed and cried each day, and even wondered if she was given the evil eye.

Then mum offered my grandma the BCNA booklet in Greek. In the beginning she wasn’t strong enough to read it, but slowly we saw a change as she
started to understand more about the diagnosis and support the hope there is for a cure.

Four-and-a-half years on, mum was doing really well. Unfortunately, I discovered that life isn’t that simple.

Early April 2015 mum messaged Dora and myself asking what we wanted for dinner; I knew straight away that something was wrong. Mum never asks what we want for dinner, it’s usually ‘I’m cooking and you have to eat it’. I walked into a roast smelling house when mum brought me to the couch and sat me next to Dora and said those words I never thought I would hear ‘It’s come back’.

Life was going so well and because mum was being cleared for so long, it didn’t even click initially what she was talking about when she said ‘It’s come back’. Eventually, after I looked over to see Dora in tears and dad holding my hand tightly, I knew exactly what had come back. Mum continued to explain with a strong but scared voice that it had now travelled down to her lungs. This time I was older and knew exactly what that meant for her.

I didn’t cry after that night for a week, my body was in shock and still processing the news that I had been told. When I finally came to a realisation that things are going to change again, I broke down crying. I didn’t know who to call or who to talk to. Everyone was sympathetic but no one really knew what I was going through. It was hard, and I was angry at the world but knew I had to be the strongest daughter that I could be.

Seeing my mum go through chemotherapy was one of the most frightening things. As a kid, you never expect your mum to lose her hair, her lashes and her eyebrows. I wake up in the morning and say to myself ‘Today I’m going to be strong and remind my mum that she is beautiful no matter what’.

It’s hard seeing her struggle everyday, knowing there’s nothing I can do to fix this or make it better. I wish I could have taken away her pain and illness.
It was very hard seeing my grandparents once again react to the news that their daughter had breast cancer once again. They don’t speak good English and found the concept of a young woman with cancer very foreign. My grandma started supporting my mum in ways I never would have imagined:
– With fresh vegetables from her garden and lots of home remedies that she heard from her sister in Greece.
– She walked 10 kilometres in the Mother’s Day Classic two years in a row, wearing a pink outfit from top to bottom.
– She also came along to lunches where mum presented in Greek about her experience and journey of breast cancer.
– She even went to a chemotherapy session with my grandpa which was not such a great idea as the nurses did not know who to look after first – the cute grandparents crying or mum with a chemo drip.
– My grandma even booked herself into getting her breasts checked, something she had never done for over 10 years.

I am therefore so passionate on ensuring we educate women and girls from my age to my grandmother’s age, and it is essential to reach out to women who don’t speak English as their primary language.

It should not be fair that those women who don’t speak English, or struggle understanding English miss out on all the important information on this illness. That’s why I’m proud of my mum and my family; we are ambassadors of Breast Cancer Network Australia campaigning to ensure all women, regardless if they speak or read English or not, get empowered not only to understand primary breast cancer but also metastatic.”