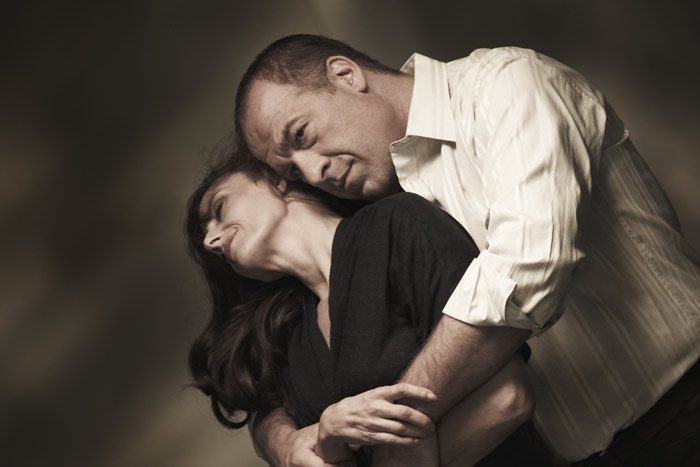 Tony Nikolakopoulos is an actor who has done it the hard way. He never changed his name and consistently fought against typecasting to establish a significant career in television, film and theatre.  “I chose to keep an obviously Greek name like Nikolakopoulos, but you can change your name but that’s just living a lie.”

Well, this time he is playing a quintessential Greek character in Steven Helper’s new music theatre Cafe Rebetika that opens at the Arts Centre in late April.

Cafe Rebetika is about the life, the music and loves of a group of rebetes, Asia Minor refugee fringe dwellers  living in the slums of Piraeus after the great population exchange with Turkey in 1921. The rebetes’ unique lifestyle and their music, rebetika, (Greek Blues) is the gel for the narrative of Steven Helper’s new musical theatre.

Nikolakopoulos has appeared in a plethora of theatre productions such as the Malthouse Theatre’s The Spook,  Ranters Theatre Co: Roulette, State Theatre Co: Courtyard of Miracles, and his television and film credits include Pacific, Underbelly, Stingers, Head On, and Tom White . He recently won a Melbourne International Film Festival award for his performance in the short film 296 Smith St.

Regardless of his impressive resume, he does not think that in Australia we have overcome hang ups about cross- racial casting as in the United States.
When quizzed on how it is to work with a non-Greek lover of rebetika like American expatriate Steven Helper, Nikolakopoulos says; “Steven is a music lover, he heard the emotional pain in the music, and once he found out about the background of the rebetika he became passionate about it and that passion has driven him mad, but it is going.”

Nikolakopoulos plays Stavrakas, the owner of a teke (a hash den) where Yiorgos the dope smoker, Grigoris the worker and Katerina the prostitute, all come to escape the poverty of their lives through the intense music of rebetika (Greek Blues). The epic love story of Stavrakas and Areti,a singer and refugee from Smyrna is at the centre of this work but she is murdered by a jealous rival, Nikos, and sets off a terrible set of events.

Nikolakopoulos was always keen to play a theatre version of Zorba and this is the closest he has got to it, “I expressed to Steven about my interests in staging Zorba the Greek and we looked at that. I was fascinated with that character, that existential element of it – where no one owns anything, and we tried to marry some of those elements into the character”

Stavrakas is also a maga ; “The maga” says Nikolakooulos,  “is a bit like James Dean, that has one element of the maga,” one who is not encumbered by mainstream values, adding “some have compared them to the old style mafia, where they take care of their own.”

The characters, like the real rebetes and mages of the 1920s – 1940s, were perceived as possessing a lack of morality by a new emerging bourgeoisie class in Greece who saw the rebetes as criminals and drug-fiends.

Nikolakopoulos says, “The mages were accepting of gays, hash smokers and junkies and women in their community were freer than the women in mainstream Athenian society.”

He adds, “They were marginal themselves, as refugees from Asia Minor and, in today’s terms, only people from say Iraq, parts of Africa or Afghanistan who come here as  refugees, may understand something about it.”

Rebetes created a new world of art and music to express their status, just like the African Americans did with the Blues and Jazz at around the same time. In fact it was in the slums of New York where Jewish Greek refugees mixed with Klemzer musicians to record the earliest rebetica music.

Cafe Rebetika! opens on April 22 and ends May 9 at the Arts Centre, and is supported by the acclaimed band Rebetiki (Achilles Yiangoulli, Argyris Argyropoulos, Tony Iliou and Takis Dimitriu).