If you’re looking for that traditional youvetsi recipe, or want to make a smashing Grecian dessert, Penni Pappas gives you a guide to the best cookbooks to try and buy 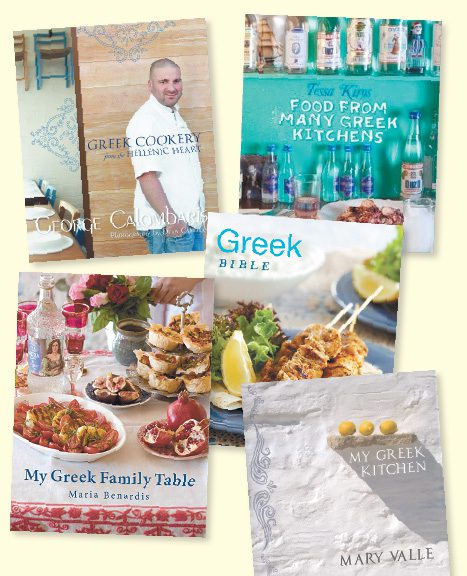 With so many Calombaris cookbooks to choose from, this takes the cake for hearty, traditional and wholesome recipes. Guided by his mother’s hand, George ventures through childhood culinary memories of Cypriot dishes and family table staples. He also gives away secrets to the many delicacies on offer at his restaurant Hellenic Republic, including a recipe for the breakfast spanakopita and poached eggs; peppered figs that sit atop saganaki and the rich moussaka served daily at the restaurant. This cookbook gives you an insight to George’s “Hellenic heart” as he takes you on his family and food journey through stories and photos scattered throughout the cookbook. Many handwritten notes grace the pages as you delve into George’s cooking life in the most honest and heartfelt way possible.
Icing on the cake: The section titled “My mum’s Greek Cypriot heart” takes you through traditional Cypriot no-fuss recipes like koupes and trahana. They might not be fashionable but they taste great.

Reading this cookbook is like going on a little Greek holiday as Tessa uncovers dishes from the mainland and islands of Greece. Using cooking methods that transport you straight to the horio, Tessa features really easy-to-make recipes that encapsulate the heart and soul of Greek kitchens. She uses Greek ingredients, such as cheeses and pasta, but ensures all are readily available in Australia. Tessa has developed areas dedicated to traditional, fasting foods and Easter foods for those wanting to partake in some Greek traditions such as vasilopita on New Years, fava for fasting, mageritsa and how to dye red eggs at Easter time. Icing on the cake: A Greek ABC graces the beginning of this cookbook highlighting some main players in Greek kitchens.

Maria celebrates a typical Greek family table the way she knows it and loves it in her cookbook. With over 100 recipes, the cookbook traces family favourites through recipes and stories of her memories of shared food experiences with her Greek family. The recipes featured have been handed down to Maria through the generations, skewing towards the ritual of celebrating food with love and family: sharing is always a blessing. This cookbook won the GOURMAND world cookbook awards 2009 – Best Mediterranean cuisine book in Australia.
Icing on the cake: Not only will you get your stock standard classics in here, but Maria samples some Greek flavours and ideas and puts a modern spin on it, such as her recipe for spicy ouzo keftedes and filo pizza with lamb.

Having worked in cafes and as the owner of the popular Terrace Deli in Melbourne, Yvonne says that cooking is ingrained in her. So when she was approached by her daughter to create a Greek cookbook, Yvonne went straight to her mum to come up with the Greek recipes that feature in this cookbook. From avgolemono to a variety of Greek dips to ideas on how to marinate meat, it’s all in here to try.

Icing on the cake: Yvonne has the attitude that everyone can cook Greek and this comes through every single recipe making it easy to use and cook from.

When a mum writes a cookbook there is automatically the warmth and love that a mother gives to feeding her family. Mary’s cookbook My Greek Kitchen came out of a need to ensure her children were still getting hearty and nourishing Greek food after they left the family home. Valle’s cookbook looks at the family meals such as pastitsio, yemista and spanakorizo. All of Mary’s recipes feature seasonal produce and easily available ingredients that can be created after a quick trip to the fruit and veg market.
Icing on the cake: This cookbook features the little nuances in Greek cooking methods, such as grating tomato and not dicing it.