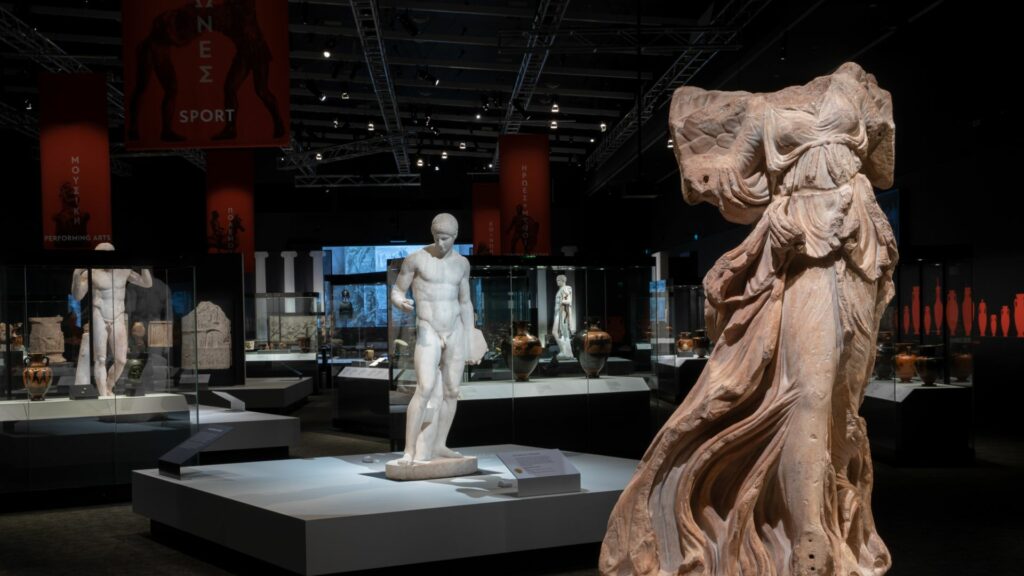 Winged Nike stands in the foreground of the exhibition at the National Museum of Australia in Canberra. Photo: George Serras

“We live around the sea like ants or frogs around a pond” Socrates, quoted in Plato, Phaedo 388BCE – 367BCE.

The pond which our ancestors inhabited is now bigger than it was in the ancient Mediterranean and Anatolian world. We the Diaspora extend across the Atlantic, Indian, and Pacific oceans.

As Diaspora, and as Greek Australians, we are compelled to visit Canberra for Ancient Greeks: Athletes, Warriors and Heroes at the National Museum of Australia. Ancient Greeks opened in December and will run until May 1, 2022. It took over twelve months of planning in the middle of a global pandemic to bring this important exhibition to Australia from the British Museum.

We are custodians of Hellenism and are obliged to ensure our culture, language, traditions, and civilisation continues. Ancient Greeks: Athletes, Warriors and Heroes is the recognition of our impact for over 3000 years on global human civilisation.

The exhibition features over 170 objects from the British Museum’s collection of Greek treasures, with artefacts from 800 BCE to 200 CE. The objects are from West to East, Athens (Αθήνα) to Halicarnassus (Ἀλικαρνασσός) in Anatolia, now Bodrum, Turkey.

The exhibition explores competition in our ancestors’ world, in sports, education, and the arts. It reflects on our heroism in the face invaders, and in wars amongst our own, as well as our myths.

“The legacy of Ancient Greece endures in our society today, and visitors will be mesmerised by the stories of competition in the Ancient Greek world and by the beautiful depictions of athletes, the ceramics, sculptures, armour and jewellery on show,” Dr Trinca said.

“We have so many glimpses of the life of women in Ancient Greece in this exhibition like the two terracotta figurines of women playing knucklebones, the elderly woman nursing a baby, and the colossal architectural fragments that helped me understand the story behind Artemisia who helped complete one of the seven wonders of the Ancient world the Mausoleum of Halicarnassus”

Dr Hartwig Fischer, director of the British Museum said that the objects exemplify the “spirit of competition so prevalent” in ancient Greek society.

“Whether in the field of sport, drama, warfare, politics or everyday life, the ancient Greeks were well known for their competitive nature, but these activities, often underpinned by conflict, were also positive and unifying force.”

One of the more astonishing objects include a block from a marble frieze depicting Greeks fighting Amazons which formed part of the Mausoleum of Halikarnassos, one of the Seven Wonders of the Ancient World (about 350 BCE). Mausoleum of Halikarnassos was commissioned by Queen Artemisia at the death of her husband Mausolus (thus Mausoleum) Artemisia was a queen of the ancient Greek city-state of Halicarnassus, in the Achaemenid satrapy of Caria in Anatolia, now Turkey. Another rare, and never toured object, is the tiny chalcedony gem engraved with the figure of winged Nike one of the finest examples of a Greek intaglio (engraved gemstone) from about 350–300 BCE.

Two other remarkable objects in the collection renowned for their beauty also feature the artists’ signatures. One is the black-figured amphora showing the Achilles slaying the Amazon Queen Penthesileia from 540–530 BCE, signed by Exekias, Athenian potter and painter. The other is a magnificent marble relief titled, Apotheosis of Homer from around 220–200 BCE signed by its maker, Archelaos of Priene.

What to expect in Ancient Greeks: Athletes, Warriors and Heroes

The exhibition is divided into six sections: Nike, Goddess of Victory; Sporting Competitions; The Performing Arts; War; Heroes and Myths; Society: Competition in Life and Death.

•    A black-figured amphora presented as a prize at the Panathenaic Games in Athens, it was once filled with 45 litres of olive oil. A rare example of its type as its lid has survived intact (333–332 BCE)

•    A terracotta sculpture of two young women playing a game of knucklebones. One version of the game was the Aphrodite throw, thought to predict the odds of getting married (330–300 BCE)

•    A Roman version of one of the most famous Greek athletic statues – the Diadoumenos – based on a Greek original by the sculptor Polykleitos in the 5th century BCE. A victor statue and a powerful study of the ideal male physique (about 120–140 CE)

•    Some of the astonishing objects include a fragment of a sarcophagus depicting warriors, from Klazomenai (modern Urla), Turkey (about 525–515 BCE). The

•    A large marble statue of an athlete, hero or god, which is representative of the ideal athletic physique (Roman version 1st century CE, after a Greek original 320–300 BCE)

•    A finely modelled bronze statuette of Herakles, legendary hero and founder of the Olympic Games (about 400–350 BCE)

•    An array of exquisite jewellery, including a gold necklace featuring myrtle buds and a lion-head pendant (about 450–400 BCE) v

•    A marble charioteer, a fragment of a frieze from the Mausoleum at Halikarnassos (never been shown internationally) (about 350 BCE)

Ancient Greeks: Athletes, Warriors and Heroes is at the National Museum of Canberra from 17 December 2021 to 1 May 2022. Tickets $28. Book here.

In Canberra let the Ancients guide you

When you are visiting your ancestors in Ancient Greeks: Athletes, Warriors and Heroes at the National Museum of Australia, remember that Canberra is home to other national attractions, sprawling vineyards, ancient Ngunnawal cultural sites, and forest walking and bike trails.

Canberra the only Australian city located in the bush can give you a city feel and within less than an hour you can be in the great Australian outdoors.

Feed your Hellenic love for culture, and the arts and equally Greek love for the elixir of a good life, food, and wine.

If you are a little more Spartan organise bike rides or bush walks i the forest. Neos Kosmos has compiled some ideas for your weekend away.

We as Hellenes recognise the significance of ancient cultures. So why not immerse yourself in the oldest culture in human history through the extensive collections of Aboriginal and Torres Strait Islander art and history at Canberra’s museums and galleries. Take a tour with a local Ngunnawal elder or try your hand at traditional First Nations practices at a workshop at the National Arboretum.

Consider the Heroes in Ancient Greece then visit the world class, Australian War Memorial, which like the Ancient Greeks, tells the stories of men and women that have served in the past, and continued to serve our nation in war, and humanitarian operations. The Memorial has exhibitions, artworks, large technology objects personal, personal histories that narrate tell the story of our Australians heroes. Australians who like Ancient Greeks made the ultimate sacrifice in pursuit of freedom from tyranny and in assistance to others to find their liberation.

Enjoy world-class art exhibitions at the National Gallery, located on the shores of Canberra’s Lake Burley Griffin. For the Ancient Greeks art was not for rulers, priests, or tyrants – it was by and for the people. Art was imperative to civic development. So be like your ancestors and meander through the galleries admiring the great collection, including the famous Blue Poles by Jackson Pollock and the Ned Kelly series by Sidney Nolan. The Aboriginal and Torres Strait Islander art collection comprises over 7500 works and is the largest globally and we as inheritors of an ancient history and culture understand the importance of respect to other ancients.

The works we gaze on in Ancient Greeks were contemporary 2500 years ago. Moreover, their impact on contemporary arts practice continues. Canberra Contemporary Art Space is a gallery in which contemporary artists, like those in Ancient Athens, can create daring new work that energizes the arts. Exhibitions by local, national, and international artists, in CCAS introduce audiences to exciting new ideas and media.

If you love languid arcadian delights and seek eudemonia – happiness and well-being – then Haig Park Village Markets is for you.

When in Canberra visit the beautiful leafy grounds of Haig Park, Braddon moments away from Lonsdale Street’s boutiques and cafes.

Haig Park Village hosts the region’s best local farmers and producers every Sunday. The farmers and food market will delight your senses with diverse cuisines, fresh produce, and artisan products.

At the Haig Park Village has live music, food and other exciting activities for children and adults alike.

If you are more Spartan than Athenian and love physical activity in the great outdoors, then Stromlo Forest Park is for you. Located only a fifteen-minute drive from Canberra’s city centre make a dash for the forest.

Running, walk, mountain bike, cycle, or horse-ride in this world-class facility. The Vapour Trail network is designed to allow rider progression from the top of the mountain down to the bottom so there’s plenty of opportunities for people to develop their skills and progress as riders.

With trails and tracks for all levels, and a criterium cycling circuit, Stromlo Forest Park is ideal for professionals and rookies alike.

For many Greeks, the polis is the centre of all life, so Canberra’s CBD won’t disappoint. This modern city has an exceptional array of restaurants, cafes, and watering holes. Create your own symposium with great cuisine, fine wine, and craft beer.

Of course, all Greeks recognised philoxenia (friend of strangers) and Fillos Taverna and Bar is where all filoi (friends) meet. It is the Hellenic Club Woden’s newest Greek dining experience. It has the best of Greek street food and modern dining. It is a dining experience you won’t find anywhere else in Canberra.

Breakfast and brunch are taken very seriously in Canberra – French toast, acai bowls with all the colours of the rainbow, and scrambled eggs with a twist. The foodie haven of Braddon will awaken your appetite and popular brunch spots includes Pollen Café in the Australian National Botanic Gardens and The Cupping Room in New Acton.

After a long morning at the Ancient Greeks, satisfy your hunger at Rebel Rebel, which is famed for its seafood dishes, or the paddock-to-plate philosophy at Pialligo Estate.

We all know that both Ancient and Modern Greeks and wine go hand in hand. Canberra has over 40 wineries within 35 minutes of the CBD. So, pair your κρασί, with a charcuterie board at Lerida Estate, wood-fired pizza at Four Winds Vineyard and delicious views at Brindabella Hills Winery