After being exposed to the horrific realities of humanity’s impact on the environment, founder of My Green World Natalie Kyriacou is on a mission to educate and empower young people about wildlife conservation for a brighter future Natalie Kyriacou, founder of wildlife conservation organisation My Green World, has been named as part of Forbes’ 30 Under 30 Asia 2018 Social Entrepreneur list, which she says she didn’t see coming.

“It was an honour to be recognised,” Kyriacou told Neos Kosmos.

“Most of the work I do can be quite gruelling . . . and sort of a lonely journey as well, so to have that recognition, it’s nice to have an institution back you, it feels good.”

Born in Melbourne of Cypriot and English heritage, she says she was particularly pleased to see diversity in leadership; more women, from more backgrounds, and more people fighting for social and environmental justice.

“It felt really nice to be part of that team . . . I would have loved to see more female role models when I was a little girl and it’s nice that I could potentially be a role model for somebody else,” she enthuses.

There’s no denying Kyriacou is a strong entrepreneurial role model, and also one in being humble.

A qualified journalist, it was while pursuing her interests in wildlife and conservation in Borneo working with young organutans and writing about palm oil, and later in Sri Lanka working with elephants, that her career trajectory veered away from becoming a foreign correspondent to where she is today; a social entrepreneur and wildlife conservationist.

“It was those two places that had the biggest impact on me,” she reveals. “It exposed me to some pretty horrific stories about humanity’s impact on the natural world, but it was also just an incredible learning experience.”

Exposed to issues from around the world, she also noted a disconnect for many people in Australia, both young and old, with wildlife and their environment.

This observation set her on a mission to find a way to engage, especially with young people, on global environmental issues internationally and at home.

After returning to Melbourne to undertake her Masters in International Relations, she came up with a concept that went from being a passion project to the globally recognised organisation, My Green World. Officially registered in 2015, My Green World has since partnered with a number of charities around the world, including Arcturos in Greece, focused on saving the brown bear and its habitat.

But it really gained momentum in 2016 with the launch of her gaming app World of the Wild.

“My Green World started because I basically saw a problem that I wanted to address,” she says.

“Coming back to Australia and seeing young people so engaged in mobile game apps and various games that generally promoted violence, I wanted to find a way that if they were going to play games, I wanted them to play a game that was more impactful and educational and empowering for them.”

Her idea was to create a game in which children would participate in virtual conservation scenarios and support charities around the world, with everything they did within the game replicated in the real world so that they were actually contributing to environmental and wildlife conservation.

Today the app has 10,000 active users, and has had a positive response with plans to expand on its scope in 2019. Kyriacou’s latest focus over the past 12 months has been on a new educational program called Kids Corner set to launch next week.

After conducting extensive research and surveys with educators, parents and children, it became clear that people can often feel overwhelmed by the complexity of issues such as climate change, and so feel unable to actively participate in global wildlife and environmental issues.

In a bid to address this, Kids Corner aims to make wildlife and the environment fun, cool and positive, while unpacking complex issues into simple concepts that children can understand.

Kyriacou is particularly passionate about inclusivity, and has ensured her program caters to a range of learning styles, abilities and low socio-economic regions of Australia, along with children in hospitals.

“I think traditionally businesses, as well as governments and schools, have treated education as something that is imposed upon a group of people, and that can often be disempowering for a lot of children. I hope we provide them with all the resources and tools that they need for them to thrive rather than imposing it on them,” says Kyriacou.

“We want every child to have access to this education and be part of this movement to create a better planet.”

The program covers everything from learning about different species, evolution, natural selection, and habitats to laws and wildlife and environmental institutions.

Reflecting on her own education as a young child, which she says was lacking in these areas, Kyriacou is passionate about informing young people about these issues as they will essentially be inheriting them.

“It’s important for them to understand how broad and interconnected these issues are. For example, teaching them about the bee and how the bee will affect global food securities, and how the extinction of one particular species can unravel an entire ecosystem and that habitat provides understanding about the balance of environmental issues that are incredibly fragile and all interconnected. Our food and livelihoods, our access to water and resources, is very much dependent on the other species and how they interact in the world, and I think that’s incredibly important to understand,” she says.

While Kyriacou aims to advocate about the environment in a positive way, as opposed to pedalling doom and gloom scenarios, she says there’s no denying that we are borderline facing a crisis.

“I think it’s easy to turn a blind eye if you’re living in or around the city it might not be so easy to see but there is a point that will come that it’s too late to take action – we’re nearing that point now so there needs to be some radical transformational changes in behaviour and lifestyle if we’re going to address these issues because it could be quite catastrophic.”

It also doesn’t help that environmental issues are overly politicised with leaders more caught up in debating the existence of climate change than taking action.
So for now she is doing what she can to empower the next generation to take the reigns and act. 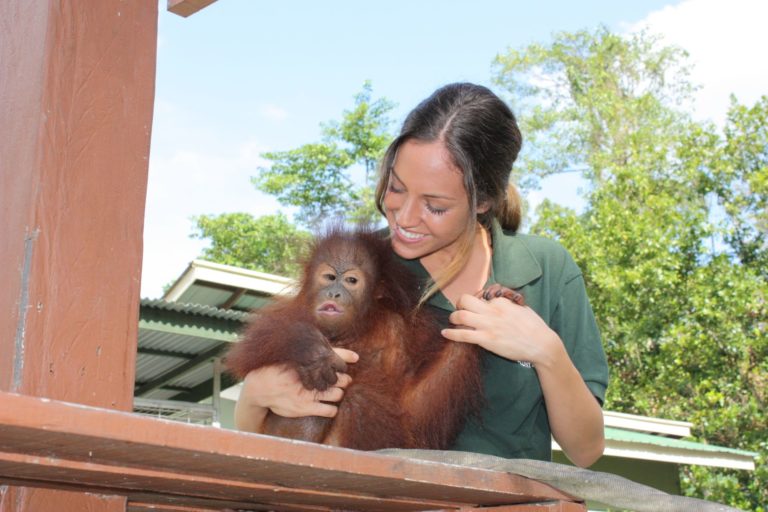 Aside from looking to expand My Green World to provide unique education resources around the world, Kyriacou has a number of big plans on her radar.

“I would love to launch a line of children’s books and in the future we’d have to evolve and adapt to the rise in technology, so I’d like to have classrooms to teach children more about technology and virtual reality and how we can work that into wildlife conservation,” she says.

One initiative in the pipeline that is particularly close to her heart is to build women’s capacity to pursue a career in the sciences.

“There’s so many things I want to do when I grow up, but I realise I’m already a grown-up now!” she laughs.

While she says she was surprised to make the Forbes list, that is the last thing anyone else is thinking when it comes to the 30-year-old’s achievements. Driven, determined, and with her heart in the right place, it’s almost a relief knowing there are people like Kyriacou in the world.

“My hope is that adults, businesses and schools actually see children as strong people in their own right who can play a significant role in their own education if we give them the freedom to explore their creativity and curiosity,” she says.

“I think if we create diverse education platforms that cater to a wide range of people then you’re just going to have a much more educated, engaged, empowered community.”

Find out more about My Green World at mygreenworld.org/