Archbishop Stylianos, the Primate of the Greek Orthodox Church of Australia for the last forty-four years, was laid to rest on at Sydney’s Rookwood Cemetery on Saturday after funeral rites were conducted at the Archdiocese Cathedral of the Assumption.

Thousands of faithful gathered from across the country and joined dozens of priests, officials and dignitaries – including the Premier of New South Wales, Gladys Berejiklian – in farewelling the long-time leader, distinguished poet and spiritual father of Australia’s Greek Orthodox believers.

Following from Friday’s arrival and public veneration, the Cathedral remained open overnight for prayers and for the public to pay their final respects. Among the constant exchange of people was Eleni Emvalomas, who attended from after 1:30am on Saturday morning with her father.

“My dad and I both wanted to attend the Trisagion service, but both didn’t get a chance,” Eleni, a 2015 graduate of All Saints Greek Orthodox Grammar School said.

“To be in the midst of the Archbishop during those intimate hours was humbling.”

READ MORE: 50 photographs depicting scenes from the funeral and burial of Archbishop Stylianos

After the Hierarchical Divine Liturgy began the Funeral service proper at 11:30am, albeit delayed by ten minutes as Premier Berejiklian arrived and took her place in the prominent front pew of the Cathedral, alongside Federal Liberal Senator Arthur Sinodinos, representing the Prime Minister, Scott Morrison, Federal Labor MP, Anthony Albanese and the former Father of the House, Philip Ruddock.

Metropolitan Panteleimon of Vryoula, who had been sent by the Ecumenical Patriarchate as its official representative, was joined by Bishops Seraphim and Ezekiel, priests and the choir, but also by many within the congregation, in chanting ‘May His Memory be eternal’ before concluding the service at the Cathedral with an address read on behalf of the Patriarch.

READ MORE: Scenes from the funeral and burial of Archbishop Stylianos

Chartered buses were loaded with schoolchildren and clergy as Cleveland Street was sectioned off, and a mounted police escort accompanied the hearse carrying the Archbishop’s coffin through busy Saturday midday traffic as church bells rung and pedestrians looked on.

Paul Kalabalikis, a member of St. Nicholas’ Church youth group, was one of the onlookers and described paying his final respects to the fallen leader.

“Our Captain has left his ship,” he said.

“Seeing how much he’s done as an Archbishop of our Church throughout all these years is amazing.”

Over half an hour’s drive away, Stylianos was buried behind the eastern end of St. Athanasius’ Chapel in Rookwood cemetery. Several thousand people made the journey from the Cathedral to the final resting place of the Archbishop, where more than thirty priests collectively chanted ‘Christ is Risen’ at his grave.

The grave was flanked by a number of young men and women from the local Cretan Association, dressed in the Archbishop’s native costume and paying their respects by standing watch and singing lamentations in Cretan dialect while the congregation offered roses and said their last goodbyes.

“Being in costume made me feel privileged and honoured,” Ari Paraskakis, a member of the Sydney-based group, said.

“I may not see another Greek Archbishop who is also a Cretan, so today and having him over the years made me feel a connection with him and a sense of patriotism.”

READ MORE: The life and times of Archbishop Stylianos in 12 photos

Alexander Vounisios, a member of the Cretan Brotherhood of Melbourne and Victoria who flew to Sydney and also wore traditional costume, concurred with Paraskakis’ sentiments.

“It brought the Greek community of Australia together, as many of us travelled from interstate to pay our respects to this spiritual leader,” he said.

“We wanted to honour His Eminence’s Cretan heritage and show our support to the wider Greek community.”

Having said their final prayers, the dozens of priests departed and allowed for the last of the congregation to pass by Stylianos’ grave, which continued past 4 o’clock in the afternoon. 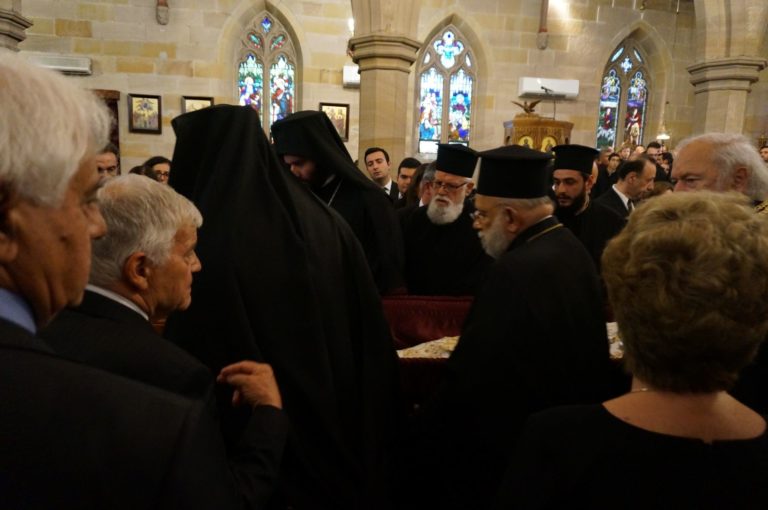 Father Athanasios Giatsios, parish priest of St. Catherine’s Church in Mascot, admitted that Saturday in particular had been “very emotionally draining” and reflected on his time under the Archbishop’s stewardship, both as a clergyman and as a student of St. Andrew’s Theological College, which Stylianos had established back in 1986.

“As a graduate of [the College], I feel extremely honoured to have been taught by His Eminence,” he said.

“He loved the College since it was his creation, his dream. He treated us – the students – like his own children, striving always to instil in us a sense of awe and true fear of God through the path of humility and honesty. His pastoral sensitivity in certain matters made me appreciate the depth of his spiritual discernment.

“I thank God for giving me the blessing of having His Eminence as my Shepherd and Father.”

After more than four decades as the leader of the Greek Orthodox Archdiocese of Australia, Archbishop Stylianos was the first Church leader to be buried in Australia since Theophylactos, Metropolitan of Australia and New Zealand, was laid to rest in 1958.

“I am certain that his Eminence is how with God,” continued Father Athanasios, “and that he will always be praying for the wellbeing of his spiritual children here in Australia.

“May His Memory be eternal!”