More than 5,000 Victorian children will have an opportunity to learn another language while attending kindergarten this year, due to significant investment from the Andrews Labor Government Will Fowles, the member for Burwood, enjoys watching kids of all nationalities learn the Greek language in Ashburton.

Will Fowles, the member for Burwood, was effusive about the Andrews Government’s latest language initiatives at the launch of the Greek Language Program at Clever Kids Child Care in Ashburton, which is part of the $17.9 million investment into the Early Childhood Language Program.

Clever Kids Child Care is one of around 160 early learning centres across the state that will deliver a language programme this year.

He added that he was “proud that the Andrews Labor Government is supporting three of these language programs in the Burwood electorate”.

“Over 5,000 Victorian children will learn another language while at kindergarten this year,” Fowles said while highlighting the “$18 million dollars second language learning opportunities at kindergarten level” the Victorian Government has committed to.

“We know 80 and 90 per cent of kids’ brain development happens before five years old and learning another language has many benefits, including improved reading and writing, strengthened brain development, and better problem-solving skills, and it instils an early sense and commitment to multiculturalism. They will grow up knowing that we are not just an Anglo Saxon society,” Mr Fowles said.

On the question of whether it is possible to grow up in Victoria thinking it is not a multicultural society, Fowles said it “depends where you live and it is our commitment to multiculturalism and language learning that has made this program possible.”

READ MORE: Experts explore the prospects and challenges of the Greek Language in Australia 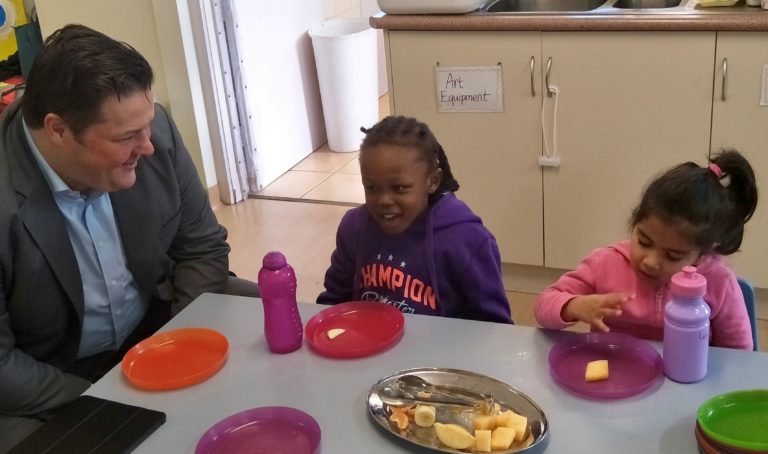 Weekly language sessions of up to three hours will be delivered in about 150 kindergartens, and a further 10 will be bilingual kindergartens, where children will benefit from half their program being offered in a language other than English.

These programs include in a range of languages including Mandarin, Punjabi, Arabic, Italian, Vietnamese, French, Spanish, and Aboriginal languages.

“This funding is there for four years and it looks like it may be continued,” Mr Fowles said, adding that Tuesday marked the launch of three of these programs in Burwood in Greek language and culture.

Fowles highlighted that this initiative was “an Australian first with the Labor Government investing up to $5 billion over the next decade to deliver a full 15 hours-per-week kindergarten program for three-year-old children, to be progressively rolled out from 2020″.

Governments in Victoria, Labor and Libera;, have traditionally been supportive of language learning. However one of the concerns expressed by the Greek Community is the increasingly limited primary and high schools that students can learn Greek.

“It is my understanding that he primary and high schools select their curriculum however that is an issue to be taken up at ministerial level,” Mr Fowles said.