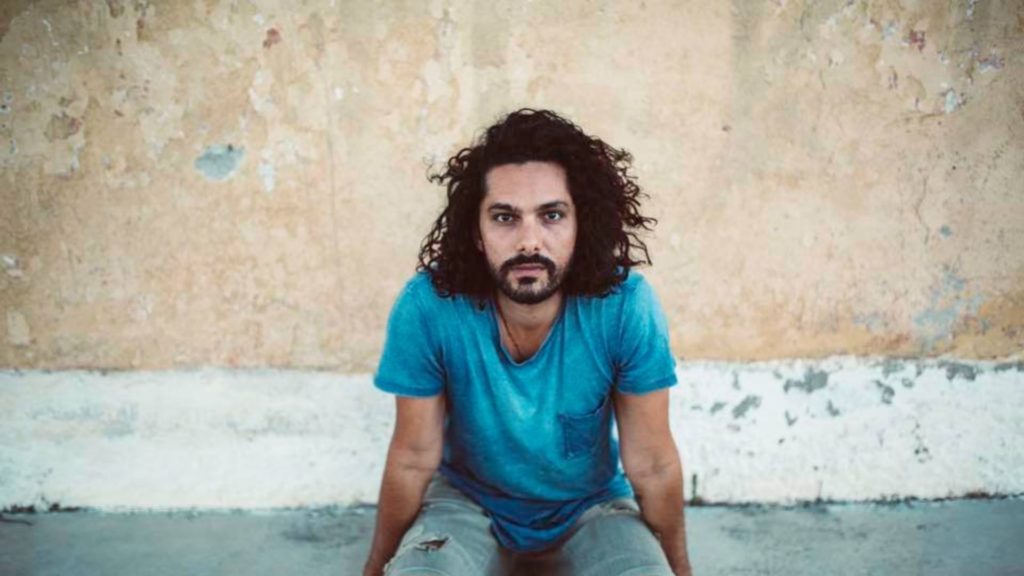 With the 2019 High School Certificate approaching later this year and his performance poem, ‘May Your Pen Grace the Page’, being a core text for Year 12 English’s Module C ‘The Craft of Writing’, and the national ‘Welcome to Paradox Tour’ this month, it is shaping up to be another big year for Australian poet Luka ‘Lesson’ Haralampou.

From the outset of the interview, Luka’s strong Greek heritage becomes apparent. While his mother, Christina (Batounas) from Aigio migrated to Australia in the 1950s, his paternal grandfather, Haralampos was a pioneering pre-World War II migrant from Monolithos, Rhodes, who later married Anastasia and settled in Brisbane, where his father, Philip was born. As Luka points out, “Brisbane’s Greek community gravitated to the suburb of West End and our family was one of the original Greek families to settle there.”

In one of life’s many ironies, Luka annually visits his grandfather Haralampos’ village for the week-long poetry retreat there, where poets form all over the world participate, and wonders what his grandfather would have thought about this.

“I doubt he would have fathomed this full-circle moment of me teaching in the place that he left so long ago, and doing it every year.”

Born and raised in a Greek household, Luka explains how Brisbane’s Greek community was very small comparatively to larger centres, like Melbourne and Sydney, and this had the advantage of developing a very warm, close-knit community and the disadvantage of fostering a mainly generic and predictable Greek identity: “It was like a time capsule of Greeks projecting the Greece they left behind onto each other”.

Now living in a city with such a large Greek community as Melbourne, all the subsequent interactions and experiences impacted his perspective of what Greek identity truly was.

“Being Greek was not just wearing a Greek football jersey and listening to Sfakianakis 24×7. In Melbourne, you could be vegetarian and Greek, or a poet and Greek. Into heavy metal and Greek. I felt like for the first time I could be Greek, just by being myself. I remember I saw my cousins playing cricket – Greeks actually playing cricket,” he says, laughing, “something that reminded me only of the local Aussie kids playing Cricket in Brisbane!”

Inspired by the need for freedom of speech and his preoccupying political discourses at the time, as well as experiencing a difficult phase in his personal life, he found an expressive outlet though poetry.

“It definitely got me out the other end of a difficult time,” he says, and it was during this process he realised his self-contentment and satisfaction in writing and performing poetry.

Deciding to quit teaching and pursue his poetry, it naturally drew people’s reactions of being highly risky – as the stereotypical perception is that people could not possibly pursue a career in poetry. Reflecting on this time, Luka believes “the intellectual decision may have initially gotten in the way but, for the heart, it was quite natural. This was me. As an Olympic runner goes for a run every day, as a poet, I was writing every day. This is what I wanted to do with my life”.

At the time, however, performance poetry had a relatively small appreciation and audience; it was still developing into the cultural and artistic landscape it is today. There is now a strong community which appreciates this distinct form of poetry and its expression, there are many performance poets who have definitely created an artistic movement and Bankstown’s Poetry Slam is the largest event of its kind in the southern hemisphere.

Asked if he would regard himself as a ‘pioneer’ in the art form of performance poetry, Luka humbly points out that he first entered a performance poetry competition in 2007 and it took another five years to quit his ‘day job’ to pursue this career, and there were so many others working very hard at the time. But what may have distinguished him from other artists was his strong belief in ‘edutainment’ – of prompting people to think about matters and concerns – and inspiring others.

“I may not sell the most books or works but my position in life is to use performance poetry as a means of kicking down the door for others who feel inspired to express themselves too,” he says.

What Luka has also realised is the universal appeal of performance poetry, as so many themes and message are empathetic to audiences.

“My poem ‘Yiayia’ may have been inspired by my own grandmother and it captures a Greek experience, but I have performed the poem in China and South Africa and members of the respective audiences have approached me to say their grandmother is exactly the same.”

One of the recent highlights for Luka was being commissioned to perform with the Queensland Symphony Orchestra in Brisbane. Collaborating with Gordon Hamilton, Luka wrote a 20-minute poem, an interrogation of Governor Lachlan Macquarie, where every spoken word had to be precisely timed to the accompanying music. As Luka explains the choice of subject matter, “Macquarie may be a celebrated figure (i.e. governor) in contemporary Australian history but he also ordered the first government sanctioned Aboriginal massacre in Appin in 1816.”

What also made the event so special was his family was in the audience which he says, “felt like the prodigal son had returned…”

A major development in Luka’s works is obviously his poem, ‘May Your Pen Grace the Page’ being included in the English HSC’s Module C’s ‘The Craft of Writing’. He recalls finding out about NESA’s decision, “I had no idea my poem had been included as a core text in ‘The Craft of Writing’ module. I received all these calls from teacher-friends asking me, ‘Do you know that your poem…’ and I actually had no idea,” he laughs.

“Seriously, it is great just to have a performance poem on the curriculum and for HSC students to study it. Year 8 students now write and perform poetry in preparation to study my poem in the HSC years later and this also highlights how important performance poetry has become for students’ self-expression,” Luka adds.

Like all artists, Luka is continually evolving and challenging himself, as he enjoys being ahead of himself. He has now begun including music to his poetry and there are plans to make an album which will be more musical than what he has done previously.

“As an artist, I want to avoid categorising my work as being poetry ‘poetry’ or ‘rap’. It seems quite natural to write something as a poem and then perform it. So, it is a natural progression to be able to sing over it and include music too.”

Currently touring his latest single ‘Welcome to Paradox’ with multi-instrumentalist, Meena Shamaly, catch them in Sydney on 14 and 23 August.

READ MORE: On the ‘phenomenon’ that is poet Dimitris Troaditis