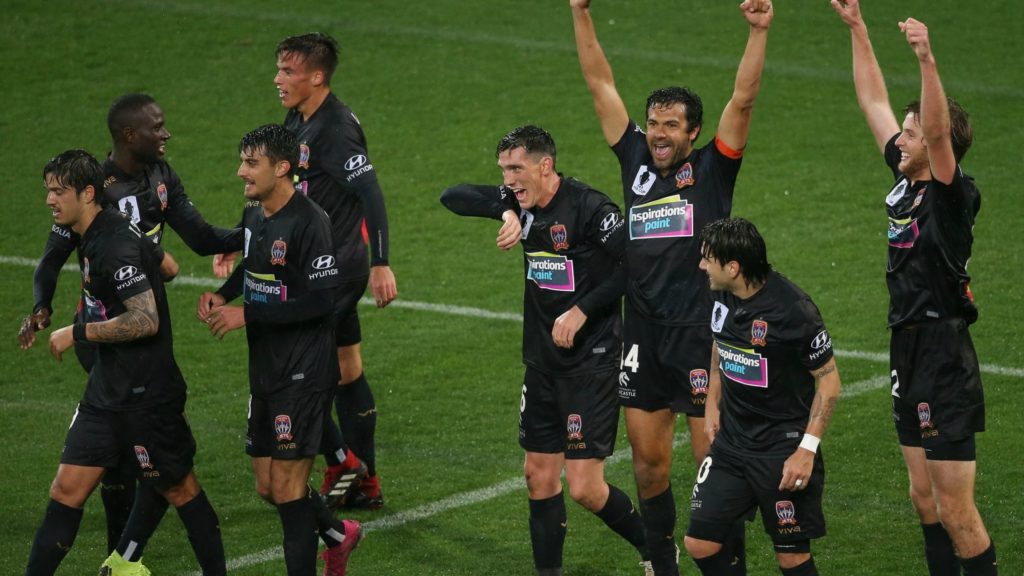 Spectacular goals by Newcastle Jet’s Johnny Koutroumbis and Dimi Petratos, as well as Adelaide United’s Nathan Konstandopoulos, helped their respective teams to win midweek in the FFA Cup Rd of 32.

On Wednesday evening, Konstandopoulos marked his 50th Adelaide United appearance with a 56th minute goal in front of over 4,000 Melbourne Knights fans at Knights stadium in Sunshine. His goal for the visiting Reds, came with the Knights trailing 2-1 and pushing for an equaliser against the defending FFA Cup holders after the break. However, Konstandopoulos’ unstoppable shot, together with Riley McGree’s goal four minutes later, effectively extinguished any Knights hopes of a comeback by extending the visitor’s lead to 4-1 before they eventually ran out winners 5-2.

Nice way to cap your 50th appearance for the Club!

Meanwhile over at AAMI park, Melbourne Victory and Newcastle Jets played out an FFA Cup thriller, with the Jets overcoming a two goal deficit by scoring twice in the last 15 minutes to send the match into extra time. Jets defender Koutroumbis launched the comeback with an excellent long range strike in the 74th minute before team mate Dimi Petratos equalised with a trademark thunderbolt seven minutes later. The visitors then scored an extra time winner through Patrick Langlois.

In other FFA Cup action on Wednesday, last season’s A-League grand finalists Sydney FC and Perth Glory suffered early Cup exits at the hands of last season’s A-League strugglers Brisbane Roar and Western Sydney Wanderers respectively. Robbie Fowler’s Brisbane Roar upstaged reigning champions Sydney FC by 2-0, whilst Western Sydney Wanderers came away from Perth with a 2-1 victory in a match that was scoreless until extra time. Both teams scored in extra time to make the score 1-1 but with the match seemingly headed to penalties, the Wanderers’ Kwame Yeboah scored a late winner. Yet another upset occurred in Brisbane where NPL club Brisbane Strikers knocked A-League club Wellington Phoenix out of the Cup in a penalty shootout after both teams were locked at 2-2 after extra time.

Wednesday evening’s matches completed the Rd of 32 games, and the draw for the Rd of 16 took place immediately afterwards. The two Greek-based NPL clubs remaining in the competition face contrasting challenges. Both Adelaide Olympic and Brisbane’s Olympic FC have drawn home ties.

Round of 16 matches to be played across two match days: 20 and 28 August (4 matches per night)