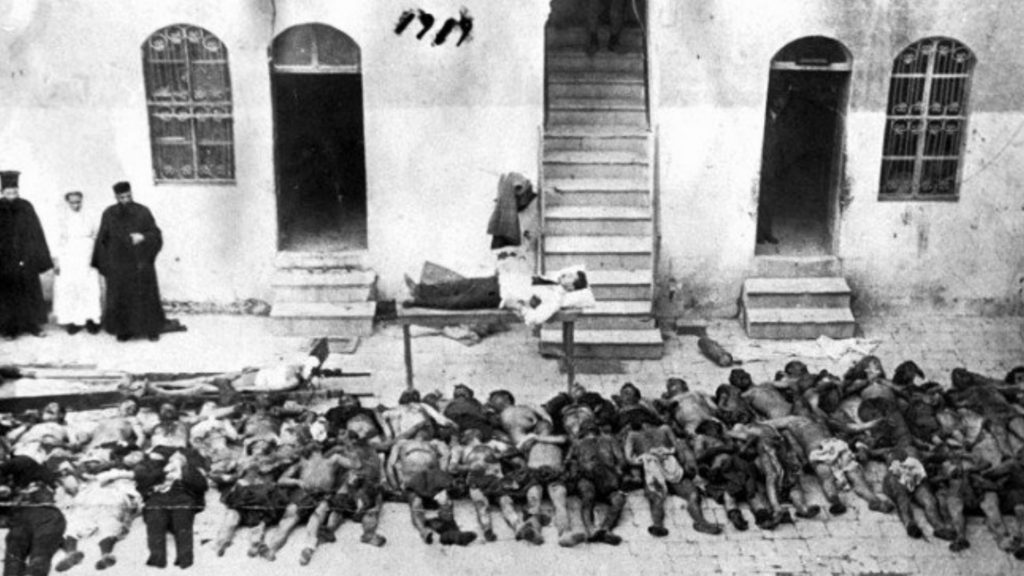 Pontian Genocide was the systematic killing of Greeks carried out during World War I.

I watch them laughing. Playing together without a single care in the world… oh wait. Here we go. Maybe one care now that Stelios has stolen that dolly off Marina. Despite these little quarrels, I could not be happier for my grandchildren. They remind me so much of myself, yet at the same time, they are so different. I can see it clearly when I look into their eyes and see innocence and joy, which were not reflected in my young eyes. To this day, I still cannot forgive the atrocities that were inflicted upon us by the Ottomans. Marina strides up to me, face full of purpose and determination.

“Γιαγιά! Κοίτα τι έκανα o Στέλιος! Πήρε το κούκλα μου!” she declared, her broken and grammatically incorrect sentences making me smile with affection. Instead of telling off my youngest grandchild, I call out to him and my three other grandchildren playing in the corner, to come over and sit with me.
I close my aged and tired eyes, considering how much I should tell them. Although my sweet grandchildren are slightly older than I was at the time, they shouldn’t have to listen and relive the trauma that I did. But they need to know and remember the victims of the horrors that were the Pontian Genocide.

I decide to tell them half of my story, saving the rest for when they are older.

“Children, I have a story to tell you, and I need you to listen and remember that sometimes, it is not worth fighting over a dolly. When I was young, about five or six years old, the Pontian Genocide commenced…”

Screams that will haunt me for the rest of my life fill my ears. From my crouched position, I am being shushed by my fellow villagers, even though I can’t help the rumble that has escaped my famished stomach. Although there is nothing in my stomach, I feel it churn with the horror and disgust of witnessing our defenceless, Pontian friends being whipped. No one can stop it. Trust me, I know.

I have seen what happens when we fight back. We are too few, and too powerless against the relentless, unforgiving enemy. I have seen men, women, children like me, dead, at the mercy of the Ottomans. One man, upon seeing his wife and child being whipped had stepped in to defend them, only to get held back to watch his family suffer a long drawn out death, then, be subjected to the same fate himself.

I still shudder at the memory.

I don’t know how I am surviving. I shouldn’t be alive when everyone else is not. My young age works to my advantage as people feel that they are obliged to take care of me. Nevertheless, I have seen what they do to their babies. Mothers, forced to hang their children with their own shoelaces so that they would not be heard. They have no option. Either they betray us, or we silence them. I am strong and have learned to stay quiet, but I wonder when it will be my turn.

When will this stop? I have no childhood. I have been on the run. I have no family. They died in the latest attack. My parents and I, along with others on the run had hidden in a village where we thought we were safe. We had become a little community, once again. We should have known better. But we will be wiser next time. Or at least I will. I can’t speak for my parents anymore.

I woke to the smell of fire and burnt flesh. Panicking, I saw the orange flames licking the building everywhere I looked. I couldn’t escape. I noticed a small opening in the wooden wall that only I could fit through.

I looked back, only to see my parents through a window, but there was no way to reach them. As our eyes met, flames engulfed them and that was our final farewell.

Now at 14 years of age, I have spent more than half of my life alive, yet barely living. I feel hollow inside. I need to flee.

The group of people that I am travelling with can only think of one option.

I will attempt the impossible. I have heard stories from others who have watched those drown, attempting to flee, but I am not one of them. I have to believe it. I tell myself every day that I will make it. If only just to escapethe pain. Death would be preferable to rape by those vile creatures that I have learned to hate.

I am one of the few who make it. I am a survivor. I will make sure that my story is known.

READ MORE: Neos Kosmos is giving young people the chance to have their voices heard

I look down into my grandchildren’s wide, innocent eyes. They are quietly sitting in front of my rocking chair. I feel a sense of pride as Stelios gently passes the dolly back to Marina. The crackling sound of the fire echoes in the room. The fire that was raging in the hearth at the start of my tale has died down. Only embers are left. They constantly remind me of times that once were. The lives that were lost. I will make sure THEY will never be forgotten. I take a deep breath as I finish telling the simplified version of my life story. One day they will know the whole truth. For now, they need to learn that there are more dire things in the world than a stolen dolly. So much more was stolen from us…the truth cannot be denied. Sadly, what took over a millennium to build, took only a decade to destroy.