End of an era for Bishop Nikandros; Australia bids farewell after 19 years of service

“Australia was and will continue to be your home,” said Archbishop Makarios 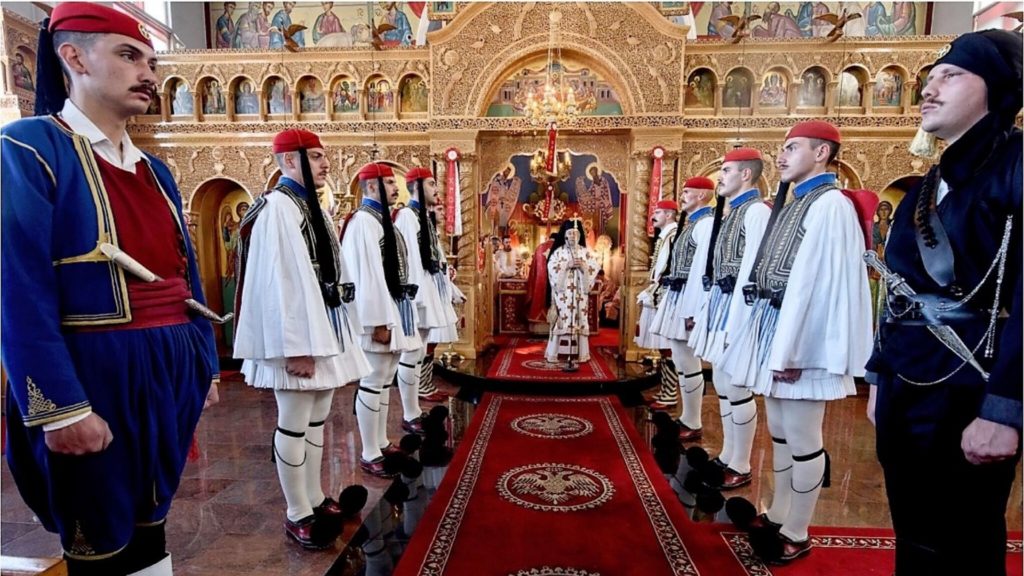 Bishop Nikandros welcoming the Members of the Hellenic Presidential Guard in SA earlier in the year.

Bishop Nikandros of Doryleon has been elected by the Holy Synod of the Ecumenical Patriarchate as the new Metropolitan of Eirinoupolis. The 72-year-old cleric is leaving Australia after 19 years of service.

Born in Karystos, Bishop Nikandros (Nikolaos Palyvos) studied at the Theological School of the National Kapodistrian University of Athens, and in December 2000, on the recommendation of Archbishop Stylianos, was unanimously elected by the Holy Synod of the Ecumenical Patriarchate of Constantinople for the post of assistant Bishop to the Archbishop.

He has been longest serving assistant Bishop of the Greek Orthodox Archdiocese in South Australia, Western Australia and Northern Territory.

“Bishop Nikandros will be missed immensely by the Greek Orthodox people of South Australia. He contributed to our community through his spiritual guidance and his ability to be a calming presence during difficult times. I will personally miss his advice and his ability to always listen when needed. I wish him all the best in his role as Metropolitan and I am sure he will always have a special place in his heart for Adelaide as he will always have a special place in our hearts for his contributions, work and efforts,” said Labor MP Steve Georganas.

The new Metropolitan was ordained Deacon in Greece in 1969. He served at The Holy Metropolis of Karystia and Skyros until 1989 and then was appointed at the Saint Alexander Orthodox Church in Palaio Faliro and at the Metropolis of Nea Smyrni as Secretary of the Holy Metropolis. He also taught Theology in secondary education for 18 consecutive years.

“Bishop Nikandros’ ministry which spanned over 19 years was one served with integrity, honesty, obedience and dedication to the Holy Archdiocese of Australia, vigilance, love and above all humility, in a very crucial period for our Church in Australia. His ministry enabled an increase of non-Orthodox Christians converting to the Orthodox Faith, through missionary outreach which catered for the Australian reality. As a result of this effort and with the blessings of the late Archbishop Stylianos of Australia, Bishop Nikandros ordained to the Holy Priesthood two converts who have been shining lamps for our Church in South Australia,” said Father Michael Psaromatis, who received his ordinations to the Holy Diaconate and Holy Priesthood from now Metropolitan Nikandros.

READ MORE: An emotional farewell to our Evzones; Thank you for making us proud!

During his service, Nikandros’ ministry oversaw the rejuvenation of the Orthodox Youth in South Australia with the creation of the St Stephen’s Central Youth Committee which was integral in the growth and sustainability of the youth programs and participation in the State.

“He was always the first one to give financial assistance and to coordinate and give the blessing for the external missionary arm of our Holy Archdiocese in Adelaide and Parishes to fundraise and assist with these causes, but for us here in SA, perhaps what has been most noteworthy, are his efforts in healing the schism which has marred our community for over 60 years. His humble and down to earth nature facilitated the reception of 4 clergy into the fold of the Greek Orthodox Archdiocese, who sought forgiveness and return,” continued Father Michael.

The Holy Synod of the Ecumenical Patriarchate also elected Bishop Apollonias Seraphim as Metropolitan of Sevastia.

Archbishop Makarios, congratulated and thanked the two hierarchs for the contribution they made whilst serving in Australia noting that their promotion was worthy and justified.

“I am delighted with this development and I want both our hierarchs to know that Australia was and will continue to be their home,” said Archbishop Makarios.

The new Metropolitans thanked the Archbishop for the love with which he has surrounded them from the first moment of his investiture and promised that they will continue to contribute in every way to the progress and unity of the Archdiocese.

“Like so many South Australians, I extend my heartfelt thanks for all your many years of service – to our local Orthodox community in particular,” said MLC Connie Bonaros.

“Bishop Nikandros was a man of few words with a great sense of humour and will be missed by all,” she concluded.