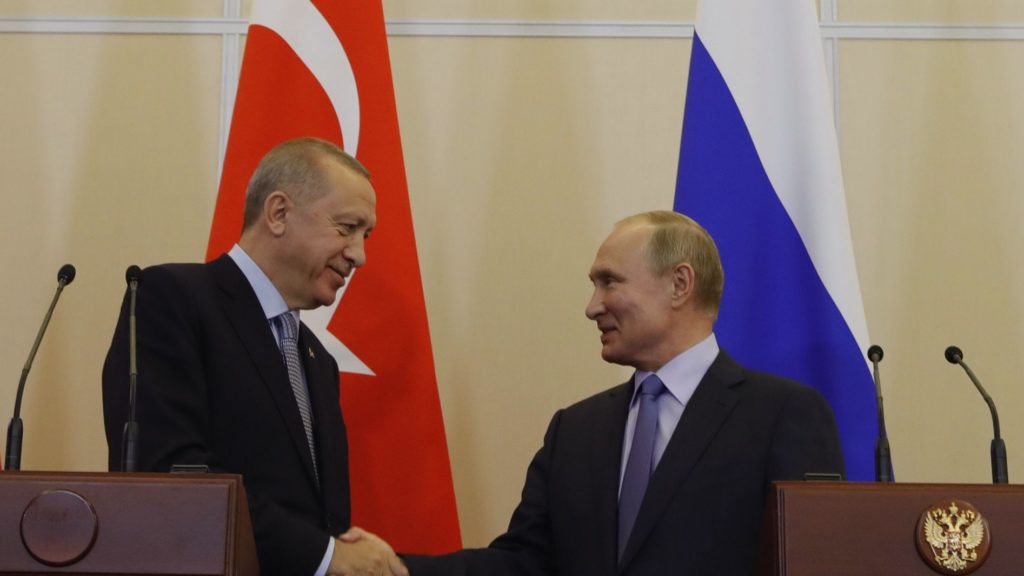 Russian President Vladimir Putin, right, and Turkish President Recep Tayyip Erdogan shake hands after a joint news conference after their talks in the Bocharov Ruchei residence in the Black Sea resort of Sochi, Russia, on 22 October. Erdogan says Turkey and Russia have reached a deal in which Syrian Kurdish fighters will move 30 kilometers (18 miles) away from a border area in northeast Syria within 150 hours. Photo: Turkish Presidential Press Service/Pool Photo via AP

As NATO struggles to deal with the fallout from Turkey’s military offensive in northeastern Syria, the crisis could be another nail in the alliance’s coffin.

Since the end of the Cold War, it has been argued that the future of the North Atlantic Treaty Organisation, or NATO, will be determined by its ability to act outside of its traditional sphere of influence in Europe. When this has been tested so far in the 21st century – in Afghanistan and Libya – the Western alliance was not as successful at bringing peace and stability as it was in the Balkans.

NATO doesn’t have much leverage in the current Syria crisis – something Turkey’s president Recep Tayyip Erdogan appears well aware of. From the start of the incursion, he has made it clear he won’t stop the military operation unless Kurdish forces move to the edge of a 30km safe zone along the Syrian border.

On 11 October, two days after Turkish troops started attacking Kurdish-led forces in northeastern Syria, NATO secretary-general Jens Stoltenberg met with Turkish officials, including Erdogan, in Istanbul. During the meeting, Stoltenberg stopped short of telling Turkey to halt its military action, instead urging it to act “with restraint”. He added that: “Turkey is a great power in this great region” and that “with great power comes great responsibility.”

Stoltenberg also welcomed the temporary ceasefire agreed by the US and Turkey on 17 October in northeastern Syria, saying it could provide a good base for de-escalating the situation.

The US secretary of defence, Mark Esper, is due at a meeting of NATO defence ministers in Brussels on October 24. Esper said he would call on the allies to take “collective and individual actions” against Turkey if it decided to continue its offensive after the end of the temporary ceasefire.

It’s likely some European countries will push for a full ceasefire. Meanwhile the German defence minister, Annegret Kramp-Karrenbauer, said she would discuss a proposal to establish an internationally patrolled security zone along the Syria-Turkey border, in cooperation with Turkey and Russia.

Turkey was granted membership of NATO in 1952 alongside Greece, but it has never been an easy alliance. The question for NATO now is whether the political and strategic cost of keeping Turkey inside the alliance is worthwhile.

Recent Turkish moves have raised concerns among NATO members. Turkey has angered NATO allies by developing closer military ties with Russia, particular with its purchase of S-400 missiles from Russia earlier in 2019. European countries have also accused Ankara of doing little to help fight Islamic State (IS) and of not acting as a sufficient block to IS members who passed through Turkey on their way to Europe. Tensions also continue in a dispute between Greece and Turkey in the Aegan sea.

But Turkey has the second-largest military in the alliance behind the US. Its strategic importance – sitting as it does at a crossroads between Europe, Central Asia and the Middle East – is undeniable. It also hosts more than 3m Syrian refugees, who Erdoğan hasn’t hesitated to use as bargaining chips.

Western NATO allies also rely on the Incirlik base, located 110km from Turkey’s border with Syria. Home to a stockpile of US nuclear weapons, the base has traditionally been used as a NATO access point to the Middle East.

With the West already alarmed at the growing power of Moscow in the Middle East, any decision by NATO to punish Turkey for its incursion in Syria could risk Ankara moving further into Russia’s orbit.

Russia quickly took advantage of the decision by the US president, Donald Trump, decision to withdraw US troops from Syria and moved to entrench its position in the region. The Kurds, who felt betrayed by the American withdrawal, had little alternative but to make a deal with Syria’s president, Bashar Al-Asaad, for their protection.

After the deal, Russian-backed Syrian government forces headed deep towards Manbij in northeastern Syria and other territories recently held by US-backed Kurdish forces. This will empower Russia to play an even more pivotal role in the crisis as a broker between the Kurds and the Assad regime, as well as between Turkey and the Kurds.

NATO will have little leverage to act in northern Syria without US backing – and Trump has clearly given up on playing a role in the conflict. This fits with his general disdain for NATO partners not pulling their weight, and his persistent lament that the US carries the brunt of the burden of NATO. Trump and Esper reiterated that the US would not go to war against Turkey over its military operation in Syria, and Trump took to Twitter to call European NATO members to take responsibility for foreign IS fighters in the region.

The Turkish offensive is changing the alliances in the Middle East. It’s also possible that Russia and the US will find themselves aligned against attempts from other European countries to take a harder line against Turkey. This was clear when Russia and the US vetoed a UN Security Council statement on 11 October by five European NATO members – Britain, Germany, France, Poland and Belgium – condemning the Turkish operation in Syria.

Still, the chance of Turkey’s eviction from the NATO is very slim. There is no mechanism in the treaty to end Turkey’s membership. And fundamentally, it’s in NATO interests to keep Turkey within the membership.

But the crisis has consolidated the rift among NATO allies over Syria. It’s become clear that Europeans don’t share the same threat perception nor the same idea about the policy to deal with those threats as their American allies. It will be this inability to develop collective policy, especially if US backing continues to wane, that will help define NATO’s future.