Nicking the style of David Sedaris

Ever wondered what it’s like to hang around after the show for a David Sedaris book signing? Here is the account of Niki Koulouris after meeting the world-renowned author in which she palmed off her own book and barely let him get a word in about Greek Hospitality Disorder 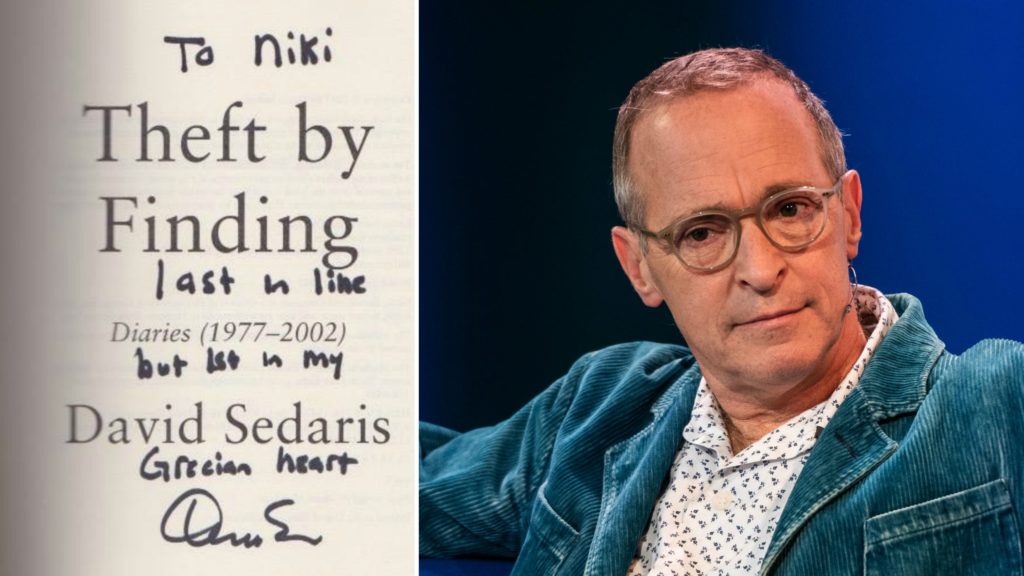 I hand David Sedaris his book. It has a yellow post-it note poking out with my name on it for the author to copy. My new friend Roger and I are in the queue, or line as it’s known in Toronto. It’s past midnight. The last few yawning staff members have changed out of their uniforms.

“I saw you in Melbourne,” I tell David Sedaris.

He smiles at me. “I’m from Melbourne. I live in Toronto now.”

I think he smiles again but he may still be on the first smile. He tells me he is going to Melbourne again. I make a mental note but I am more interested in slipping him my own book.

I put the slim tome on the table.

“Yes”, I reply, knowing full well he is referring to my name.

“It’s for you,” I say. I don’t mention that it’s a poetry book, as if this is a fact that can be easily hidden from him.

“It’s a vehicle for the joke dedication I wrote inside”, I say. “I wrote it before I knew your family didn’t like people trying to be funny, which you happened to mention tonight.”

“You’re not in it,” I say. “Maybe the next one,” in a hopeful tone (as if Sedaris gives a shit). Though I think he looks like he might. He’s been sitting there long enough. And I saw him eating noodles at about 6 pm. Four hours ago, when I also I duly noted his publisher is called Little, Brown and Company.

Sedaris is no slouch in finding his way to my bio. “You like beer,” he says.

READ MORE: Book launch for ‘Lemnos and Gallipoli Revealed’, a book that should be on the school reading list

I’m surprised Sedaris has heard of the more obscure and now defunct magazines in which I’ve been published, as he rattles off two of the three on the list.

“I look forward to reading your book,” I tell him, as he dedicates. He slides his book back to me. “I should have bought the audiobook instead, um, as well,” I say.

“Audiobooks are handy because I can also do things while listening, like picking up trash – like you do.”

I hope for brownie points for alluding to Sedaris’ civic mindedness – he picks up English roadside garbage with a pointy stick – but I don’t wait for them.

“What was that affliction you coined, to do with generosity… that you mentioned in your reading tonight?”

Sedaris searches for the word Roger and I had spent the last six hours seeking, while draping ourselves around various chain-bookshop chairs, as if this were a perfectly normal thing to do.

Sedaris is himself stumped. “Generosity, generosity…” he repeats trying to summon the name of his own disease.

It’s like we three have inadvertently formed a second Bermuda Triangle and the word has fallen in.

“Generosity Disorder,” he says. “Ah that’s it!” Roger and I exclaim, almost in unison. It’s a relief to hear the official terminology from Dr Sedaris after an evening of coming up with inadequate approximations like Generosity Illness and Generosity Ailment.

Roger is asked how we know each other. “We just met,” he lies. I give Roger a startled look.

“Second date,” he qualifies. I give him an even more startled look but refrain from saying loudly that I had no idea that this was a date, and how dare he, in front of Pastor Sedaris.

Roger confesses to Father Sedaris that, he himself has self-diagnosed his very own Generosity Disorder and proceeds to tell (now Pope) Sedaris that when Roger confessed his GD to me, he noted me mentally noting it!

While Rodge and Dave chat, I examine my current misguided ‘GD’ outbreak in which I feel I have a duty to make a world-renowned humourist laugh.

I ask Kyrios Sedaris if he thinks Generosity Disorder is a branch of Greek Hospitality Disorder passed on to him by his Greek father. Primarily, so he can get a word in.

David Sedaris takes the slim opportunity to speak. He tells us he has GD so bad he could go and adopt child after child – like Madonna, Angelina Jolie. I pipe in with, “Josephine Baker did it first!”

I sound like a smart-arsed kid in the front row on the first day of the school year hoping to catapult myself into a gifted students’ program. At least I don’t wave a stiff hand in the air.

“Did you know that?” I add, for good measure.

Teacher Sedaris looks like he may answer in the affirmative. I add, “You know who she is right?”

I stand perfectly still. I’ve just asked this question to an American man who is the best part of a decade my senior and who is dressed like he scores the best table at his local speakeasy any given night of the week.

Sedaris asks Roger about his T-shirt design. On Roger’s copy of the book, author Sedaris draws a picture of a rude-looking finger on the title page and writes something unintelligible about Korea. He signs it with what Roger thinks looks like Oreo S. The S is kind of like a loose capital Greek Sigma or a desert Cobra being charmed out of a wicker basket. Roger later tells me he’s contemplating taking his dedication to a pharmacist for decoding. I skim over what I got: For niki, last in line though first in my Grecian heart, David S.

He wrote this despite the fact that I wrote Dear David S, Ta think I coulda been your beard Niki K. But the man who was once a department store elf hasn’t read this yet. Roger and I quickly leave before he does.

When I get home, I read parts of my poetry book again as Poetry Critic Sedaris. He’s impressed here, appalled there. Mostly he yawns.

Maybe Dave could not put it down. Maybe the cover stood out among the small pile of gifts from the author’s GD-struck fans. I try to read a poem aloud to myself in a Greco-North Carolinian-Australian drawl. My book becomes as funny as hell. Though I thought it had light and shade before, it becomes funny as all hell.

AN EVENING WITH DAVID SEDARIS