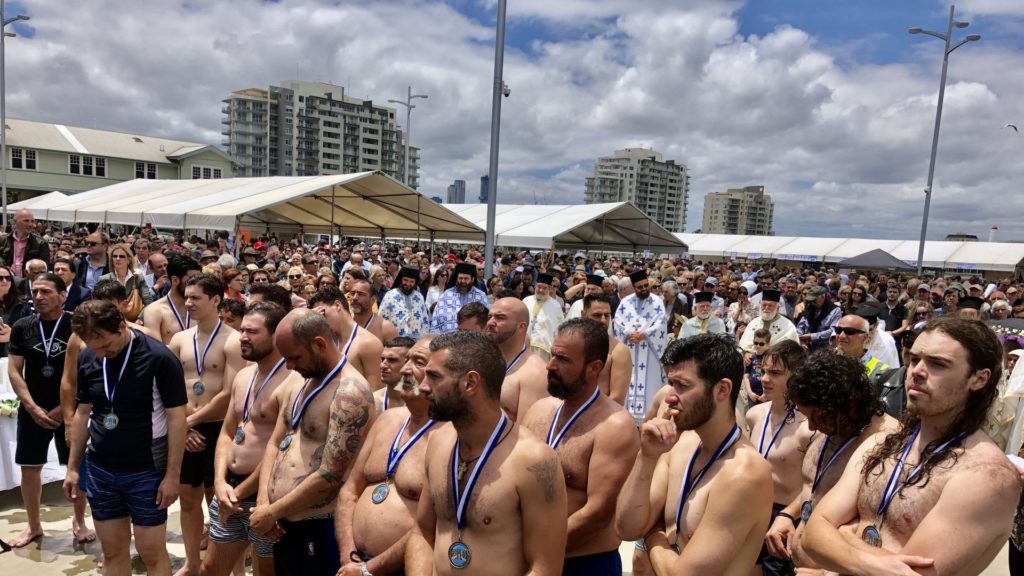 Thousands of Greek Australians gathered at regions around the country to celebrate Theofania (Epiphany Day) with ‘blessing of the water’ ceremonies in Melbourne, Sydney, Adelaide and Perth.

In Melbourne, there were a number of services with the central one being at Port Melbourne. There were 25 registered swimmers who dived from a boat 100 metres away from the port, and following a dash for the cross, 20-year-old Eustratios Manios, a recent arrival to Melbourne from Perth, was the lucky diver who successfully emerged from the waters as the winner.

Manios later accepted a gold cross necklace from Bishop Ezekiel of of Dervis in front of the large crowd, however there was confusion in the crowd as they had seen someone else catch the cross first before throwing it back in the water.

Bishop Ezekiel expressed his disappointment to The Age following confusion he said an interloper Mikes Legkos, 33, of Oakleigh reached the cross before the registered divers and held the cross before they had a chance to reach it. “There are always people who are without order and respect,” Bishop Ezekiel said. We can’t do anything. But (I’d say) next time, to be careful and to obey the order, for it is very important and makes us distinguished from the animals.”

He said he was upset that the interloper came from the side.

Mr Legkos said that he was the legitimate winner and explained that he dived from the pier – which he claims was a longer distance to the cross than from the boat – because he was unable to make it into the official list which is limited to just 25 people who are allowed on the boat for safety reasons. They are accepted on a first come first served basis.

“Another gentleman said we were allowed to go from the pier which was further away,” Legkos said on the Neos Kosmos Facebook page to explain why he and three other guys dived for the cross. “I caught the cross. The two life guards yelled out to throw the cross back. I got upset but I thought I got the cross first! I guess I know I got the cross first. I have the blessing, so I threw it at the other guy.”

On his part, Mr Manios agreed that organisers should let all prospective entrants have a chance to swim and added that it was a great “honour” for him to take part.