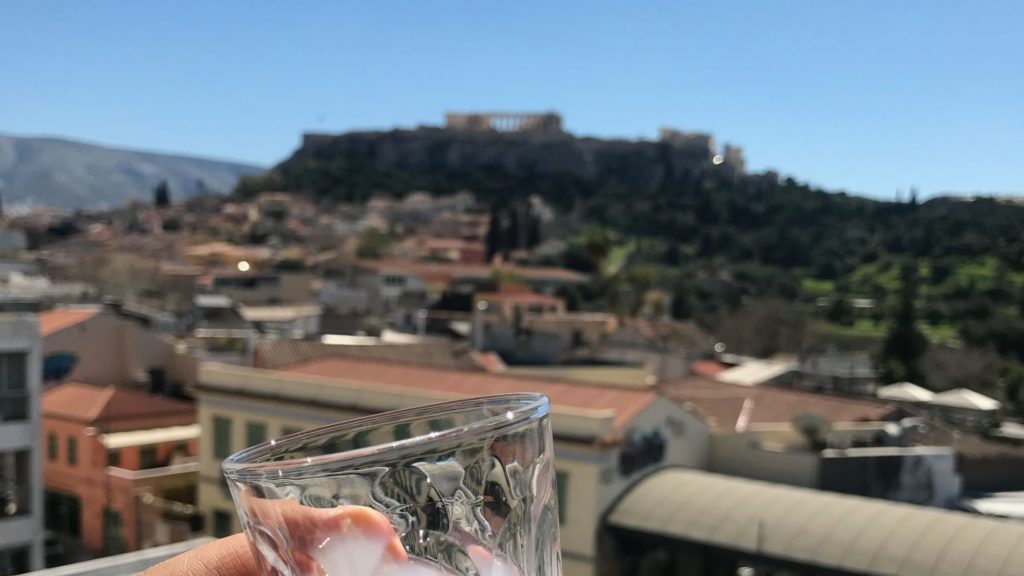 A farewell drink as Fotis finds himself in a city that is shutting down. Photos: Supplied

Athens, Wednesday, 11 March: I was leading my annual arts and cultural tour of Athens, from 9-13 March. Artists and producers from outside Greece come to Athens for five days and my partners and I get them to meet peers and visit museums, concert, theatres and cultural centres.  The program began to fall apart after the third day. What was a concern on day one became reality mid-week.

Our meetings, performances and museum tours ended abruptly. This is a city which does not know what audience development is. Over 1500 new theatre performances and concerts per annum are packed. Art, music, theatre are not an option for Athenians they are as indispensible as food and water.

The members of my group began to change flights, two Americans just made it to the last Etihad flight before the United States closed its borders.

Athens, Thursday, March 12: This day was unnaturally quiet. Athens’ chorus is the human voice – the city is a constant murmur but today it was quiet. Standing on my balcony I saw a bright green parrot flying over, screeching. I cannot remember seeing a parrot flying free in Greece before. I spent most of the day in the apartment gifted for a stay by a friend. An apartment, which has a wall completely glazed with a direct eye-level view of the Parthenon. The sun began to set, burned orange and sharp pink, behind the Parthenon. A few shots of raki later and a large enough joint I put on Dark Side of the Moon by Pink Floyd. I think it was the first times in over 35 years that I fully understood what the album means. At least to me.

Athens, Friday, March 13. At 10:30am Plaka was almost uninhabited. Nervous shopkeepers and restaurant owners hauled open their shutters, a Nordic school group and a few old people scattered around. The cafes, which should have been crammed with people sipping bre

By 2pm the tavernas in Psyri – Athens’ hipster centre were sparse, instead of crammed with people sitting shoulder-to-shoulder ordering lunch. The few of us that ate out did so quietly. We cleaned our utensils with antiseptic; we tried not to look at each other. No one has ever been scared of the ‘gaze’ here; this is not Australia. It is normal to gaze, to flirt, and intervene in strangers’ conversations. Athens by 3pm was quieter and emptier, and that is is not what Athens has ever been. People were seeking refuge in their apartments.

I sat sipping tsipouro (grappa) on the balcony, staring at the sunlight that sparkled off the bleached ruins off the Parthenon. It warmed my bones. The spring air was warm, crisp and clean. On our balconies, we all breathed in the air but it was an air of terror that we stoically tried to not express fear.

At night it was still quiet. The music had been silenced. The musicians in the streets, the innumerable taverns and venues, music from the bars and clubs expired.

The lust for life, that hit and rush that Athens is, has evaporated.

No kissing, handshaking, touching, or hugging, this is never happened in my lifetime.

Athens, Saturday 14 March: By 10am I had packed my bags, but I do not want to leave. I loathe the fear that had infected me. Not fear of Covid-19 but a fear of not seeing my family, of being stuck and likewise, of leaving the city I love. I’ve had an affair with Athens since I was young. I’ve tried to live here many times, but it never wanted me with the same desire.

Athens’ was from now until 24 March totally shut down. No cafes, no shops, nothing, only but for pharmacies, kiosks and supermarkets.

READ MORE: The Greek family supporting their community during the coronavirus crisis The sun sparkles off the Acropolis as it sets. The empty streets of Psyri at 2pm on 12 March, a surreal experience. A final lunch before bidding farewell to Athens.

“This is a war with an invisible enemy,” said the taxi driver taking me to the airport just after squeezing some gel in his hands.
“I’m not sacred of the virus, I am scared of poverty, you are my only customer since yesterday.”

Athens was getting ready for the 35 million tourists descending on Greece from April onwards. They would stay a few days for the culture and food, then go to the many islands and the coast for summer.

Athens had been edging out of financial crisis with the arts and culture leading the revitalisation. A fulcrum of new art and new performance in a post crisis period. Now it was all silenced.

crisp air. The Acropolis will provide an emotional sanctuary for Athenians, those four million living in a city that spreads out like wedding dress below.

During the past 2,500 years, earthquakes, fire, exploding gunpowder, looting and defacement, have rocked the Parthenon, the apotheosis of Greek architecture. The ancient Athenians built it in only eight years. Not much later, they died from the plague along with their leader Pericles, all huddling behind the Acropolis’ walls – as the Spartans burned Attica’s farms and fields. Melbourne, Sunday 15 March: Isolation for 14 days, away from my wife and son. Sharing a house with a friend. We are all now huddled behind our walls.

The hubris, the self-assuredness, the superiority of culture and ideas, our overwhelming sense of personal injustice, and justice, our sacred feelings – just like those of the superior ancient Athenians, are now meaningless as they were for them. Feelings, culture, values are no match for a very democratic virus.

That emerald parrot screeching and joyfully skimming though the Athenian air may know something we do not.