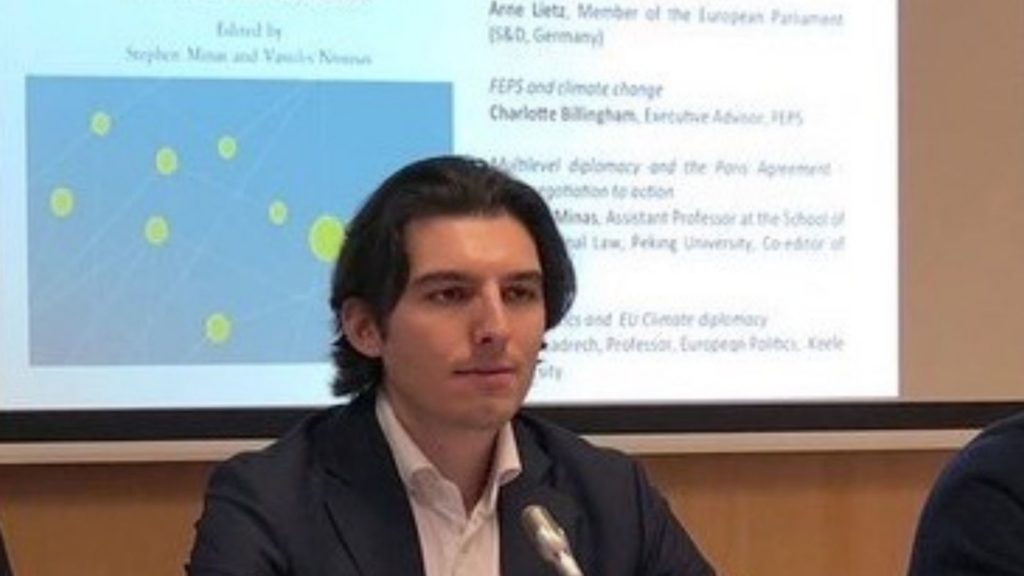 Mr Minas worked in his mid-twenties as an adviser to the former Premier of Victoria, Ted Baillieu; following that he did something light, a PhD in Law from King’s College in the UK. If that wasn’t enough, he secured a post as Assistant Professor of Law at Peking University School of Transnational Law, where he still teaches. Now he has been elected as the Vice Chair of Technology Executive Committee of UN Climate Change and all this by his thirties.

When asked about the nexus between passion and discipline Mr Minas said, “The role played by chance is always considerable” and points to a “team effort”.

“Even with the PhD, where the actual writing is a solitary process, you benefit hugely from exchanges with supervisors, mentors, colleagues and indeed students,” he told Neos Kosmos.

As Vice Chair of Technology Executive Committee of UN Climate Change, Mr Minas has a challenging task ahead of him. The partisan world of climate change and UN politics cannot be ignored.

“At this difficult time, it is vital that global cooperation on climate change continues, and the Technology Executive Committee will be playing its role in helping to implement the Paris Agreement,” Mr Minas said.

“We will be providing recommendations to the Conference of Parties – the parties to the UN Climate Convention and Paris Agreement – continuing our collaboration with climate finance providers and producing publicly available policy papers on a range of topics, such as technologies for coastal zones,” Mr Minas said judiciously.

The UN has been attacked by the US, Great Britain, Israel and Australia for bureaucratisation, slow to action, and for allowing what some states see as the hijacking of the UN Human Rights Council by anti-Israeli states who are themselves responsible for significant human rights violations like Pakistan, Libya and Czechia. Mr Minas and his peers will need to engage with the US, Great Britain and other democracies that are increasingly feeling alienated by the UN.

“I believe we do need to work with and through the UN. As former US representative to the General Assembly Philip Jessup once said, ‘every improvement in the United Nations improves the quality of the life of nations.’

“Members of the Technology Executive Committee serve in their personal capacity and are elected in a balanced way from developing and developed countries,” Mr Minas said.

He adds that the committee he serves is made up of a “very collegial group which works on the basis of consensus decision-making, with able professional support from the UN Climate Change Secretariat.”

“There are still pathways to limit global warming to 1.5°C above pre-industrial levels and avoid the worst scenarios, according to the Intergovernmental Panel on Climate Change.

“They require a major step-up of policy ambition and practical implementation, for which technology is key – for example, the recent major advances in renewable storage.”

Mr Minas wants the “aggressive deployment of current technologies” to avert the worst of climate change.

“The Technology Executive Committee is this year producing a paper to identify innovative approaches to stimulate uptake of existing technologies,” he said.

Mr Minas’ parents migrated from northern Greece to Australia and he has lived in Great Britain, Hong Kong and now China and like many migrants he believes he is a “product of multiple homes.”

“Australia rightly celebrates multiculturalism as our great strength. Greece has looked to the contributions of the diaspora from the Revolution of 1821 to recent times, when some famous (or perhaps infamous) dual citizens have played prominent roles in our history,” he said.

“And the EU, our common European home, is itself an orchestra of diversity.

“I think ‘home’ is about acknowledging the places and experiences we come from and as the old song reminds us, ‘κι όποιος δεν καταλαβαίνει δεν ξέρει που πατά και που πηγαίνει’.”

Delighted to launch our new podcast Legal Frontiers: research-based analysis of the intersection of law & transnational challenges. In this episode @MFeldman_ & I discuss the pandemic & #arbitration + dispute resolution amid decoupling, connectivity & #BRI https://t.co/4NmlONjbk0