The cost of staying silent on Hagia Sophia 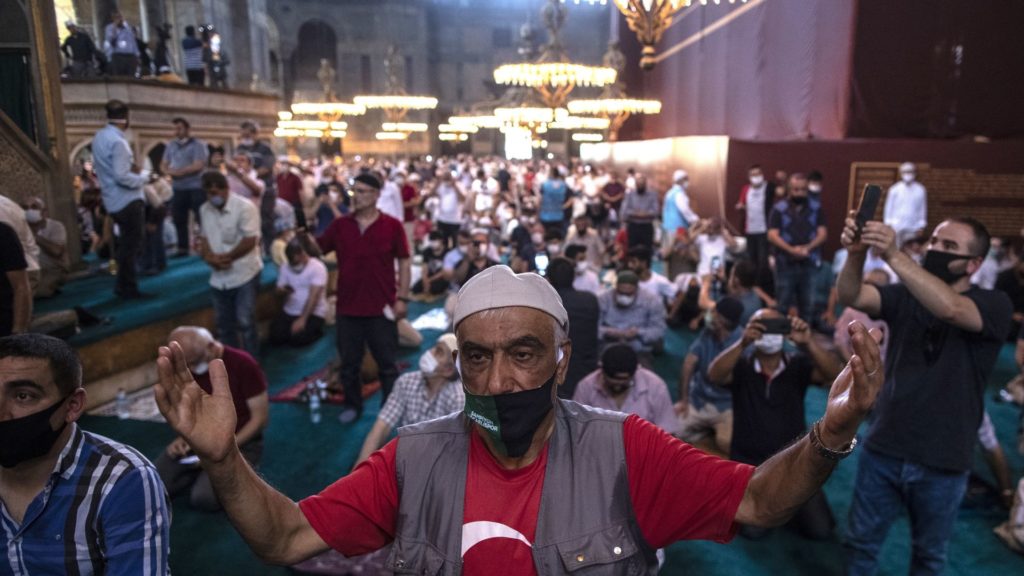 A man prays before the noon prayer at the Hagia Sophia Mosque in Istanbul. Photo: AAP via EPA

The date 24 July 2020 will go down in modern Turkish history as the day Turkey buried its founder Kemal Ataturk’s secular legacy.

For Christians, the day will hitherto represent the day that the magnificent church of Hagia Sophia was converted from a museum into a mosque.

Flags were at half-mast and church bells rang in Greece and in many places around the world in sorrow and in mourning. In Australia, letters have been sent to Prime Minister Scott Morrison from community and religious leaders asking our government to express strong opposition.

Turkish President Recep Tayyip Erdogan’s justification that the building belonged to Muslims because they were the conquerors in 1453 grates against all our sensitivities.

It is true that conquerors own that which they conquer by the force of the power of occupation. But conquerors never really own the creations of the civilisations that came before them. It’s the message of indigenous Australians and Americans and displaced peoples around the World. It is only when Nations recognise and preserve the intrinsic value of previous civilisations that they themselves become truly civilised.
But while Hagia Sophia stood and stands, nothing can erase its fundamental Christian soul as a construction of Christian civilisation.

The reactions to Erdogan’s actions from Christian leaders at the highest levels have been intense. Russian Patriarch Kirill and Pope Francis expressed their “pain”. Greek Orthodox Patriarch Bartholomew noted that it “risked turning Christians against Muslims”.

Despite all of the international and local community outrage the Australian Media and the Australian Government has largely accepted Turkey’s actions. An Australian Foreign Affairs statement said: “Hagia Sophia is a unique and historic symbol for Turkey and the surrounding region, which holds religious and cultural significance for many religious communities” “Australia would like to see Hagia Sophia remain open to all.”

This line more or less mirrors the official lines of the US and Russia.

US State Department Spokesperson, Morgan Ortagus said: “We are disappointed by the decision by the government of Turkey… [But] We understand the Turkish Government remains committed to maintaining access to the Hagia Sophia for all visitors”

Russian President Vladimir Putin’s response through spokesman Dmitry Peskov was: “The decision to change the status of St. Sophia Cathedral in Istanbul is Turkey’s own internal affair.

“It’s our hope that the status of Sophia as a World’s Heritage Site will be taken into consideration by our colleagues,”

These responses miss the point. Many mosques around the world are open to the public but they are not converted cathedrals of such important historical, cultural and religious importance to Christians around the world.

The importance of Hagia Sophia is that the building, represents the beginning of Christendom, completed in 537AD it remained the World’s largest Church for a thousand years. It was constructed by the Byzantine Christian Roman Emperor, Justinian I under the brilliant architectural and engineering prowess of Orthodox Greek and Italian Christians. Once conquered in 1453 it was converted into a mosque and surrounded by four minarets as if to emphasise that Christianity itself was surrounded.

The decision by Ataturk 86 years ago to transform it into a museum allowed much of the original Christian artwork to be uncovered and restored. This was an emphatic statement of Turkey’s new secularism and its desire to see the coming together of faiths.

For its reconversion to a mosque, Mr Erdogan ordered the floor of Hagia Sophia which is made of off-white marble slabs separated by strips of green marble to organise worshippers to be covered by a 2000 square meter turquoise wool carpet.
Exquisite mosaics depicting the Virgin Mary and infant Jesus in the main dome and other icons were draped over. The site of what was happening brought tears to many other Christian’s eyes.

Many Turkish academics and commentators from around the World, have bravely opposed the action noting the dire long term consequences for Turkey. Nobel Prize-winning novelist Orhan Pamuk has stated: “There are millions of secular Turks like me who are crying against this but their voices are not heard.”

What is at stake here is not the future of Hagia Sophia but the future of Turkey. Many Turks may start to feel uncomfortable about praying in a church built by a Christian civilisation. Others will lament the loss of the secular democratic road and the systematic erosion of press and judicial freedom in the name of Islam. In Erdogan’s Turkey thousands of “political prisoners” are languishing in jails including 93 journalists held without trial. Judges have been replaced and 150,000 public servants purged. The conversion of Hagia Sophia is in many ways a conversion of Turkey itself.

Melbourne is home to large Italian, Greek and Turkish communities that are freedom loving and understanding of each other’s religious and cultural differences. Our own politicians would do well to take a principled stance in support of Hagia Sophia remaining a museum. Many enlightened Turks in our community would also be assisted by such action in their desire to see Turkey as a secular, democratic nation.
Australia has taken the lead in standing up to Xi Jing Ping on his authoritarian, expansionist and anti-Muslim Uighur decisions. Why is Erdogan immune?

Theo Theophanous is a Commentator and Former Government Minister in Victoria, Australia