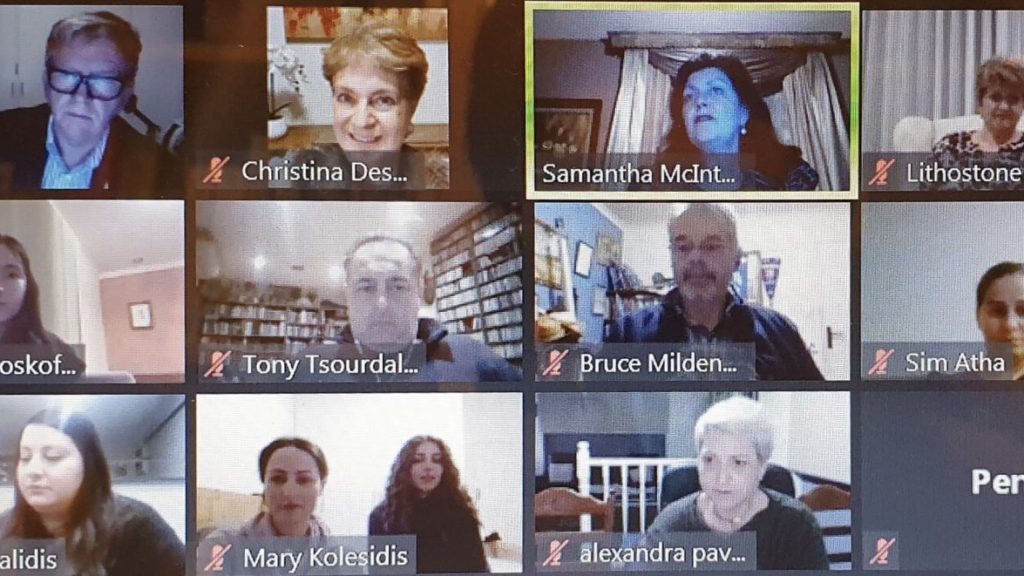 Screen shot with some of the over 60 participants taking part in the George Devine Treloar Memorial Commemorative Service on 8th September. Photo Christina Despoteris, 2020.

All of us who organise or take part in public events or celebrations have had to face the challenge of how to maintain involvement in the current circumstances. Those of us in metropolitan Melbourne – currently in Stage 4 Lockdown – have been unable to take part in these for more than a few weeks. So that’s where the George Treloar Memorial Committee decided to get creative.

It is one year since the unveiling of their impressive new memorial statue in the Ballarat’s “Avenue of Statues”, lovely tree-filled Sturt Street. Designed by Australian sculptor Lis Johnson, the memorial comprises two bronze sculptures – one representing George Treloar and the other a little girl representing the 108,000 Christian refugees from Asia Minor that George helped re-settle in northern Greece in the early 1920’s. These stand atop a stone plinth, with bronze commemorative plaques and surrounded by beautiful beds of Treloar Roses. The memorial was the work of the Committee and the City of Ballarat, supported by many of our local Hellenic community organisations as well as many individuals. Nearly one hundred people attended the unveiling event, with Pontian dancers and music to add to the solemnity of the event.

Facing the cancellation of this years planned annual commemorative service at the Memorial, the Committee decided to create a service and form of participation for the current situation. Many supporters had contacted the Committee expressing the desire to participate in a service in some form to mark their personal respect for George and the refugees.

And so the Committee set about organising a public event via the Zoom platform, incorporating a symbolic wreath-laying at the memorial in Ballarat, speakers and the showing of an excerpt of the Committee’s new video documentary. It was my honour to act as host for the on-line service.

The event was held as scheduled on the evening of 8th September, with over sixty participants drawn from across Australia and indeed the world. A number of participants took part from Greece, an opportunity they would not have had without the use of the internet. Participants representing many of our local Hellenic community organisations took part, including those representing Crete, Pontus, Imbros, Tenedos and Lemnos to name only a few. The Committee was particularly honoured to have descendants of George Treloar join in from inter-state – David Treloar and Eleanor Lacey – as well as the creator of the sculpture, Ms Lis Johnson. Mr Lee Tarlamis OAM MP, former MP Bruce Mildenhall, Ms Arlene Bennett President of the Australian Nurses Memorial Centre and Mr Ange Kenos President of the Essendon RSL also took part in the event.

Participants were able to watch a video of Cr Samantha McIntosh, the former Mayor of Ballarat, laid a specially created wreath at the memorial in Ballarat earlier in the day, assisted by Mr Angelo Christofi representing the Ballarat Greek community. The wreath comprised three elements – the hazelnut tree (representing the Pontian region of Asia Minor), the olive tree (for Greece symbolising Peace) and our own Australian wattle (representing re-birth and the future). Cr McIntosh has been a strong supporter of the memorial and had officiated at the unveiling of the memorial in 2019.

Ms Athanasiadis introduced the new documentary video that has been produced by filmmaker John Irwin on behalf of the Committee. The documentary tells both the story of George Devine Treloar as well as the creation of the new memorial. Event participants enjoyed watching the short 3-minute excerpt of the documentary that was shown during the event. The full documentary will be launched soon, with discussions well advanced for its showing on Greek television and its release on DVD. Watch this space.

The meeting included addresses by Ms Penny Tsombanopoulos on behalf of Merimna Pontion Kyrion of Oceania, as well as by both Ms Litsa Athanasiadis and Ms Christina Despoteris on behalf of the Committee. Major memorial funding contributors were all publicly acknowledged as part of the service.

Ms Athanasiadis was overwhelmed by the success of the event – the first such online event organised by the Committee – and thanked everyone who helped organise it and all those who took the time to participate in it.

“We felt we had to do something to allow people to come together to again recognise this great story which is so much part of both Australian and Greek history. All those who participated had demonstrated their continuing interest and support for building awareness of George and his refugee work, for which many of us are truly grateful,” she said.

Ms Athanasiadis was particularly encouraged by the participation of people from Greece, including from the same village of Thrylorio which had been established by the refugees with the help of George Devine Treloar almost one hundred years ago. One of those was Ms Soumela Savvidou who during the event sent warm congratulations to participants from Thrylorio. The descendants of George Treloar also thanked the Committee for organising the tribute. The Committee hopes that they will be in a position to hold a normal physical commemorative service at the memorial in Ballarat next year in September – COVID19 permitting – but is considering including some form of online participation as part of future services.

The Committee encourages other community groups to consider holding such celebrations or events on-line as way of continuing our tradition of community participation.

Jim Claven is a trained historian, freelance writer and author of the recently published Lemnos & Gallipoli Revealed: A Pictorial History of the Anzacs in the Aegean 1915-16. He is a member of the George Devine Treloar Memorial Committee, as well as Secretary of the Lemnos Gallipoli Commemorative Committee. He can be contacted at jimclaven@yahoo.com.au