‘My George Zangalis’, remembering the man who offered so much to his community 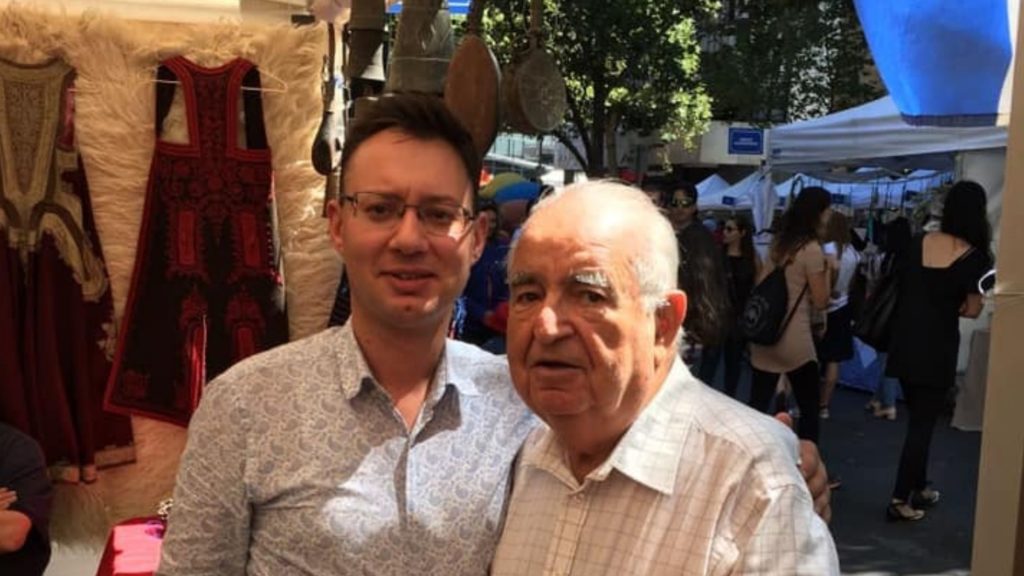 – Ω Κώτσιο, a gravelly voice would resound in my ears. Without turning around, I would invariably know who was calling me, and so I would respond:
– Ω μπάρμπα Γάκη.
– Lavdi shqiptarit të madh Enver Hoxha! (Glory to the great Albanian Enver Hoxha!) he would proclaim.
– Të raftë rrufeja (May thunder strike you), I would guffaw and we would both embrace each other laughing.

Unionist, Communist Party of Australian activist, historian, pensioner advocate, broadcaster and multicultural affairs doyen George Zangalis was from Northern Epirus, in Albania. My family was from southern Epirus and this was a problem because we were aware that the Greeks in Northern Epirus’ rights were being severely proscribed by the communist Albanian regime and that the “great Albanian Enver Hoxha,” who George so idolised, was actually a homicidal paranoid maniac with a penchant for torture and far from being a textbook communist, was actually a nationalist to the extreme.

“The problem is, you are too doctrinaire,” George would comment, when we would discuss the issue.

“No, the problem is that you have chosen a football team with an expiry date,” I would riposte, causing him to shake with laughter, a laughter that I would echo years later, after an epic trip to his homeland, where, in the aftermath of the fall of the regime, he struggled to find any monuments to his hero, since they had all been destroyed.

“Do you still have those books by Enver I gave you?” he asked me, crestfallen upon his return.

“Which ones?” I sought clarification. “‘With Stalin’, or “Eurocommunism is Anti-Communism’?”

“Yes,” I responded. “‘With Stalin’ is published on paper so coarse that it removes layers of skin when one attempts to wipe one’s posterior with it upon evacuation, while ‘Eurocommunism is Anti-Communism’ is so silky that one’s waste just slides right off, without friction.”

Assuring him that I was joking (my posterior is too delicate a disposition to endure the thoughts of Enver), we would then launch into a heated discussion about global poverty, inequality and the labour question, both of us goading each other far beyond the confines of good taste.

“I don’t know how you get away with it,” one of his friends once told me. “George never compromises on his beliefs.”

Nor did he ever. But I was, by virtue of my ancestry, his compatriot, which meant that he could never bring himself to write me off, no matter how recalcitrant the views I purported to profess, actually were. Also, though we may, by virtue of our homeland’s proximity to the gates of Hades (the Acheron River, which was the entrance to the Underworld flows through Epirus), appear to others as humourless and morbid, when in natural habitat and among each other, we are masters of irony and deadpan, regardless of our political opinions.

“You cannot detach yourself from the world,” George would lecture me, fervently, whenever I affected nonchalance or ambivalence. “You live in the polis, you must concern yourself with politics. You must have an opinion about what is going on.”

“I haven’t had an opinion on anything since I was three,” I would affect an Oscar Wildean attitude.

“Maybe that is for the best,” he would smirk. “Some people shouldn’t be allowed to have opinions.”

“Your mob would like that, wouldn’t you,” I would snap back and he would roll his eyes in mock horror.

My favourite moments with George were spent when he was not present. Every Tuesday morning, driving to work, I would religiously tune the radio to 3ZZZ to listen to his radio programme. There were three things that I found enthralling about his broadcast, the first being how he was able to constantly obtain interviews with such high ranking Labor politicians, the second, how he would interrupt them midsentence, question them, contradict them and treat them to a lecture in which he expounded his own views on the topic of the day, and the third, closely related to the second, how he would be able to expound his analysis for over fifteen minutes without ever drawing a breath.

Once, while he was on air and (rare for him) was taking a musical break, I called him.

“Ναι;” he spoke into the phone, assuming that his caller was Greek.

Holding my nose so as to distort my voice, I enquired: “What did Comrade Stalin say to the fifteenth plenum of the Central Committee about punctuation?”

“…err…. um,” George’s voice stuttered at the other end of the phone. “What did he say?”

“He said that omission of punctuation and failure to enunciate distinct thought-phrases is a counter-revolutionary act,” I raised my voice.

There was silence for a while. “I’m not sure that I….” George began to say (meanwhile the music had stopped and there was silence also coming from the airwaves), only to realise exactly what was going on. “Hang on. It’s you isn’t it?”

“Hear, hear,” I switched to English, this being George’s favourite acclamation when a politician in his programme espoused one of his opinions or better still, quoted him.

“Good God, what am I going to do with you?” he sighed.

“Finally changing sides, are we?” I remarked snidely.

Religion was a topic that would exasperate George.

“I can’t understand why an educated person like you, born in Australia, believes all that garbage.”

In turn, I would try to explain to him that to harbour the belief that mankind, by means of its own will and that of Marx could transcend its flawed nature and bring about paradise on earth was an act too optimistic to be undertaken by a true Epirote, the tribe being ultra-pessimistic at the best of times and that my belief system was thus a result of my DNA.

George would have none of it. After misquoting scripture a few times, he would then launch into the narration of a series of stories about salacious and venal priests, causing me to stop him before he arrived at the punchline, for I had heard these all before, having been the person that had originally related them to him in the first place.

“What a loss to the revolution you are,” George would lament.

After years of banter, I relayed to George, through a friend that I had finally seen the light and had become convinced that in Marxism lay the salvation of mankind. George was sceptical at first but somehow, became convinced of the veracity of my revelation. He was overjoyed and we arranged to meet. When he arrived at the preordained rendezvous point, he was greeted by the sight of me guiding the great Christos Tsirkas through Leon Trotsky’s “History of the Revolution.” George, as orthodox a communist as ever one could find, shook his head sadly and walked on.

When we were not trying to provoke each other, we would have deep and lengthy discussions about our place as Greeks in Australian society. I admired his devotion to his beliefs and his unwavering commitment to making the world a better, more equitable place. Through him, I realised that it is imperative for our community to take part in the Australian political process and that as a communal entity, we bring to the party our own unique perspective and narrative that demands to be taken seriously. Most of all, I learnt through him, that any rights or privileges we have earned from the dominant class have been wrested only through activism and the struggle to retain them is a constant one, for the nature of power is centrifugal and it eventually draws all privileges away from its recipients, towards it.

George was also a proponent of true multiculturalism. Not the multiculturalism propagated by governments which boxes ethnic communities in compartments for easy reference and prescribes the manner in which they will define and present themselves on the margins of mainstream culture, but instead, a society where all languages and peoples are afforded equal status and authority. It was this ideology that informed his passionate activism for the teaching of Modern Greek in all state schools. I disagreed vehemently with him, believing that since the State’s agenda was different to our own, our community should be controlling our own Greek language education to suit our own needs, while also professing scepticism as to the viability to the mainstream of his paradigm of ethnolinguistic parity, given how many cultural groups currently call Australia home.

“It doesn’t matter,” George would say. “You should never accept the status quo. Especially considering how inequitable it is. Challenge the mainstream. Unravel the edges. Shift them from their comfort zones. It is the only way.”

That was the guiding philosophy of George’s life. Bold, unafraid and ready to surmount any obstacle, he was formidable and uncompromising whether campaigning for pensioners’ rights, workplace relations or the welfare of ethnic communities. As late as November last year, I was seeking his counsel as to the best way to tackle the imminent closure of the LaTrobe University Greek Programme. And that was one of the most endearing things about George. He was always on hand to give advice, to suggest a course of action or to lend assistance.

The last time I spoke to George was on his ninetieth birthday, earlier this year. During that conversation, I was able to tell him just how pivotal he has been in forming my community consciousness and just how much I loved and respected him. His last words, punctuated with pauses as he struggled for breath, were these: “You must never step away from the fight to make the world a better place. You must fight injustice in all its forms. I remember you telling me your ancestors were from Souli. Well, what did the Souliotes do? They travelled to all parts of Greece and fought to liberate the downtrodden wherever they went. So do that. It’s in your DNA.” I was in tears.

A few days after George died, I was sitting with his daughter Vasso at the Greek Centre, reminiscing and sharing our grief. Vasso began to explain her ideas for some vital community projects involving the institution of Greek story-telling in municipal libraries. As she spoke about deliverables and outcomes, unconsciously the inflection of her voice and her facial expression assumed the tones and form of her father.