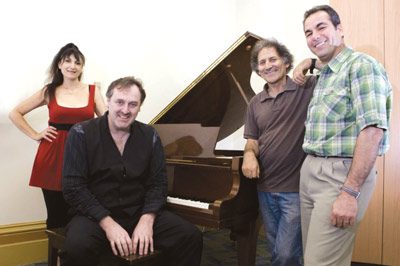 WARREN Ellis, composer and musician, is the creator of music that seeks to bridge divides. He has been living in the UK and Spain since the 1980s and is back in his hometown, Melbourne. Ellis composed for the Royal Shakespeare Company, Woody Allen and lugs a war chest of awards such as the Evening Standard Award for Best Composer.

He is the curator of an impressive line up of Australian artists such as leading classical guitarist Slava Grigoryan, actor Simon Palomares, Kucha Edwards and Klemzer violinist Ernie Gruner all playing for Human…Rights? on February 16 at the St Kilda Town Hall, in support for Melbourne Pen the organisation devoted to the international liberty of writers and artists.

Anthea Sidiropoulos, singer and inspiring enabler also performing on the night, brought the plight of Harry Nicolaides to Ellis’ attention.

Harry the ex Neos Kosmos English Edition (NKEE) staffer is languishing in a Thai prison on the obscure charge of lese majeste, of offending the Thai royal family.

Harry Nicoliades pleaded guilty to the charge of writing a paragraph in his self-published book Vesrimilitude about the Thai prince’s fictional infidelities. Anthea introduced Ellis to Arnold Zable, Australia’s leading chronicler of migration’s tales and the president of Melbourne Pen.

As Ellis said to NKEE, “Anthea was the catalyst for this. I do a lot of music with Arab musicians and Jewish musicians, I do a lot of work in London for troubled kids, I do music which transcends borders and looks at peace, and she said you’ve got to meet Arnold and we met.”

Wills adds with an evident sense of belief, “Arnold and I talked a lot and between talking there was a space where we both knew what needed to be done. Harry Nicolaides’ case is not well known and in order to highlight it, as well as other cases, and in a broader attempt to break divides, we have Simon Palomares reading Garcia Lorca and have Majeed Sokour a fine actor and Iraqi refugee performing, and others, we are trying though this event to highlight the rights of writers and artists, the bigger picture.”

Arnold Zable is also the president of Melbourne Pen and talking to NKEE pointed to the fact, “As far as International Pen is concerned, Harry is the only Australian writer to be jailed overseas for his writing.” Zable has been concerned about his Harry’s case for over six months.

As he says to NKEE, “The benefit is for International Pen. There are many different strands to this; first came Harry Nicolaides and it is a case that Pen became concerned with from the beginning. We always were liaising with Forde, his brother, Anthea had this idea why don’t we do a benefit and within a week we had a fantastic line of artists and musicians.”

Zable adds with gravity, “Nicolaides’ case is about a man who had a great love for Thailand and in his love for it wrote about it. He is reaching out to understand Thailand and what is happening to him is blatantly unjust and unfair.”

Anthea Sidiropoulos the conduit and instigator of the benefit for Pen International said to NKEE, “I saw the photos of Harry in chains and I talked to Warren Wills and said we need to do something about Harry.”

Adding with simple determination, “It is unjust he is not a terrorist, he is not a criminal, what has he done?

He is just a writer it’s a matter of freedom of expression. Whatever he wrote it is a violation of human rights to be put in a Thai prison for what we regard as freedom of speech.