As governments pump the economy to avoid depression it seems that economic rationalism is dead, or is it? Jeana Vithoulkas talks to the experts such as Bill Clinton’s former Secretary of Labour Robert Reich. 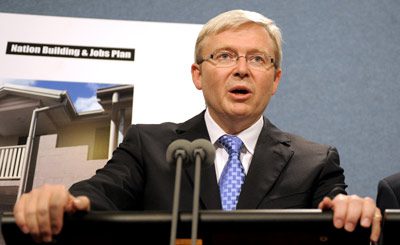 ON FRIDAY, Independent Senator Nick Xenophon sealed the deal for the Rudd to spend $42 billion on pumping up the economy with the aim of preventing the disastrous consequences of a full blown depression.The money is to be spent on building infrastructure in the areas of transport, education and sustainability.

With the stimulus package, the Federal Government is hoping to keep the economy chugging along (albeit slowly) and to keep people in jobs while undertaking ‘nation building’ projects.

Like his social democratic counterparts in other countries, most notably, Barack Obama, Mr Rudd has admitted that the stimulus package will not prevent a recession, but is an attempt to lessen the problem ahead of us.

All over the world, political leaders are nervous and worried about the economic crisis. Predictions that it will range from bad to catastrophic is the advice that they’re getting from economists everywhere and for the first time in thirty years, the prevailing, neo liberal ideology (where the market rules and sorts everything out) is being abandoned. Whether this is temporary or permanent remains to be seen.

It is those politicians in the Anglo American world (US, Britain, Canada and Australia – the countries that embraced the free market ideology without question) who are voting against the government intervening to soften the effects of a recession.

The majority of Republicans in America voted down Obama’s rescue plan, baulking at the idea of spending so much money on public services and infrastructure programs.

In Australia, Liberal leader Malcolm Turnbull has labelled the stimulus package as ‘Whitlamesque’ and said point blank that he wouldn’t support it, despite the business community declaring that they’re in favour of it. As expected, conservative commentator John Roskam from the Institute of Public Affairs and former Federal Treasurer, Peter Costello slammed the package, citing the grave dangers of putting the budget into deficit.

Mr Costello’s opposition is interesting. As Treasurer, he gave away lots of money, bonuses and tax cuts that were not part of any infrastructure building, job creation or environmentally sustainable plan.

It is interesting that conservative politicians are taking this stance when economists of the free market school are now declaring publicly that they were wrong.

Alan Greenspan, former chairman of the US Federal Reserve for twenty years until 2006 and an avowed free marketeer until recently, declared that his ideological viewpoint was flawed.

According to Robert Reich, professor at Berkley University, California, the Republican politicians in the US are simply playing politics.

“Republicans don’t want their fingerprints on the stimulus bill or the next bank bailout because they plan to make the midterm election of 2010 a national referendum on Barack Obama’s handling of the economy. They know that by then the economy will still appear sufficiently weak that they can dub the entire Obama effort a failure — even if the economy would have been far worse without it, even if the economy is beginning to turn around.

“They’ll say ‘he wanted more government spending, and we said no, but we didn’t have the votes. Elect us and we’ll turn the economy around by cutting taxes and getting government out of the private sector’.”

If this sounds familiar, it’s because it is. This is exactly the strategy adopted by Malcolm Turnbull.

But what exactly are the alternatives? Is this stimulus plan a response to a crisis and once the crisis is over, do we revert to business as usual?

In a long essay for the Monthly magazine, Kevin Rudd gives a damning critique of the legacy of free market ideology and argues strongly for governments to regulate, intervene and protect on behalf of their populations.

Many people hold the view that this is what governments are supposed to do. That’s why they’re elected. But even within social democratic parties including the ALP, it has been very fashionable in the last twenty years for many in its ranks to abandon this notion and embrace the privatisation, free market agenda.

Dr Andrew Scott, senior lecturer in politics at RMIT University and author of Politics, Parties and Issues in Australia, admits that Rudd’s essay was a big surprise.

“He makes some fairly strong statements about ’30 years of greed’ since the neo liberal ideology took hold. If you take that to its logical conclusion that includes the governments of Hawke and Keating. He doesn’t mention them specifically, but he’s obviously having a go at them as well as the Liberals.” Dr Scott is also surprised at the speed with which Rudd has responded to the financial crisis.

“This is very different to the way that the Hawke Labor government reacted to the last recession. People may recall that Keating was going around saying ‘this is the recession that we had to have’. It took them quite a while to become proactive.”

So is this a new ALP that has abandoned the church of economic rationalism or is Rudd simply responding to a crisis and then once that’s over, it’s business as usual?

Scott admits he’s not sure. “While it’s true to say that there is a strong social democratic tradition in the ALP, it’s been in the minorirty for a long time. Neo liberalism is far from dead and there are still plenty of adherents inside the ALP and as can be expected, the Liberals.

“But it’s not just his response to the crisis that marks Rudd as different to his predecessors. Before the 2007 election, he declared that he didn’t want to be Prime Minister of a country ‘that didn’t make things any more’ referring to a desire for a strong manufacturing policy if he was elected.

“That’s the first time in living memory that a Labor leader has made a statement like that.”

Robert Reich, who served as Secretary of Labour under Bill Clinton has consistently argued against neo liberal ideology. He believes that governments have a responsibility to intervene in the economy in order to address serious structural problems such as the present economic crisis as well as climate change and the growing inequality between the rich and poor.

Calling himself a structuralist, he asserts that the economy cannot fully recover unless these underlying problems are addressed by sound economic policy that is not just about the government intervening in a time of crisis.

“Without policies that put the nation on the path to higher median incomes, higher productivity, renewable energy and a more accessible and efficient health-care system, we’ll face deeper and more prolonged recessions, followed by ever more anaemic upturns.”

He supports Obama’s stimulus plan, but is hoping that it’s not simply a one-off measure.

Dr Scott believes that there is a mood for change in the industralised world and that expectations are high that these measures should not be temporary.

“Young people are playing a leading role. The riots in Greece, the election of Obama, strong voting preferences for the Greens in Australia are all indications of a desire for lasting meaningful change, not just tinkering around the edges.”

The one thing that everybody agrees on is that this crisis is not going to go away quickly and that it will be more far reaching than anything else in recent history.

Despite that, the Liberals won’t disassociate themselves from the deregulation and fiscal conservative policies that got us into this mess.

It remains to be seen how far Labor is prepared to disassociate themselves from economic conservatism and forge a new identity that genuinely separates them from the Liberals and whether this stimulus package is simply a ‘one off’ thing.

Jeana Vithoulkas is a contributor to NKEE, a published author and works for public relations firm EMC.