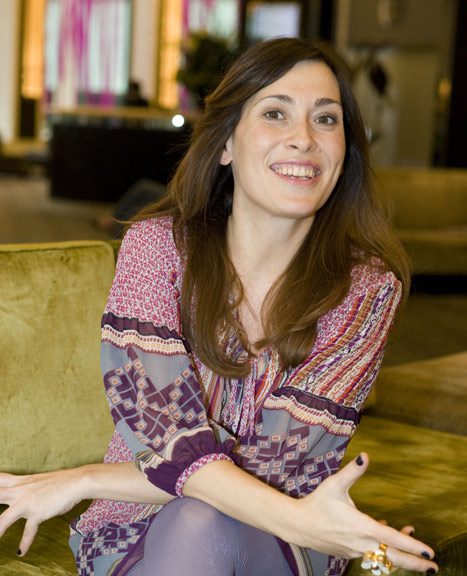 I’m running late! I was meant to be here 20 minutes earlier, to interview Victoria Haralambidou, one of the lead actors in Anna Kokkinos’ latest release Blessed.

I make it, and Haralambidou’s grace is even more pronounced in the absence of mine, while her PR people are giving me daggers. Haralambidou’s mildly sultry Russian accent caresses her flawless English.

Haralambidou was raised in Petersburg and has degrees in cinema and acting, from Moscow, and economics and business administration from Athens.

She has won awards for her cinema work in Pantelis Voulgaris’ internationally acclaimed Brides, while appearing in many of Australia’s television dramas like 101 East West, All Saints, Home and Away.

She has performed in theatre here and in Greece and is constantly sought out. Haralambidou spends half her time in Sydney and the other half working in Greece.

Her intriguing beauty matches a reservoir of knowledge, skill and experience.

“I went to Greece at 15 and once I completed high school, I then left for Moscow where I studied cinema and theatre studies, then back to Greece where I completed an economics degree in Athens.”

I raise the issue of Russian theatre and cinema studies as a foundation for her on-screen intensity, but she is dismissive, “Don’t… you know what? It makes no difference… Studying cinema as an actor is not important, but it is enough.”

“I do not think that studying something can make you good or bad, we like to tick boxes, and when you see that you say, ‘aha that’s why’. But my heritage, my upbringing my sensitivity, it’s all that.”

So it must be Haralambidou drawing on Hellenism for inspiration.

“Define Greekness!” she confronts me.

“The tragedy, the essence of looking at the character, the mother in Blessed – that’s Greek.” I retort.

“Well…” she ponders, openly, ” Maybe… but it’s personal when I develop a character, you can say ‘Aaahhh that’s the Russian in her or the Greekness in her’, but my relationship with God, with motherhood, are purely mine.”

“In my case if there is Greekness it comes from my grandparents, and as my grandfather would say, ‘all Greeks are philosophers.'”

A concession to her personal journey.

In the end, I have to ask the banal question, why Australia? Why so far from home?

Especially being someone already connected to the European film and theatre industry.

In Anna Kokkino’s intense yet poetic narrative on mothers and children, Blessed, Haralambidou provides a powerful and complex portrayal of a widowed mother waiting for her lost son, while attempting not to lose her daughter and trying to work out of the suburban poverty.

She reflects for a moment on Anna Kokkinos’s directorial style, “It is so quiet on the set, maybe everyone is scared shitless, but not intimidated.”

She adds, “Anna is not going to yell, or shout, but when Anna says ‘now I have time with the actor’, everyone disappears from the set.”

Blessed is screening at Nova and Palace Cinemas.