Niki Sperou speaks to ROSS KARAVIS about winning the Odyssey Art Prize for the second time and how her research into post-war migration and the Rudd stumulus package came together in a painting. 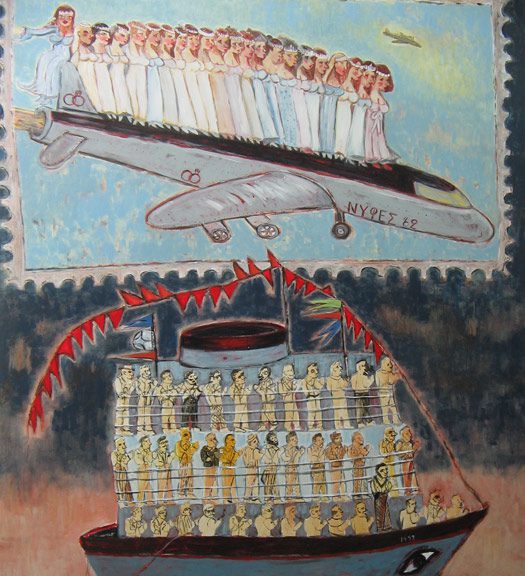 South Australian visual artist Niki Sperou won the ‘Odyssey Art Prize’ for the second year running for her work, ‘The Stimulus Package: a response to a crisis’ two weeks ago.

The prize is an annual prize offered to the best work entered in the Odyssey Art exhibition which is organised as part of the Odyssey Festival in Adelaide.

Niki Sperou is happy to have won and welcomes the recognition of her work.

“It’s always good that people appreciate what you’ve produced and that they have an understanding – because the judges said that apart from the technical aspects of the work they were very much interested in the concept, and I always try and have a strong conceptual base to my work, I find it really encouraging that that side of my work is really understood.”

Her painting ‘The Stimulus Package: a response to a crisis’ is an allegorical work which draws on a range of research she has undertaken on migration to Australia, mail order brides and on Greek shadow puppetry.

It is part of a broader series entitled ‘Karangiozi the Greek migrant.’

The starting point for the painting was her research on post-war Greek migration to Australia.

Sperou found “There was lot in the media in the 60s about single Greek men in the country towns being a problem. There was a lot of loitering, card playing and mischief because they were single. It was like when there were a lot of Amercian sailors here during the Second World War, there was a sense of their being over-sexed and over here.”

So in 1961 the Greek government allowed single women to come to Australia on their own with the idea they would become wives to the many single men that were in Australia.

The painting draws on this subject matter and is painted in a deliberately naive style. It features beautiful washes of colour, very sophisticated visual layering as well as a playfulness in the composition of the work.

Sperou is emphatic that playfulness and humour are important components of her work partly because she is playful by nature and partly because it helps destabilise literal readings of her paintings.

This is born out in the title of the work which draws parallels between the stimulus package that arose of the global financial crisis and the ‘stimulus package’ single Greek males in Australia received in the 1960s with the arrival of a bevy of single Greek women.

So it is no surprise that the judges for the prize – Alison Dunn, CEO Helpmann Academy in Adelaide and South Australian art critics Russell Starke and Jena Woodburn – were generous in their praise of Ms Sperou’s winning entry.

“We thought Niki Sperou’s work showed a lovely gentle humour and a thorough understanding of Hellenic culture in the Australian context. The references to classical antiquity in the rhythmic repetition of the male and female figures sat well with the contemporary subject matter and the work is executed with considerable painterly energy. The work deals with a serious aspect of the Greek diaspora in a way that is both affectionate and insightful but never lapses into sentimentality,” said Alison Dunn on behalf of the three judges.

Having won the Odyssey Art Prize twice, Sperou is undecided on whether she will submit an entry in 2010 but is emphatic in saying “I have been well supported by the Festival and I think in order for it to continue in a strong way, artists should continue to support.”

Sperou will not be resting on her laurels. She is going to be busy over the next 12 months as she is the artist-in-residence at the Prospect Gallery in Prospect, the inner-northern suburb of Adelaide.

Her next major project is a solo exhibition she is preparing for the South Australian Living Artists Festival in August 2010 which will draw on the idea of the golden fleece as a metaphor for ‘what’s your dream.’