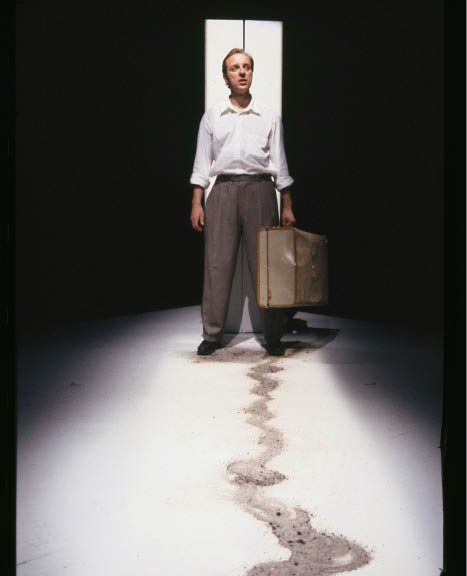 Writer-performer Andreas Lytras is bringing his long-running theatre show Odyssey back to Melbourne for this month’s Antipodes Festival. First performed in 1998, it explores the migrant’s search for a homeland and identity by juxtaposing Homer’s heroic Greek poem against the story of his own parents crossing the ocean to settle in far-flung Australia.

“I’d read the Odyssey, the Greek epic about Odysseus and his adventures in Troy and I loved that,” says Lytras. “But it started me thinking about other journeys, my parents leaving Greece, and all those people who came to Australia after World War II. I realised that those journeys were epic odysseys as well.”

Lytras’ original intention was to do a one-man reinterpretation of Homer, but director and co-creator, John Bolton encouraged him to pursue the personal threads of the story. Bolton was convinced the show should be about Lytras’ own family’s experience because that was specific and real, and would resonate. So it proved to be. When Lytras began touring the show internationally, he got some surprising responses.

“Even though it’s about my family coming to Australia, it’s talking universally, it’s about humanity. And people were relating to it. When we did it in Malaysia, Indian families were saying to me after the show, ‘oh, that’s our family, we can see our story in there as well'” It was also a search for his own identity, and a homeland. Growing up in Ballarat as an Australian-born Greek, there were tensions between his own present surroundings and his parents’ past, and Odyssey is, in many way, the resolution of those tensions. “I didn’t look particularly Greek, I had fair hair and blue eyes, but we had a fish and chips shop so you’re a wog. I guess as a teenager I did some stepping back and removing myself from Greek culture because it made me different from my peers. It wasn’t until later, when I was a young man, that I wanted to re-engage.”

Odyssey was first performed in 1998, in Hobart. Later that year, it played at the Melbourne Arts Festival. Since then, it has toured extensively, in Australia and overseas, playing at the Barbican Theatre in London, as well as in the US, Canada and New Zealand. When it returns to Melbourne later this month, it will have been a long time coming.

“The last time I performed it in Melbourne was at the 1998 Festival in the very first year I created the show, so it’s been fourteen years. Since then, the show’s been all over, but lot of people have asked me when they would get to see it in Melbourne. So I thought it was about time I performed here again, I’m bringing it home basically. As both rollicking comedy, and gentle poignancy, Odyssey is nevertheless a product of its time. It was conceived in the latter half of the 1990’s, when Pauline Hanson was prescribing exclusionist notions of ‘Australianess’. Lytras, who had already been through this as a teenager, felt very uncomfortable about it.

“She’d made her maiden speech about Australia losing its identity, losing touch with who ‘we’ were as Australians. I felt that the way she was defining ‘Australian’ didn’t include me and didn’t include a lot of the people I know. I wanted respond to that, and say ‘this is an Australian story’. Who has the right to say someone is less or more Australian than anyone else? ” The play’s enduring appeal indicates these themes are as relevant as ever. It’s unexpected but gratifying for Lytras whose own growth has been reflected in the play’s development. In this sense, Odyssey has proved an epic journey in itself.

Friends joke that Lytras may yet have some way to travel with it; after all, Odysseus was away twenty years. He appreciates his good fortune, feeling privileged to have had such an opportunity. Living now back in Ballarat, with a family of his own, his own quest has been largely fulfilled. This is not to say his passion has diminished. “Apart from the indigenous population, everyone has come from somewhere else. It’s only recently that people began arriving here on planes. Up until then, everyone came on boats, everyone is a boat person of one sort or another.”