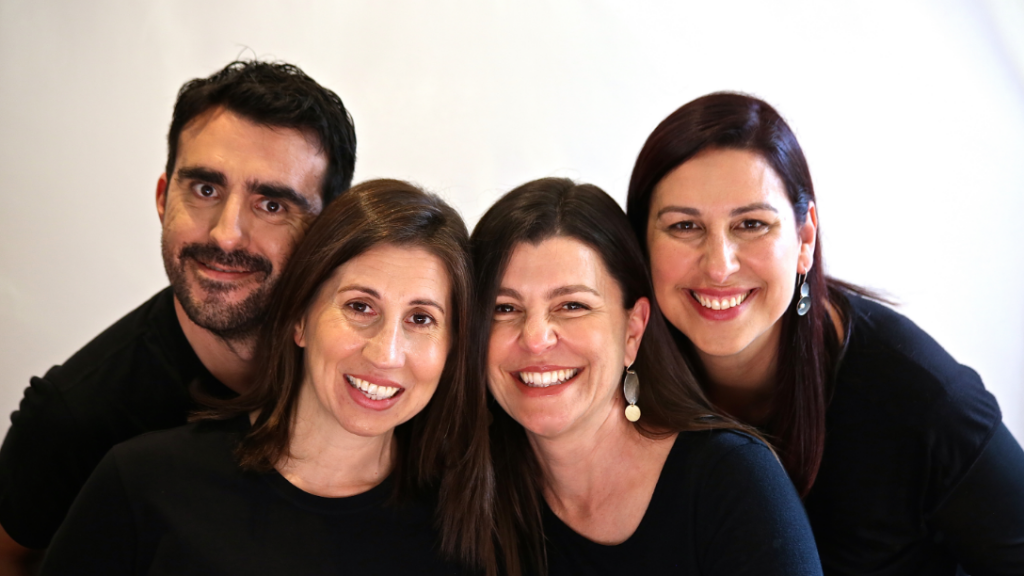 The KO Team feared that, in time, they would not only lose their loved ones, but also the rich culinary heritage bestowed upon them from their parents and grandparents.

The ‘foursome’ invites Greek Australian grandmothers and grandfathers to prepare their signature dishes and share them, through the video medium, on the Kali Orexi website.

Christine, Rita, Carlos and Kathy all agree that the best way to learn a recipe is by watching someone prepare it. Their recipes are therefore presented in a thorough but engaging way, to encourage viewers to have a try at home.

“The added bonus is that you can watch (and re-watch) the videos and learn the recipes at your own pace,” Christine Polyzos tells Neos Kosmos.

Christine was born in Melbourne to Greek parents in 1966. Both of her parents originate from Kastraki, Greece, a village nestled among the majestic rocks of Meteora. Her mother, Antigoni, is a great cook and is well-known among family and friends for her many signature dishes, including pites – tsouknithopita (stinging nettle pie), korfopita (baby pumpkin leaf pie) and spanakopita (spinach pie) – bamies sto fourno (baked okra with tomato and onions) and ntomatofai (tomato-pepper dish).

Over the years, Antigoni has taught Christine many of her signature dishes, but there are still more to learn. Christine is married to the Kali Orexi stills photographer, Eugene Maraskovsky, who is an accomplished scientist by day and a passionate urban explorer/photographer by night. The two have four children – three boys and a girl.

When Christine and Eugene’s youngest started school in 2012, Christine found herself with a little more time on her hands and began considering returning to work.

Christine had worked as a paediatric audiologist up until the birth of her second child. As she contemplated relaunching her audiology career, she recognised a yearning in herself to do something different, something creative.

An avid cook herself, she was inspired during her 46th birthday celebration at Restaurant Meteora, a slow food haven, in Kalambaka, Greece, to film Greek grandparents cooking their signature dishes.

And so the Kali Orexi story began, with yiayia Antigoni giving cooking lessons for friends, which became a huge success. Everyone had fun chatting and cooking with her while Christine videotaped Antigoni preparing and cooking the dish. Christine even taped the feasting, with everyone drooling over the pan. Word soon spread and Christine ended up hosting more cooking lessons and even attended a film course at Melbourne CAE to learn the ‘nuts and bolts’ of filming and editing.

Carlos Marquez-Perez was her amiable and intuitive teacher, with broad knowledge and experience in filmmaking. Carlos has since been relishing his Kali Orexi experience and the opportunity to pursue the worthy task of documenting the true champions of Greek cuisine – Greek grandparents, their stories and their dishes. He is also savouring the eating component, when the photographic stills of the finished dish are complete.

The next to join Kali Orexi was Rita Tsourvakas. Her educational background includes a Bachelor of Commerce Degree with Honours and a Master of Business Administration. Rita’s work experience encompasses 20 years of business planning, project management, and research and analysis roles in large corporations. As a novice foodie, with parents who are both fabulous cooks, Rita was genuinely concerned that family favourites, including spanakopita (spinach pie), galatopita (milk custard pie), baklava and lamb gyros would be lost if she didn’t make an attempt to learn how to prepare these dishes for herself. She finds Kali Orexi enables her to combine her educational background, corporate skills and intrinsic research and planning attributes with her passion for family, friends and food.

The team also realised that they needed a food-stylist; someone with incredible taste and attention to detail; someone who could make Christine’s kitchen ‘pop’. Here’s where Kathy Velakoulis, comes in. After a successful 12-year career as a pharmacist, Kathy began her new venture into styling and visual merchandising. When asked to join the very talented Kali Orexi team, she was thrilled to take up the challenge.

Meanwhile, Carlos invited Benjamin Lee, a young cinematographer from Seoul, to work as a close-range camera operator for Kali Orexi in 2014. Through this involvement, Benjamin has not only gained technical skills in camera operation, but also gained knowledge in Greek culinary culture.

Another recent addition to the team is acclaimed performer and composer Andrew Ioannou, who writes the unique scores for the KO cooking videos. This month’s video which was released on Saturday, features Vasiliki, Rita’s mum, making one of her signature desserts, baklava. This recipe is a seriously tried and tested one, as Vasiliki has been making it an average of 20-25 times per year for around 40 years.

Vasiliki’s family and friends love her baklava for its perfect balance of pastry, nuts, spice and syrup. It is also loved by the Kali Orexi team, who ‘fought’ over how many pieces they could take home at the end of filming!

To read the full recipe move on to the next page…

1. Preheat the oven to 170°C. Combine the walnuts, almonds, sesame seeds, sugar and cinnamon in a large bowl. Mix together with a spoon. Set the nut mixture aside.
2. Melt the butter on a medium flame. Remove from the flame and add the oil. Mix together with a spoon. Set the basting mixture aside.
3. Remove the filo pastry from its packaging and lay it flat between two moistened tea towels. Place one sheet of filo pastry on your work surface in a landscape orientation. Use a basting brush to baste the filo sheet with the basting mixture. Place a second sheet of pastry directly on top of the first one and baste that sheet. Place a third sheet of filo pastry on top of the first two and baste that sheet. Spread a thin, even layer of the nut mixture across the bottom half of the pastry sheet. Place a fourth and final sheet of filo pastry on top of the other three and baste that sheet. Spread another thin, even layer of the nut mixture across the bottom half of that filo pastry sheet as well.
4. Roll over the nut-covered end of the filo pastry by around 2cm and baste the rolled edge with some of the basting mixture. Continue to roll the filo pastry tightly to form a long roll. Place the open edge of the roll at the bottom to avoid the roll unravelling. Set the baklava roll aside without over-handling it.
5. Repeat basting, filling and rolling the remaining sheets. Cut the baklava
6. Place one roll of baklava on a chopping board. Use a sharp, serrated knife to slice the baklava into evenly-sized parallelograms of around 3cm in length.
Use the blade of the knife or a long, thin spatula to pick up three pieces of baklava and place in line onto a greased, shallow baking tray (avoid over-handling the baklava to ensure the nut mixture does not fall out). Repeat for the remaining rolls of baklava. Bake the baklava.
7. Brush some of the remaining basting mixture on top of all of the pieces of baklava and pour the remaining basting mixture onto the baking tray around the baklava.
8. Place the baking tray on the middle shelf of the oven (preheated to 170°C) and bake for approximately 45 minutes or until golden brown. The syrup needs to be warm when the baklava comes out of the oven, so start preparing the syrup about 20 minutes after the baklava has been placed into the oven.

1. Place the water into a deep pot over a medium flame and add the sugar. Stir the mixture until the sugar dissolves. Add the cinnamon and cloves. Stir the mixture again. Once the syrup reaches boiling point (is bubbling), boil it for exactly six minutes.
2. Add the honey, lemon juice and lemon slice. Boil for another two minutes exactly.
3. Remove the syrup from the flame and place it on your work surface. Allow the syrup to cool for around five minutes before you drench the baklava.

Allow the baklava to cool for a couple of hours before eating so the syrup thickens.
Baklava can keep for up to a week, but good luck resisting the temptation to eat it all before then!
Recipe makes 50 pieces.