Find out why people have been travelling across Melbourne to dine at Kalimera Souvlaki Art, and about their exciting plans to expand Souvlaki is not a delicacy in Melbourne. Far from it, considering the city boasts the second largest Greek community in the world – after Greece itself. So it’s fair to say that you’d be able to find a souvlaki down most main streets in Melbourne, namely during a late night out, after leaving a club with friends to satiate your hunger for the dreaded trip home.

But the humble souvlaki is no longer a food item that induces regret the morning after, thanks to the owners of Kalimera Souvlaki Art.

Part of the new wave of Greek migrants to call Australia home, Thomas Deliopoulos, together with his wife Sylvia Gabriel, has brought something special to the heart of Oakleigh; they know it, you know it, and I certainly do too. Just to be clear, I will happily make the 30km drive from home any day of the week, and I’m not alone in my commitment to what is without a doubt the best souvlaki in Melbourne – yes, I’m making the call. I remember first stepping into their Chester Street restaurant, where the delicious smells of marinated meat slow cooking on the rotisserie, together with the staff chatting in Greek before greeting me with a perfectly pronounced “Kalimera”, had me feeling as though I had been whisked away to Greece, but much closer to home, and for just a fraction of the price.

They’ve even managed to achieve the impossible, converting a country of lamb eaters to pork.

But the achievement is not all that surprising − if anyone knows pork it’s Deliopoulos, who comes from a long line of farmers who breed pigs in the north of Greece.

Coupled with their continued integrity − their motto from day one has been ‘fresh will always be the best’ − in four years Kalimera Souvlaki Art has managed to develop a loyal clientele that is growing day by day, and we in part have Deliopoulos’ wife to thank.

“I used to tell him, because I was here [in Melbourne] before, one thing that I missed was a Greek souvlaki − the pork souvlaki,” Gabriel told Neos Kosmos.

“We thought we’ll do the souvlaki exactly like it is in Greece, but even better, because in Greece now, the gyros are all frozen and this, what he does, it’s all handmade.” 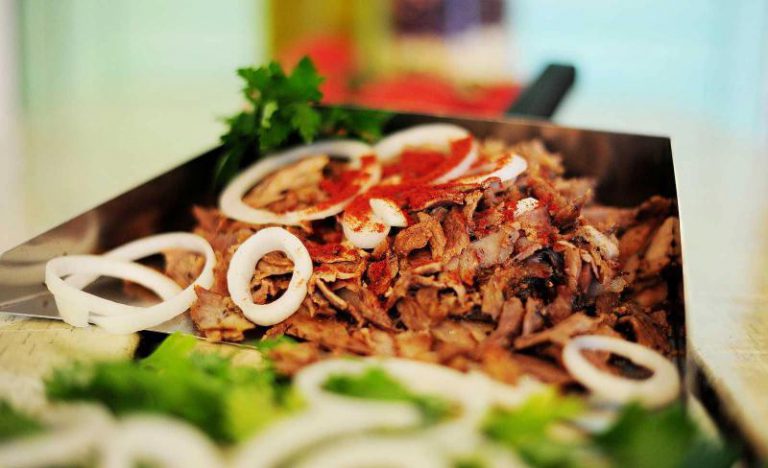 Formerly a sergeant major cooking in the Greek army for some 16 years, as the economic crisis well and truly set in, Deliopoulos and his wife decided it was time to make the move Down Under with their son, and were determined to make a real go of things.

“He knew things would be good in Australia,” she said, and it would seem he was on to something.

Since day one the restaurant has been inundated with customers, filled day and night, and has even been featured in The Age’s Good Food and on SBS’s popular series Food Safari.

“We were in shock,” Gabriel recalls with a laugh.

“When we opened and we saw people lining up, we were in shock, to tell you the truth. But we knew that no matter what, if it’s cheap, very good quality, and if we have a beautiful setting, people will appreciate it.” 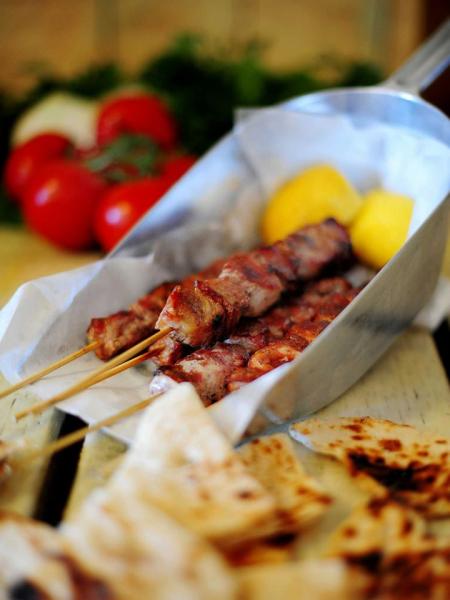 Whether you’re new to Kalimera, or on a first-name basis with the staff, you can’t go past their classic souvlaki gyro done the Greek way with pork and served with freshly cut tomato, home-made tzatziki, parsley, and chips wrapped in a soft yet crisp pita that is made from scratch by a local Greek bakery.

Your mouth’s watering, right? Well, if not it should be.

There are also chicken gyros, pork and chicken skewers and tasty lamb kebabs, along with salads and my personal favourite, the Cretan dakos made with perfectly ripe tomatoes, barley rusks, feta cheese, capers, quality virgin olive oil and oregano that is imported straight from Greece. Now four years on, and having celebrated their anniversary in October, the ambitious couple are looking to expand their offerings with the Mykonos Tavern just down the road, and if Kalimera is anything to go by, patrons are in for a real treat.

Together Deliopoulos and Gabriel have designed a space where friends and family can while away the hours listening to live music, over housemade mezedes and sharing plates perfectly paired with traditional spirits like tsipouro and rakomelo.

Yet another reason to make the trip out to Oakleigh.