The rise of Hellenic doughnuts Working in the hospitality industry was never such a far-fetched idea for the Kabylakis brothers.

Born in Oakleigh to a Greek Australian mother and Greek father who migrated to Australia when he was 13, Yani and Nic Kabylakis had just the right amount of training, creativity and inspiration from their parents when they decided to launch one of Oakleigh’s newest dessert hotspots, the Oakleigh Doughnut Co.

Their parents were involved in the hospitality industry, serving speciality coffee in Melbourne’s CBD to a largely corporate clientele.

Day by day the brothers watched and learned from their parents – who were in the food game for over 30 years – and developed a finely tuned understanding of hospitality.

“My dad always said to me, and I’ll always remember, if you get up to the alarm clock every day and work hard, you will always do well in life,” Yani told Neos Kosmos.

The two brothers, “best friends, and business partners” say they have had a “good working relationship” for many years and coupled with a passion for their heritage, food and hospitality, they felt an idea brewing.

“We are always thinking of different concepts and we always sit down and have a chat over a coffee about different things,” Yani said.

“The idea was born sitting in Nic’s garage one day just having a chat and we thought why don’t we do this? There’s a bit of a doughnut boom at the moment.”

The Oakleigh Doughnut Co was born. But it wasn’t just about your standard doughnuts. They were Hellenic doughnuts, that are touching people’s hearts.

“Being Greek is such an amazing thing, and we’re very proud to be Greek and that’s why we wanted to produce really yummy doughnuts for the Greek community.”

Following from their coffee expertise, the brothers wanted to compliment their drink of choice and to offer something new to the suburb of Oakleigh.

“We wanted to get into the suburb of Oakleigh, we just didn’t know what we wanted to do and we thought we could come up with something really creative and do a little twist on some classic recipe flavours from your childhood and turn them into doughnuts,” he said.

They got down to business, came up with a taste of Greece through their Kabylakis twists, which include the ‘Galakdough’, ‘Bakladough’, and ‘Doloumba’ amongst the usual cacophony of Melburnian flavours ranging from strawberry cheesecake to Oreo.

“We wanted to start off by doing our heritage flavours and recipes and then we are going to branch out to different parts of the world,” Yani said. Do they see their cultural background as a competitive advantage?

“Look you always need an edge,” he said.”I suppose doughnuts have been done. A lot of people are jumping on the doughnut bandwagon, trying to make a dollar. But we thought if we stick to our game plan and come up with a good concept – even if someone was to copy us – we’d sort of be the people that entered the market first with a concept like this.”

The brothers have been very hands-on from the get go, involved every step of the way.

“Every nail that’s hidden through the walls here, we were here for. We wanted to make sure we were part of everything. We had the vision. The challenge was to make sure everything was true to what we designed.”

“We’ve had some elderly women sitting down having coffee, saying how beautiful the coffee is, and having a Galakdough and enjoying it,” said Yani.

“You can’t win absolutely everybody in business, and people may say that they will get the real thing, but the adventurous people and the people young at heart, they always love to try something new and that’s what we’re offering.
“We believe that’s the trend culture in Melbourne. There’s always something new for people to try.” 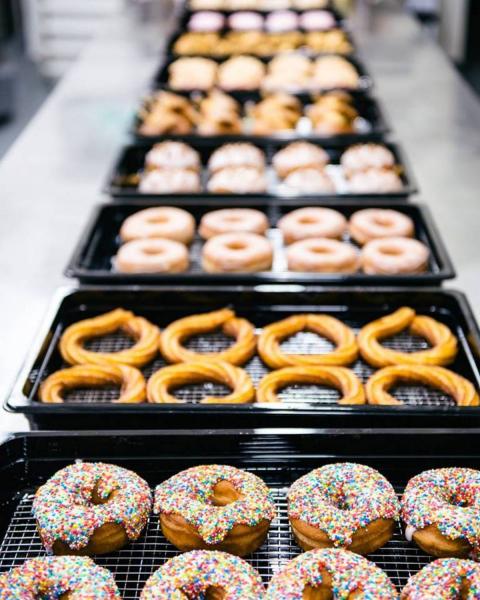 The Oakleigh Doughnut Co is located at 36 Portman St, Oakleigh, VIC. To see more of their delicious creations, follow them on Instagram @theoakleighdoughnutco