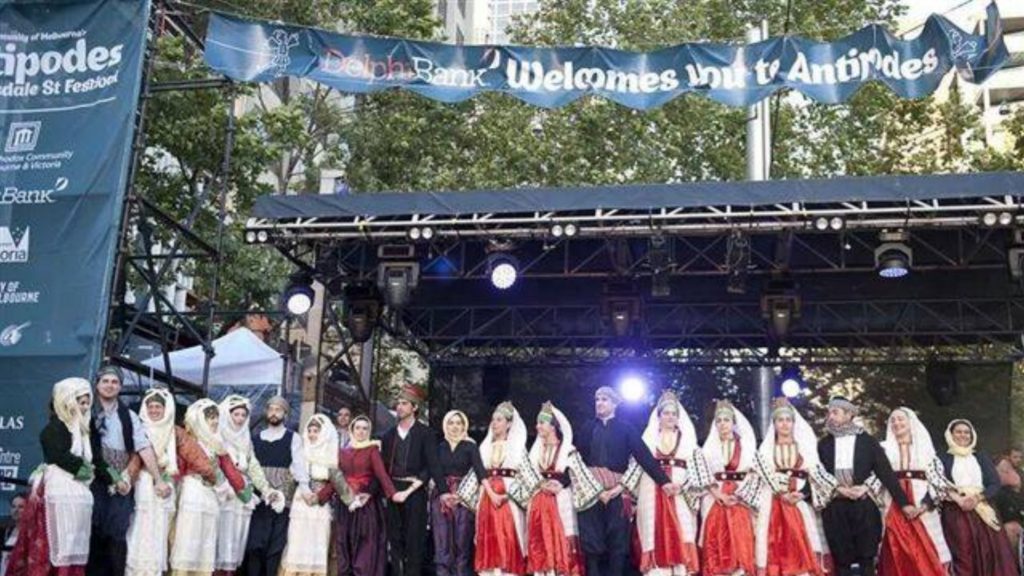 “We will be presenting dances from the karagounides of western Thessaly,” Nick Papaefthimiou tells Neos Kosmos.

The karagouna is well known to everyone but for many years a modern version was performed by dance groups accompanied by a modern song, which included a kalamatiano transition which the karagounides refer to as the pallavi (crazy) karagouna. The dance is generally referred to as svarniara and was originally orchestral but with time lyrics were added and has taken on the name karagouna in reference to the lyrics. When ordering the song with lyrics the villages say “Vara to tragoudi”.

“At the festival we will perform two authentic versions of ‘Svarniara’ that are still danced today in the villages, also a ‘Tsamiko’ with distinct steps danced by the females and a rare old form of steps for ‘Sta Tria’,” he says.

In that dance we see a ritual where during a wedding the father in law would take off his jacket and the bride would dance on it as an act of chivalry and honour. The in-laws would allow it, showing how much they respect the new daughter in law.

“We will also perform three dances that are only accompanied by vocals, which are unfortunately slowly dying out and rarely heard as there are few recordings of them as they were always sung by the villagers dancing them and not by singers from bands.”

“Most people in Australia and Greek cities are not aware of these traditions. That is what we aspire to revive,” he stresses.

Mr Papaefthimiou has been making regular trips to Greece to experience the traditions first hand from the primary source. He has been collecting authentic traditional original folk costumes and musical instruments in several regions of Greece and learnt dance steps and vocals of various style, even making his own field recordings.

The performers will start the first dance with the seryani as it was done at major festivities.

“It was sung by the women always led by the best singer and dancer in the village referred to as the gkisemi which means leader of the pack. The dance was in order of rank and age. Older women first, then married, then single girls.”

For the second performance the dance groups of the Greek Community of Melbourne and SA will perform dances from three regions of Thrace, also presenting three distinct styles of Thracian music with lyra, clarinet, and gaida.

“The dances chosen are not the common Thracian dances that everyone knows and many are being performed for the first time in Australia,” Mr Papaefthimiou says. “The dances from Bogialiki and Gavavouz are from refugees from northern Thrace.

“Historically, the Gagavouz Thracians are Orthodox Christians but speak a Turkic language similar to Azerbaijani and Turkish, with many Greek and Bulgarian words and are descendants from the ancient Thracian tribes of the Kattauzi and Krovusi. Their villages are spread through Bulgaria and Moldova. Two large settlements of Gagavouz people are in Evros and also the village of Hrisohoraffa in Serres. As Christians, after the exchange of the population between Greece and Turkey they had to leave East Thraki and move to Greece – mainly at Evros area- as the rest of the Greek orthodox population of Turkey.

“The girls will perform a ritual called Ta 40 tsaknakia, where on 9 March, on the feast day of Agioi Saranta (40 Martyrs), 40 pieces of kindling collected by the girls are set on fire and the song is sung and danced around the fire. In recent years a recording has been made with music accompanying the song; this is not traditional!”

One characteristic of the Gagavouz costumes is that they wore brighter colours than the rest of the Thracians taking influences from the costumes of Moldova in Ukraine, where many of their settlements were.

“The dance group will be wearing two different types of Thracian costumes,” Mr Papaefthimiou clarifies, adding that there will be many original costumes to appreciate, and not reproductions.
Like every year, the dance group will also perform a series of dances from ragoutsia – a traditional carnival custom.

“People love carnival dances – and not just the Greeks. Most of the audience at the Festival don’t even realise this is how ancient Greek traditions and the worship of Dionysus evolved over the years, but through the fun nature of the performance, they become more interested in the history behind it.”
“My goal is to preserve the rich Greek cultural heritage in Melbourne and Victoria and to share it with other communities as well,” Mr Papaefthimiou concludes.

“Such events, like Lonsdale Street Greek Festival, that bring together so many people are a key element of reviving Greek folk tradition in Victoria and keeping it alive it for generations to come.”