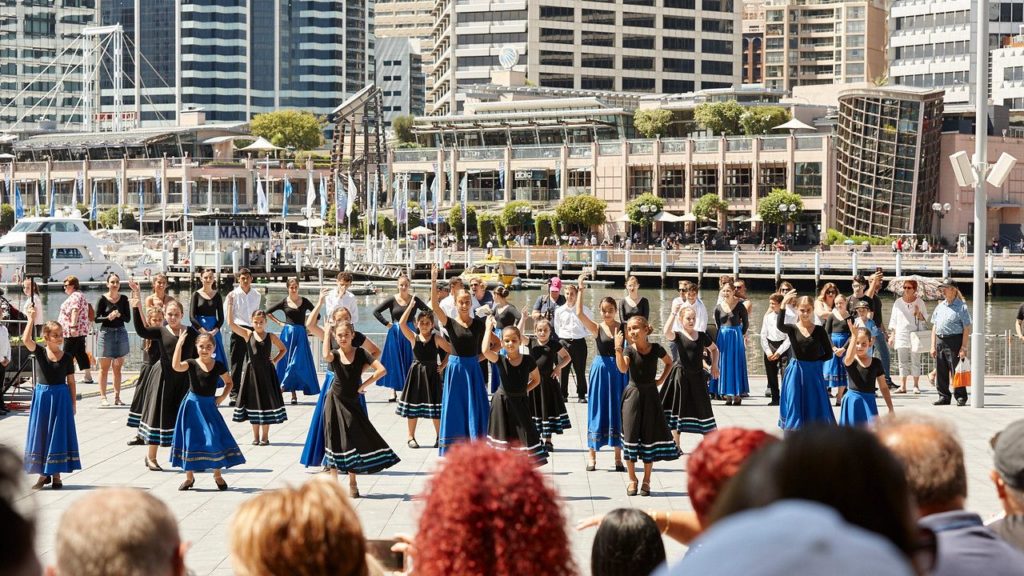 Over the weekend 100,000 people converged on Sydney’s Darling Harbour for the 37th Greek Festival of Sydney to sample the best of Hellenic culture, including dancing, live music and delicious food.

The scintillating performance by Eleonora Zouganeli whose combination of Greek folk, entechno and rock music that closed out the festival will be one that will be remembered for many years.

Performances by Melbourne Jazz group Cats and the Canary, Ipirotiko Band, Ilias Choreftakis, Maria Stavropoulou and Nikita Ellenis were also a stand out.

Along with the Greek and Cypriot dancing schools, foodies also took delight in the various stallholders who served up the many Greek savoury and sweet treats available including souvlakia, loukoumades and baklava.

Festival Chair, Nia Karteris hailed the event a success and thanked everyone who attended.

“It was a wonderful two days and obviously the highlight was Eleonora Zouganeli,” she told Neos Kosmos.

“The expectation she brought to the festival and delivering on that expectation was a credit to her. But also to the wider community who embraced her type of music – and we had a huge, massive crowd at Darling Harbour and everyone left with pleasure and a big smile on their face.”

Karteris made note of the important role that the Greek Festival of Sydney (GFOS) has in keeping alive Greek heritage in Australia.

“We are at the forefront of the diverse community that we live in today,” she said.

“It is important for us to ensure that we continue to instil the third and fourth generation with the wonderful rich culture that Greece has to offer through music and theatre and various genres that have to do with the arts.

“We need to continue this so we don’t lose ourselves, our language or culture and it’s extremely important that it continues for the next 50 years.”

Greek-Australian comedian and festival MC George Kapiniaris told Neos Kosmos that being part of the event allows him to connect with his roots in a profound way.

“It’s an honour that I get asked to represent Greek Australians as an MC,” he said.

“I like to get in amongst the crowd while the musicians are on, I talk to them, give them giveaways, and I really enjoy doing that and I love it. It’s now the 37th Greek festival in Sydney and it’s been going on longer than the one in Melbourne which is hard to believe.”

READ MORE: $400,000 funding for the Greek Festival of Sydney

Kapiniaris said the diverse range of musical acts on the stage added to the crowd’s enjoyment.

“It was all different,” he said. “When I was up on the stage on Sunday the first act was a swing band which was all classic Greek tunes and gave it a rag time feel which I really loved. Then we went to a band from Epirus who were really traditional, and from there to a band from the Chania. Even though they were traditional and had the Cretan musicians come on with them, they were really funky. Then the big show at the end of the night with Eleonora who was a bit of a Madonna, a bit of rock star. It all made it a great night.”

Darling Harbour was jam-packed and Karteris said that figure rose due to social media, which allowed the festival to reach a global Greek audience.

“Beyond Australia we have access to a massive worldwide community,” he said.

“Greeks and non- Greeks all over the world get to see how we promote Hellenism in this beautiful country of ours. I want to encourage other communities no matter how big or small to continue promoting our culture. Now that the GFOS has been established in the wider community, it’s important to show the world that Greek culture will be alive wherever we are in the world and that it’s not only based in the motherland of Greece.”

READ MORE: Check out the full festival programme of the Greek Festival running through to 24 May