Back in the ’80s, before the days of photo IDs, you’d borrow the birth certificates of older friends, memorise their details – even their starsigns (because bouncers would ask) – and spend days trying to decide which outfit would make you look like you were over 18. The girls would put on an overzealous application of make-up and stilettos where they could barely stand; and boys splashed on too much Brut and wore their school shoes because that was the only alternative they had to sneakers. Let’s say it was an exciting rite of passage.

At Alumbra, on Thursday night, it was obvious that times have changed. And young teens, Alexandra Varveris and Jake Peters, are flipping Melbourne’s club scene on its head by convincing nightclub owners, one at a time, that they should be seeking to attract a new demographic, one that has been shunned by the nightclub elite – children!

We’re not talking about seedy clubs wanting to pump up their depleting revenue by selling drinks to minors, but noble and safe alcohol-free zones for under-18s to dance, socialise and mix with people their own age, in safety. The result is a mix between the stuffy school socials with their regulations and no-alcohol policy but with the vibe of a fun club atmosphere fit for the most enthusiastic of dancers.

Quite simply, Alexandra and Jake created a place for themselves – one they found did not exist.

The idea first came about during the 2018 Lonsdale Street Greek Festival.

“We saw all these promotions of great clubs hosting events for the Greek community, but we were restricted from going because of our age, and we wanted to immerse ourselves in our culture and enjoy all these offerings without being a certain age,” Alexandra told Neos Kosmos.

Jake, too, expresses his love of his Greek culture and heritage, however also pointed to other concerns. “I’ve been to a lot of house parties where there was too much drinking, and it was not a good scene,” Jake said. “These were parties from school. Some had parents there, others did not, but there was violence and sometimes these parties would get out of control. It would spoil the fun.”

Both teens are concerned about drugs that are becoming increasingly prevalent in their generation, and Alexandra said that they “just wanted to get out of the chaos of all of that” but still have fun.

WHAT AN AMAZING NIGHT 😍🇬🇷 THANK YOU ALL FOR YOUR SUPPORT, SEE YOU SOON 👀🤫

Giving birth to an idea

So they created a buzz on social media. Each had 2000 followers, and then they created a group, Kosmos, to get the message out into the universe that it would be great to have a place for underage clubbing. “We just liked the name, it was catchy,” said Alexandra.

“It was only afterward that we realised that there was already a Neos Kosmos!” Jake said.

With the skill that a paid social media guru would envy, these two teens reached out to friends, influencers and others and grew their tribe. Very soon everyone was talking about Kosmos and its vision to get underage clubbing off the ground.

“We created an audience very quickly,” Alexandra said. “Lots of people wanted to know what’s happening, everyone wanted to be involved. It wasn’t exclusive to Greek kids but for everyone. It blew up straight away.”

“The power of social media is amazing!” Jake added.

Seeing the demand and huge interest, they decided to go ahead and plan their first event.

“Our main struggle was to be taken seriously by security, insurance companies, by any venue,” Alexandra said. “We didn’t have the money and needed our parents to guide us.”

So they put together a business plan and presented it to their parents. Accountant Desi Varveris, Alexandra’s mum, thought it was a joke at the start, but took the opportunity to make it an educational experience and got them to present a business case.

“We made them stand up and give us a presentation on what they want to achieve, what their vision is and why, and we were quietly impressed,” she said, and it was at that point she realised that the venture could succeed. “They’re pretty passionate about building a network and building relationships with their peers. They just wanted to have kefi – that was one of their visions.”

Anthea Dellas, Sauced Pasta Bar owner, said that Jake has caught on to how business works. And his interest just keeps growing.
“They started from organising an event of just 400 people to this, double the number,” she said, standing outside Alumbra, concerned about the safety. “We just want everyone who arrives safely to leave safely too.” 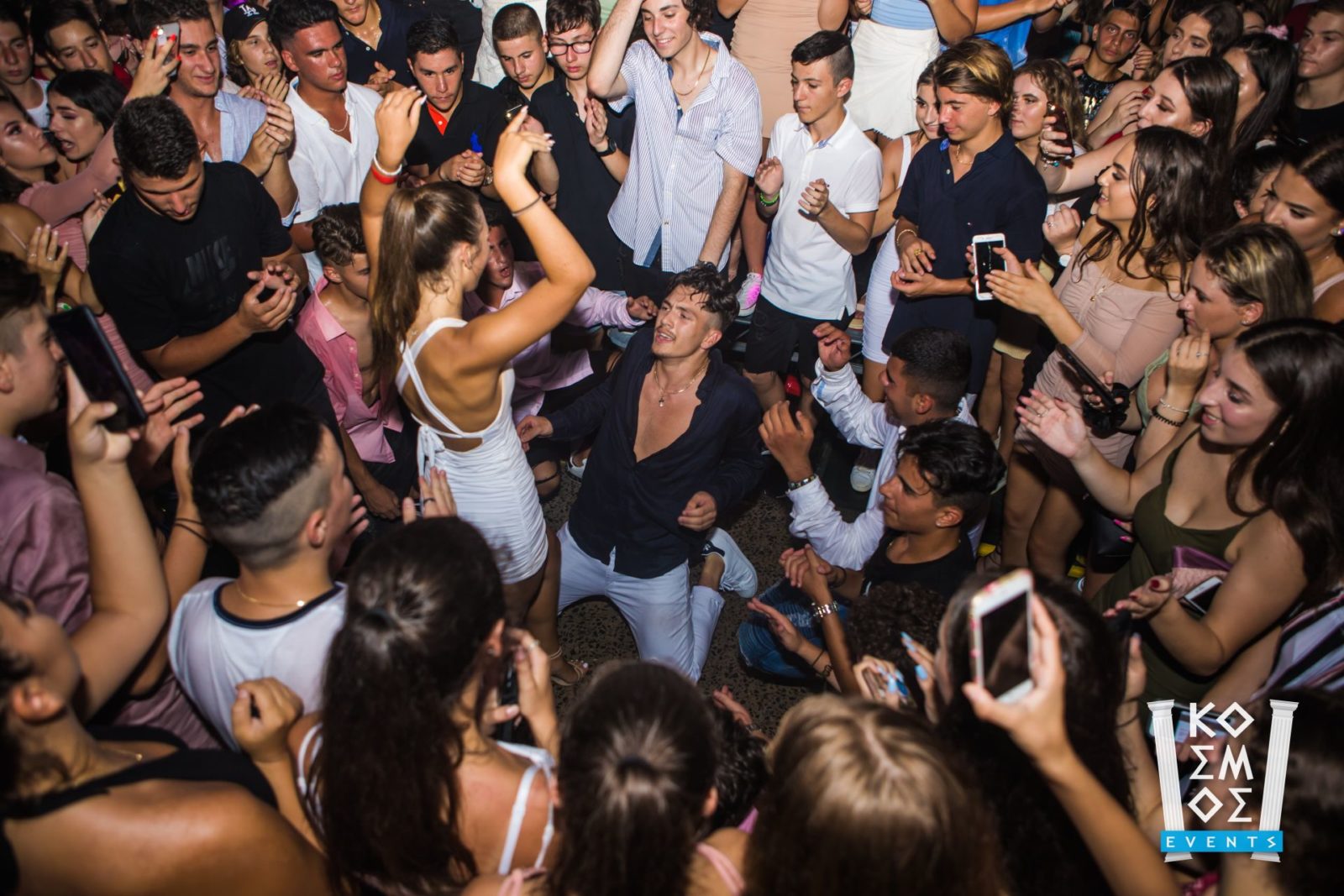 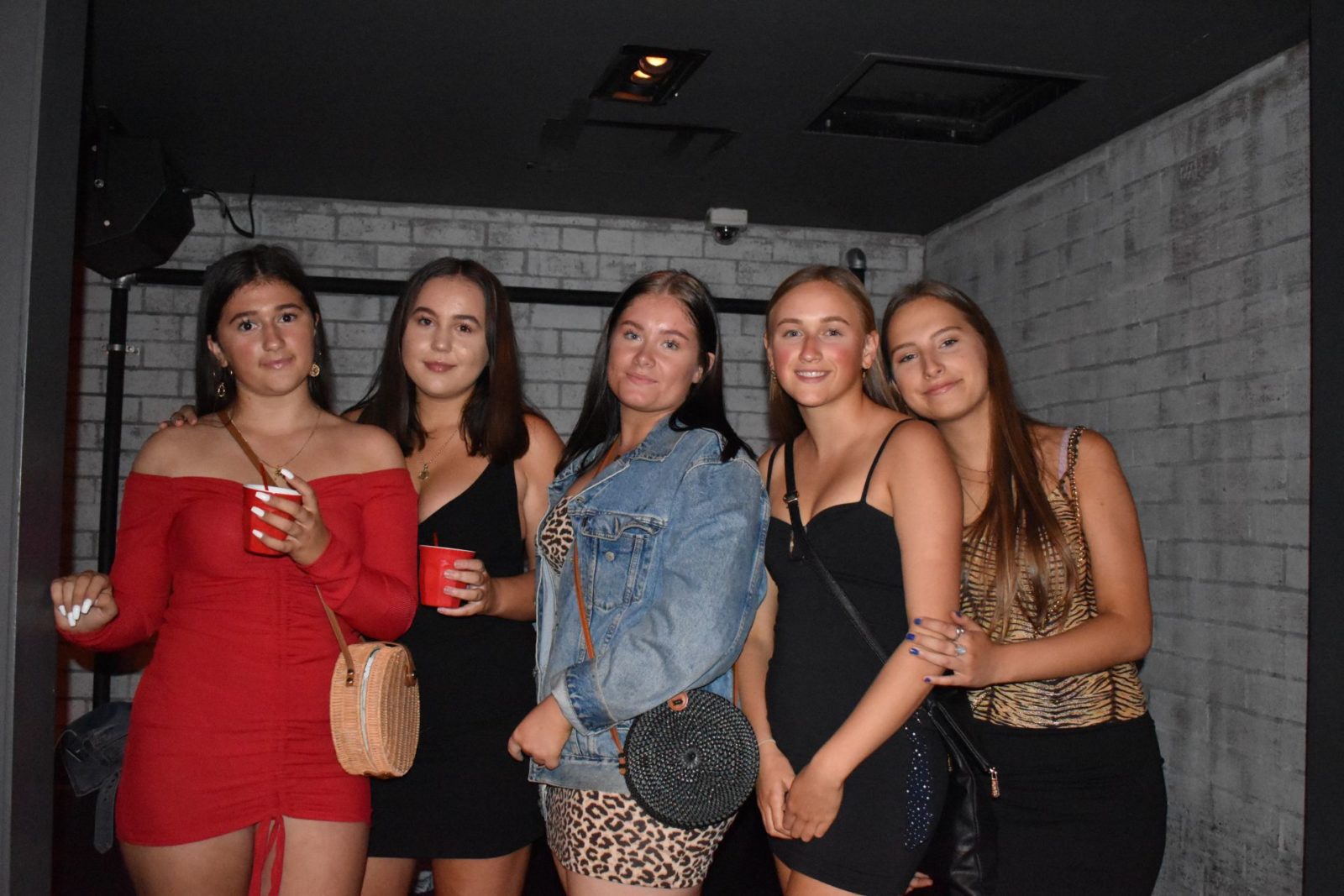 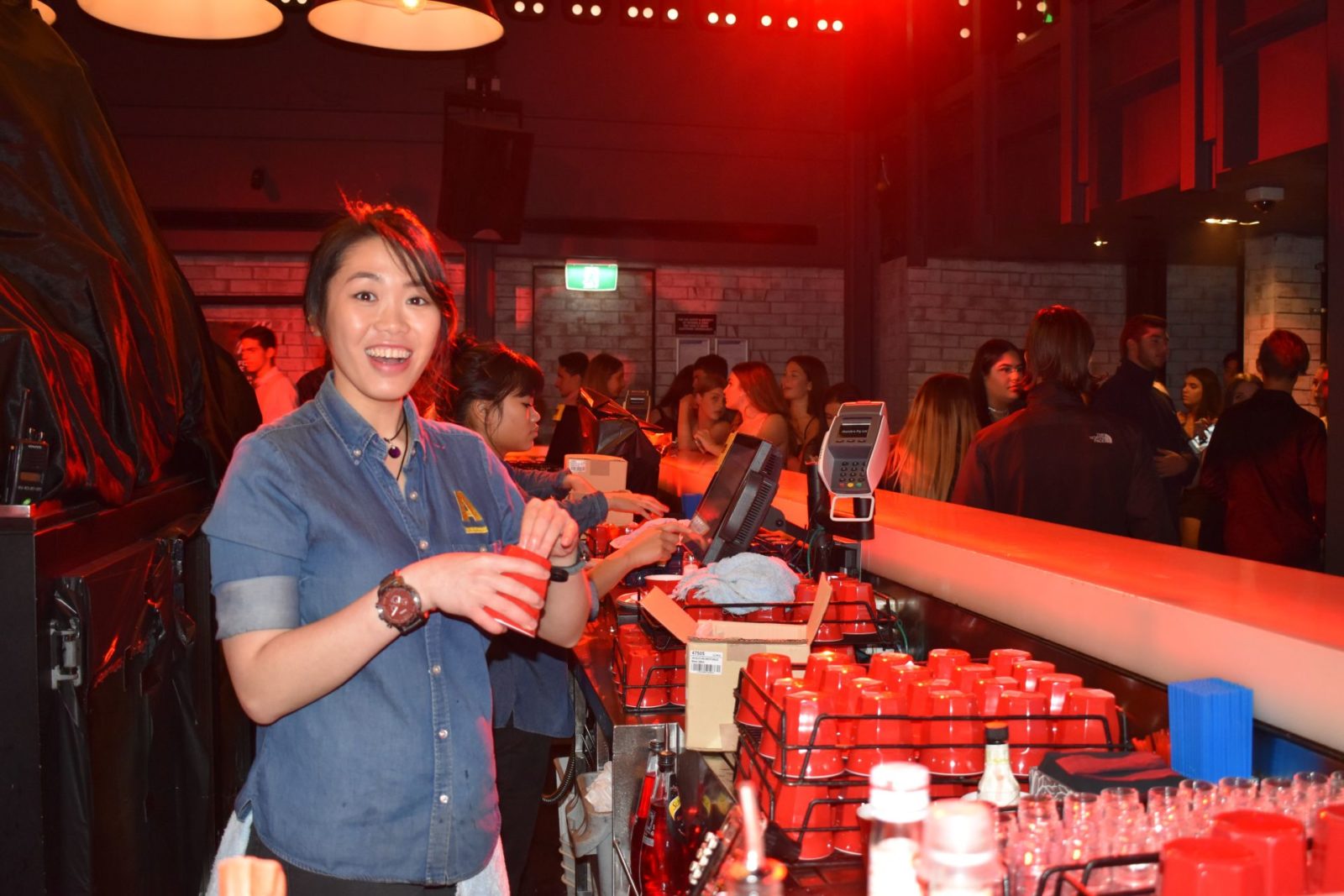 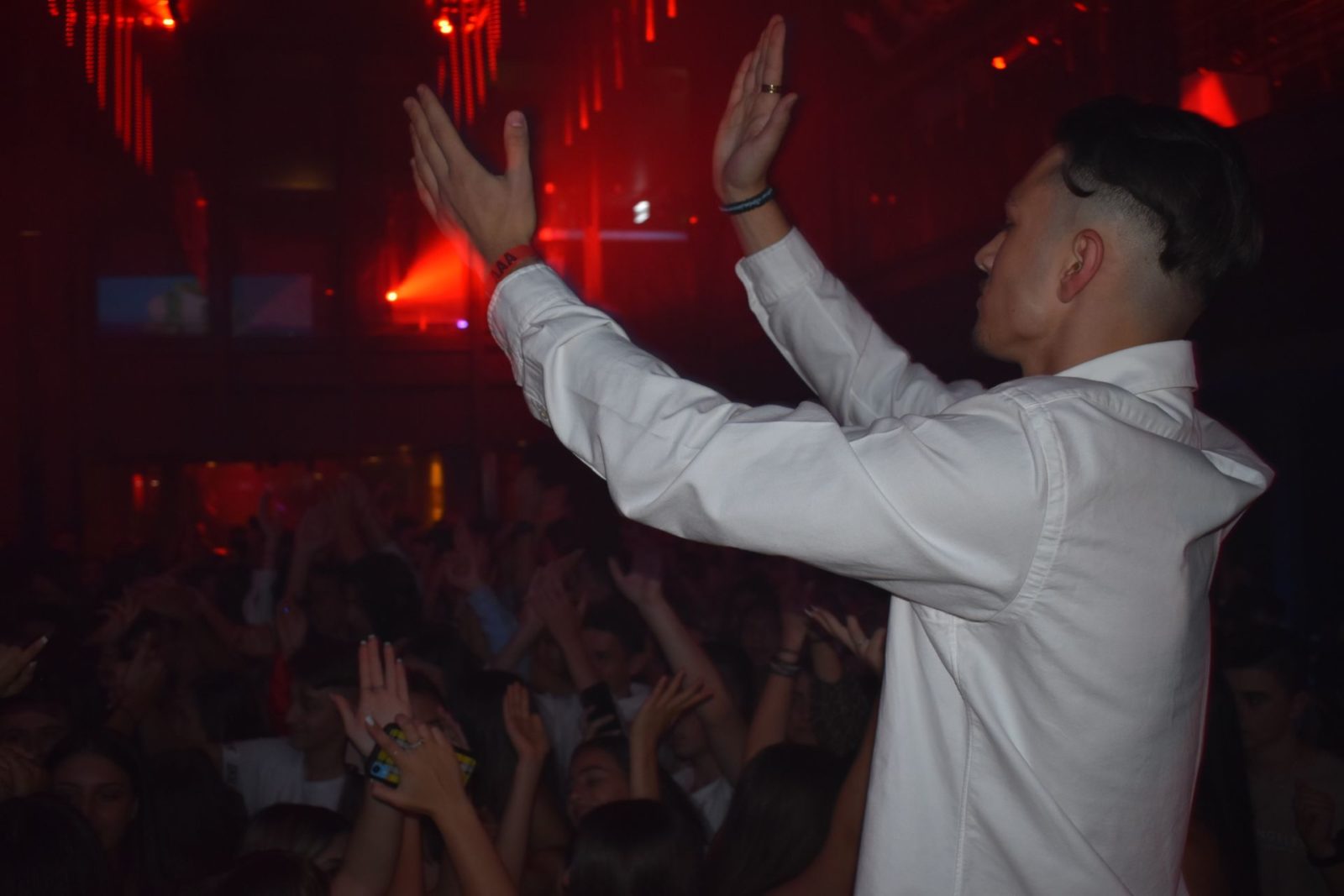 An abundance of kefi

Meanwhile inside, hundreds of teens were too busy having fun to get up to any trouble.

Michael Tantis, 17, said that he loves the Greek vibe. “It’s good to bring the Greek back to Australia because I feel it is lost a little,” he said, adding that he is sorry that he’ll turn 18 soon and will be prohibited from going to the events.

The young set rushed to get tickets and many were disappointed because the event was sold out in three days. “It’s all we talked about. I have friends who were asking me to just talk to Alex to get them in,” Kriaris-Tsotras said. “You have to get in quick. If you want to go, you have to be adamant about getting tickets.”

For Vasiliki Karamitos, 15, what has kept her coming back to every single one of the four Kosmos events is the dancing. “Nobody is sitting down. Everybody is jumping around and singing along. It is a great vibe, and never fails. It’s always a great night and just keeps getting better,” she said, adding that it seemed that everybody she knows was there, on the pulsating main dance floor of Alumbra.

Crowds swelled in synch to the latest Greek tunes, enough to make you think you were at a club in Athens, and every so often the teens would go wild. Someone brought out the Greek flag – and another flag – and then another featuring a Byzantine double-headed eagle…

A rain of confetti blanketed the crowds – and of course, pyrotechnics.

In the outdoor courtyard, groups of boys and girls segregated separately with brief moments of shy and innocent flirtation, seemingly oblivious to the girl softly sobbing in a corner as her best friend tried to console her. Underage clubbing or not, some things never change.

The only thing that is different is that back in the day, we’d hurry to grow up and go to clubs for real. These days, Kosmos is making people not want to reach the legal age.