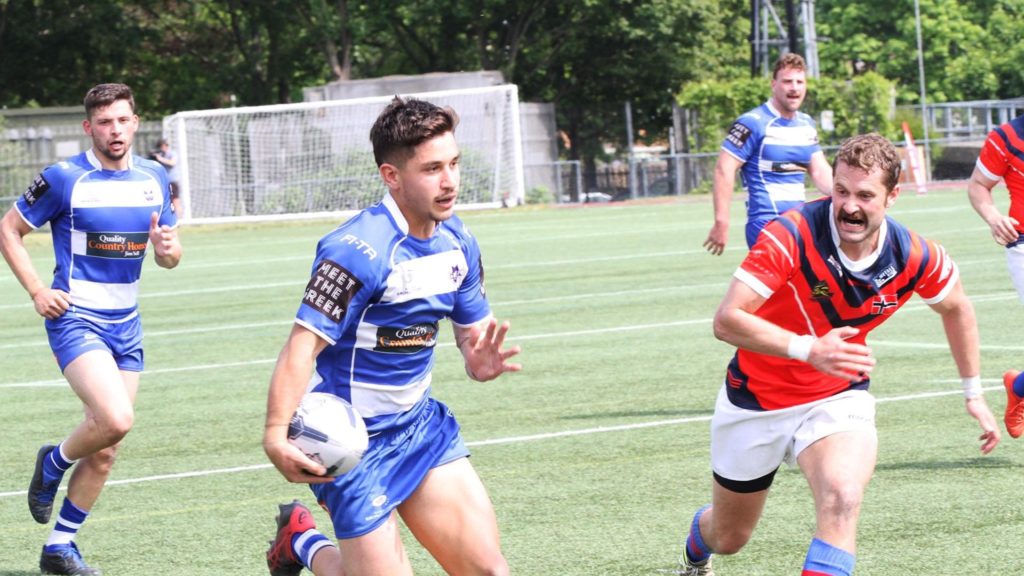 Greece are just one win away from qualifying for the 2021 World Cup after defeating Norway thanks in part to the enormous contributions of Greek Australian team coach Jim Pizanias, and rising South Sydney star Peter Mamouzelous.

Both Pizanias’ parents migrated to Australia from the island of Kalymnos. His Rugby League career saw him make the grade with St George Dragons in 1991 and 1992. After playing Metropolitan Cup for the Newtown Jets from 1993 to 1995 he also played six games for the Greek National Rugby League team.

Soon after Pizanias turned to coaching and following a stint as an assistant coach with NRL club Newcastle Knights he is the current assistant coach of the Newtown Jets and Greece.

With Greece Head Coach Steve Georgalis on Bulldogs duty, Pizanias took charge of Greece in their 56-26 win over Norway and he told Neos Kosmos the result was one of the highlights of his career.

“This is massive for the Greeks back home,” he said. “It gives them a massive lift and the players realise that if they work hard they can live a dream and that’s what most of them did on the weekend. I also said to the Greek Australian boys before the game that you should be very proud, because we have come a long way to not only play for yourselves and your teammates but your parents and your grandparents.”

Greece’s win over a more experienced Norway was even more remarkable due to the fact that a number of Greek-born players had only taken up the sport just a few months ago.

“Theodoros Nianiakas has only been playing for nine months and he has a bright future,” Pizanias said. “He is a paratrooper in the Greek Army. Grigoris Koutsibogiorgos (Aris Eagles), and Nikos Bosmos (Rhodes Knights) are also an integral part of that team and Stefanos Bastas who plays for Doncaster in England is also doing very well and I see him playing in the higher leagues in the years to come.”

Along with 13 local players, the Greece side also has four Greek Australians including Mamouzelos, the star after scoring four tries.

Pizianias believes that the teenager has what it takes to make it to the top.

“He is a very humble young kid but he is going to be a super star,” he said. “He is only 18 years old playing against men. Souths are keen on him and there are probably two or three clubs interested in his services if he can keep his feet on the ground and keep improving he is going to be an NRL player in the future.”

Mamouzelos, a third generation Greek Australian was born and bred in the Eastern Suburbs of Sydney. Both sets of grandparents migrated to Greece with his mother’s family originally from Zakynthos while his Dad’s side hails from Kalymnos.

The 18-year-old currently plays for the South Sydney Jersey Flegg (U20) team and has followed in the footsteps of his father who was also was a Rabbitohs junior. He told Neos Kosmos that representing the country of his family’s heritage in his first senior international was an emotional experience.

“It was a great honour. I lived with my grandparents for a bit and to see how passionate they are for their country, it was a great achievement,” he said.

“Especially after the game, my dad tried to hide it but he actually started crying. I have never seen him cry before, so to put on that jersey to represent my culture and my last name is a great honour and it’s something that I will cherish forever. I’m pleased with my performance, scoring four tries, you can’t really complain about that but I’m happy the team won and we were able to put in a strong performance.”

Mamouzelos is confident that the result against Norway will inspire his fellow Greek Australian teammates at Souths, Nick Mourgias and Lachlan Elias to join the cause for the crucial games against Scotland and Russia.

“I’m trying to convince them to come and play in November,” he said. “Lachlan played for Australia in Rugby Union last year, he is a great player and Nick has represented his state. To have them in the team would add a lot of quality. But our main focus is for the Greek boys to go back to Greece and keep the level high and working on their game and come November they will be ready to go. We can’t wait and we are really excited to see what happens.”