‘A Caring Father, An Honest Brother and A Sincere Friend’ – Archbishop Makarios Enthroned in Sydney

“Turning to our youth, I want to assure you that the church is a sacred institution that will never betray you,” said Makarios A huge crowd gathered on Saturday morning to witness the Enthronement of the newly-elected Archbishop Makarios at the Greek Orthodox Cathedral of the Annunciation in Sydney.

As the early morning fog lifted, scores of faithful joined dozens of clergy in anticipation outside the courtyard of the Cathedral, many dressed in school uniform and traditional Greek costume.

By 10 o’clock, an hour before the Enthronement ceremony was scheduled to begin, the Archdiocese compound was already largely filled with people, from the garden adjacent the Cleveland Street entrance to the two halls of the Cathedral proper and the adjacent St. Andrews Theological College
respectively.

At 11 o’clock, Police cordoned off Cleveland Street between Regent Street in Redfern and Pitt Street in Surry Hills as row after row of Orthodox priests, led by Sydney-based Bishop Seraphim and Metropolitan Stephanos of Tallinn and All Estonia, flanked Makarios as he arrived by car.

Children threw rose petals, parishioners shouted ‘Axios’ and the church bells rung as the Archbishop then continued on-foot into the Cathedral, preceded by his parents, family members and clerical aides. Now inside, Makarios assumed his position standing at the episcopal throne, with Metropolitan Stephanos at his right hand, the invited Christian clergy seated at the northern end in front of the iconostasis and the rest of the Orthodox clergy joining the choir at the southern end.

Choirs chanted hymns of praise and thanksgiving before delegates gave their respective addresses, including the State Premier and Greek Deputy Minister Terence Quick, who had flown in from Athens on a whirlwind trip to attend the day’s events.

Congratulatory messages continued from the Metropolitan of Maroneia and Komotini, Panteleimon, who paid tribute to the many waves of Greek migrants who had travelled to Australia and blessed their new homeland with their sweat and tears.

The Metropolitan of Paphos, Georgios, gave a particularly impassioned address warning against challenges to Cypriot sovereignty, repeating sentiments he raised in a speech while visiting Athens in March.

Several of the guest speakers presented ecclesiastical gifts to the Archbishop, including icons, silver dishes and gold crosses, which he gladly accepted before giving an address of his own; first in English, then in Greek.

“I declare before this overflowing church, that my foremost desire and plea to all of you is that we sanctify the whole of Australia with the life-giving Gospel,” said Makarios.

Arguably the most dynamic words from the Archbishop’s address were reserved for the younger generations in the community. 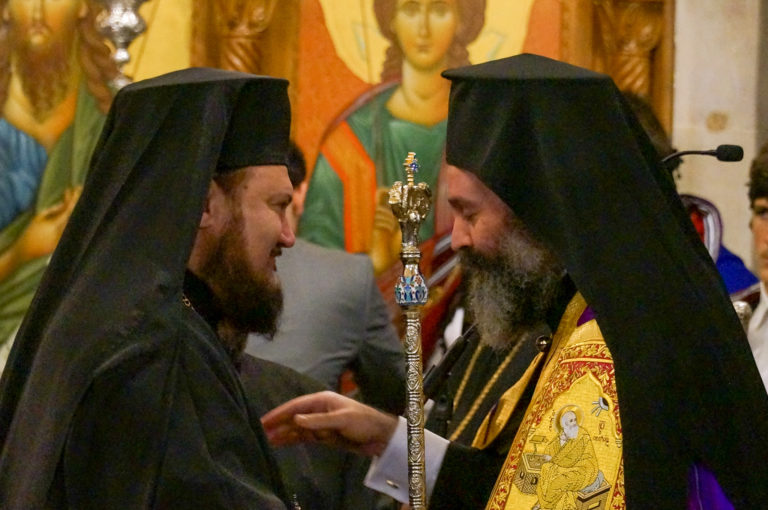 “I plea to our youth, trust in the church and remain close to Christ. While people may sometimes let you down, Christ will always be there for you; through sorrows and trials, through youthful mistakes and failures.”

The Archbishop invoked the 2016 Encyclical of the Pan-Orthodox Council, which had met in his native Crete, by adding that “young people constitute the priority for the Holy Archdiocese of Australia; they are not simply the future, they are also the present of the Church.”

“I wish to be with you all, in a communion of life; [to] be a caring father, an honest brother and a sincere friend.”

The Archbishop repeated his address in full in Greek, after which the Enthronement ceremony proper was concluded and dignitaries quickly made their way from the Cathedral to a luncheon being held at Doltone House.