The ancient past of Peristeri will soon be open for exploration!

Greece’s rich underwater heritage has long been hidden from view, off-limits to all but a select few, mainly archaeologists – but all that is about to change “This was never going to be ‘just another dive.’ The anticipation alone had already made it special. I had been dreaming of being granted access to the Peristera shipwreck for a very, very long time.”

Kostas Menemenoglou’s remark perfectly encapsulates the feeling of many recreational divers from both Greece and abroad. Despite being at a depth of just 25 metres, this ancient 5th century BC wreck is situated in a marine park which restricts the opportunity. Moreover, it is illegal to dive any archaeological site in Greece without having first ploughed through a mountain of bureaucratic red tape to attain explicit permission. Since its accidental discovery in 1985 by fisherman Dimitris Mavrikis, the Peristera wreck has, therefore, been strictly off limits to all but a few lucky archaeologists.

However, according to UNESCO, the United Nations body which is responsible for the protection of underwater cultural heritage, allowing access to sites makes “protection more valuable, less exclusive and better understood.” In this vein, the European Union’s BlueMed programme and the Greek Minister of Culture have proposed a new initiative to promote marine tourism and ‘Underwater Museums’.

So, somewhat unexpectedly, Kostas was to finally get his chance. He was among a select group of recreational and professional divers permitted access to the Peristera wreck for two days earlier this year. This represents a major reversal of thinking. For fear of looting and damage to historically significant sites, recreational diving was not permitted in Greece until as late as 2005. Since that time, however, local divers have proved to be far more respectful than initially feared. Many have attempted to piece together local maritime history. Indeed, quite a few 20th century wrecks have been discovered and identified by the combined efforts of Open Water and Tech enthusiasts.

The new plan is to authorise guided thematic tours of the Peristera wreck and several other more modern shipwrecks around the South Pelion, Northern Evia and Sporades Island area in central Greece. The initiative will also be extended to other sites in Greece, Italy and Croatia. Excitingly, the first sites may be open to the diving public as early as next summer. There are also plans to facilitate dive simulations via virtual reality to the general public as well.

Any given diving tour will be preceded by a full briefing, covering historical, safety and logistical aspects of the dive. Ancient sites are particularly vulnerable to potential disruption, so divers will also be reminded of regulations pertaining to antiquities and culturally significant artefacts.

“Ours was a test dive to ensure that no damage will be done when the site is finally opened to the public,” explained Kostas. “More dives will be undertaken this summer to determine the optimum dive plan that has the minimal impact on the site. This also includes any potential impact on marine life. In the case of Alonissos Marine Park, that particularly includes the Monk seal.”

It is a short boat ride from the small picturesque port of Steni Valla on Alonissos to the site. “Just a few minutes after we splashed into the crystal clear waters of the Aegean, I could hardly believe my eyes,” Kostas told Neos Kosmos. “Below us on a gentle sandy bottom covered in sea grass was a mass of amphoras at a depth of around 25 metres. This wasn’t like looking at an amphora on some museum shelf. This was the real thing! The realisation that such a concentration had been lying there in layers – totally untouched for over two millennia – was simply astonishing.”

The upper timbers of the wreck have long been lost to time, leaving only the cargo in situ. As many as 4,000 ceramic amphora jars, most of which are still fully intact, create a mound which is approximately 25 metres long, 10 metres wide and up to 3 metres high. Amphora styles vary, based on the location, manufacture date and intended use. This has helped archaeologists to determine that the Peristera wreck was probably Athenian in origin and was transporting wine from the Northern Greek mainland to the Sporades. The wreck is named after the closest island in its vicinity, Peristera.

Amphoras were originally invented by the Canaanite culture in the 16th century BC. Recognising their value, the Greeks adopted the technology in the 7th Century and used them for bulk seaborne trading. Being inexpensive, disposable and versatile, amphoras were mass-produced and soon became the backbone of the Greek economy – a kind of robust plastic container of the day. By the time the Peristera ship was wrecked – somewhere between 400 and 420 BC – Greece had a vast trading network throughout the Mediterranean upon which both the material and intellectual wealth of its ancient civilisation thrived. To put this in context, it was the time when Anaxagoras, famed ancient philosopher and experimentalist, became the first to understand the eclipses of the moon were due to reflected light from the ‘the fiery stone’ of our far away sun. Moreover, Democritus was the first to propose atomic theory and had to coin the word ‘atom’ in order to do so. Such groundbreaking insights would never have happened without the underpinning which the modest amphora offered.

“Seeing those amphoras was awe inspiring… and it wasn’t just the abundant marine life which had made them their home. As colourful fish darted between the large jars, I had feelings and thoughts which I was simply not expecting,” Kostas said.

“Somehow, they channelled a deep emotional connection to the past. I could imagine the cargo laden galley ploughing the Aegean by sail and oar as men attempted to tame the sea and use it for their betterment. I could envisage sailors eagerly waiting to reach landfall so they could return to their loved ones. I could understand the rising confidence the ancient Greeks felt at being able to rationalise and truly understand the world around them. They were the very first to use their intellect to break free from the shackles of mysticism.

“To approach everything with logical, pragmatic eyes. And by doing so, they created the basis of the modern world we live in today.”

While the exact circumstances surrounding the wreck remain unknown, burnt pieces of timber and ash have been discovered, indicating that a fire was involved. Whether this was accidental or caused by attack is undetermined. What is of far greater interest to archaeologists, is the sheer size of the ship. Until the Peristera find, historians considered 1st century BC Roman vessels carrying around 1,500 amphoras, or about 70 tons, to be the super-large container ships of ancient times. However, the Peristera wreck is more than twice that size, suggesting that Greek ship building technology was far more advanced much earlier than anyone had thought.

Only very limited excavation work has been carried out at the site, so there are other mysteries to the Peristera wreck puzzle. One is the possibility of it carrying more than wine. Somewhere under the massive pile of amphoras might be a less conspicuous cargo. A few personal items such as cups and plates have already been recovered, but perhaps there are bronze artifacts or other treasures which can only be imagined.

Finding out represents the fundamental dilemma of archaeology and a major point of contention amongst the archaeologists themselves. Further excavation would reveal more artefacts and offer more insights into the past, including the shipbuilding techniques which allowed the ancient Greeks to build such an unexpectedly large vessel. It might even uncover the skeletal remains of her crew. However, it would also destroy the pristine nature and dignity of this memorial to our collective past. It would also compromise this new initiative of letting the public experience the majesty of the wreck for themselves. 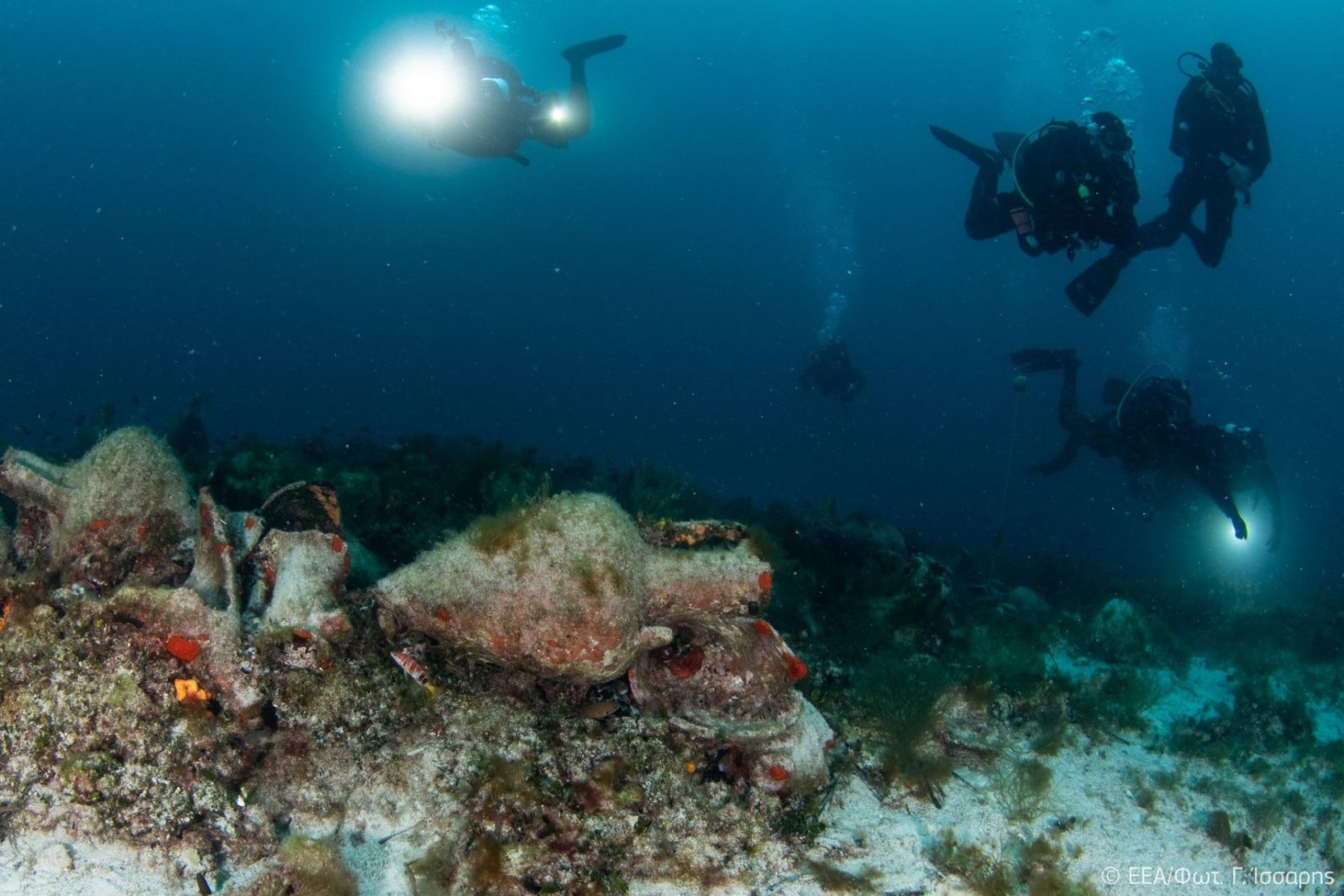 Greece’s rich underwater heritage has long been hidden from view, off-limits to all but a select few, mainly archaeologists, but all that is about to change. “The dive was a very humbling experience. And as I hovered near that spectacular mound of 2,400 year history, it made me feel proud to be part of it all. I consider myself fortunate to live in an era that is both curious and technologically advanced enough to allow such investigations, not to mention immensely privileged to be able to witness the past with my very own eyes,” Kostas said.

The goal of the new initiative is to allow recreational divers to literally immerse themselves in maritime heritage that has been denied to them until now. Judging from Kostas’ reaction to the experience, I would say that it is already a resounding success.