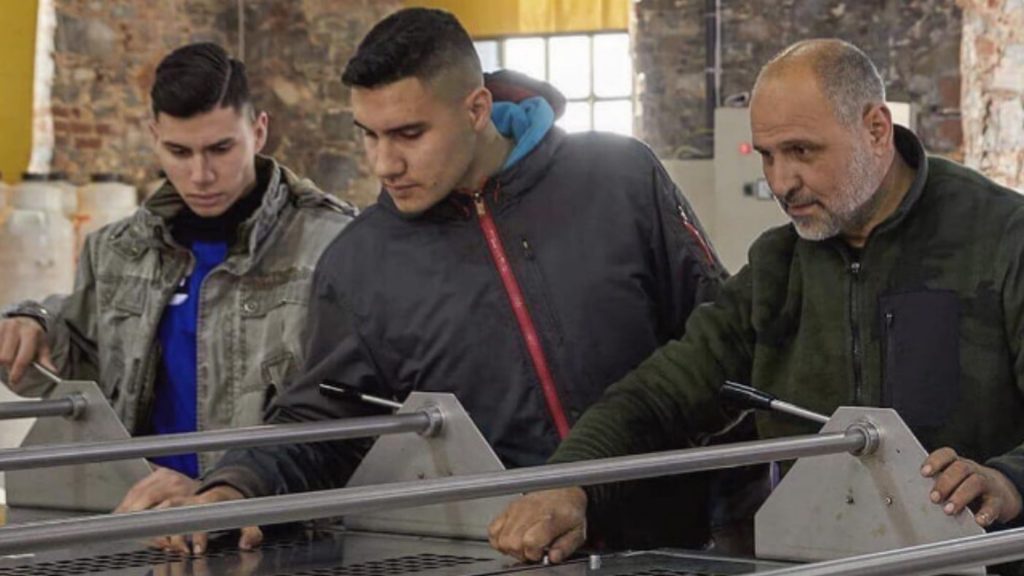 The Protoulis family in the mill.

Papadopoulos Olive Oil – Mediterre continued their impressive winning streak by following up two Extra Gold medals at BIOLNOVELLO with Extra Golds at the BIOL competition for Mediterre Alea Organic Monocultivar Koroneiki and Mythocia Early Harvest Olympia PGI Organic. Their EVOOs come from olives grown between the mountains and the sea in Elis (Ilia), near ancient Olympia. Taking advantage of both experience and education, according to Eva Papadopoulou, their team takes great care to both protect the environment and produce premium Greek extra virgin olive oil. To help support biodiversity and present consumers with new flavors and aromas, they work with less common olive varieties, in addition to the Koroneiki so popular in Greece: such cultivars as Kolireiki, Nemoutiana, and Botsikoelia.

Another multiple award winner at BIOL, Protoulis Master Olive Oil Makers (Rafteli Protouli M. & Co.), won an Extra Gold medal for Aegean Gold Bio PGI Lesvos – also the winner of the BIOL Kids prize – and a Silver for Aegaea Organic. Kostas Protoulis told Greek Liquid Gold his team mainly uses the Kolovi olives native to the island of Lesvos – the only oil in their Aegaea Organic – although in Aegean Gold Bio the Kolovi “blends harmoniously with some Adramytiani and a little Ladolia.” They allow “wild vegetation to grow next to the olive trees,” resulting in “aromas of rosemary, thyme, oregano, etc.” in their EVOOs. Even after winning 40 awards, the family’s “goal remains the same: to produce olive oil of the highest quality with a unique aroma and the distinctive fruity taste of the finest natural olive juice each and every year. Olive oil is not business to us; it’s life. No one on the island can remember family, land, property, or indeed everyday life without olive trees and olive oil. That goes back to antiquity.”

A company from another Greek island, Crete, captured two more awards for their PDO certified EVOOs: Kidonakis Bros GPtook home a Gold medal for Collection Early Harvest and a Silver for Oleum Crete. Kostas Kidonakis explained that he is part of “a third generation family business, and we were raised in the olive oil sector. It was our dream to be able to export our olive oil all over the world,” and their dream came true, thanks to their experience, consistently high quality EVOOs, ownership of their own olive mill, and collaboration with farmers who “work with high standards under our guidance.” They are now proud to be starting a collaboration with the Walmart stores in the USA, “since those huge buyers trust us and sell our olive oils,” confirming that “we do a good job.”

Gold medal winner Eftychios Androulakis also produces his Pamako Mountain Organic Blend EVOO in Crete, but working with just one partner, he is satisfied with smaller quantities. He told Greek Liquid Gold “we produce only organic EVOOs because we care about what our customers eat and give to their children. Food is our medicine, as Hippocrates said, and for this food to be medicine, it has to be clean and pure!” Androulakis feels his four awards in three years from the largest competition dedicated solely to organic EVOOs “mean that our hard work and obsession with producing a high quality organic EVOO” are worthwhile. This encourages him “to try harder and do more and more experiments every year,” aiming for the most flavorful, healthiest EVOO he can create.

Another producer who believes that small-scale organic production “is better for the trees as well as for the consumer,” Theodoros Koutsotheodoris, won a Gold medal for his Olive Poem EVOO. As Koutsotheodoris explained, “I have always considered the traditional cultivating methods of the olive trees in my area an act of poetry”—hence the product name. “The love and care shown by the man for the tree and the soil are remarkable, and I chose to use the best practices of this method. However, I also believe that art should evolve,” so “current knowledge and modern equipment are key elements” in his team’s production process. The soil and climate, an early harvest, and organic cultivation also helped create the excellent Koroneiki and Myrtoelia olives for their oil.

Greenolia produced a well-balanced early harvest Gold medal winning blend as well, mixing the oils of mild Amfissis olives from Stylida, central Greece, with spicier Koroneiki from Peloponnese for “a new unique taste,” according to Kerasia Skiathiti. The Greenolia team began as “a family business that gradually grew” thanks to their “love for the olive tree and its production.” For an Air Force pilot, initially, “the family olive groves were simply part of his childhood memories.” After the olive groves began to enchant him in a more serious way, he established Greenolia. The pilot’s “vision, as well as his love for nature and its valuable fruit, was shared by a chemist” who brought a usefully different perspective to Greenolia. They “believe that organic cultivation is a fundamental method” necessary “to conserve a healthy ecosystem.”

George Proestakis reported that Ziro Sitia “produces organic olive oil because our philosophy is that we want to offer our customers nothing less than what we’d offer to our children. I think that explains a lot.” This is important, since “our business partnerships both in Greece and abroad have become lifelong friendships. We really get to know the people, and they are not just customers to us.” Like Greenolia, the Ziro Sitia team harvests early for their Gold medal winning Organic Ziro, transporting their Koroneiki olives in crates rather than sacks and processing them the day they are harvested—a few of the modern techniques learned in Greek and Italian seminars. Ziro Sitia olives are grown in eastern Crete, “within the boundaries of UNESCO’s Sitia geopark, a protected area with PDO designation.”

Another carefully produced Greek Koroneiki olive oil won a Gold medal: Olympian Green International SA’s Ktima Louiza Green Organic EVOO. Stamoula Karampela told Greek Liquid Gold “our distinction in BIOL indicates the continuously high quality of our multi awarded Ktima Louiza Premium Single Estate monocultivar EVOO.” She explained that this is “a balanced EVOO characterized by a medium olive fruitiness that brings to mind ripe olives, with a prevailing scent of ripe tomato, banana, eucalyptus leaves, and herbs.” It comes from approximately one thousand trees on the organic Louiza Estate, where the time between harvest and extraction is minimized. This, and their use of modern machinery, result in lower acidity and higher quality in their EVOOs.

Under the auspices of IFOAM, the International Federation of Organic Agriculture Movements – Agribio Mediterraneo, and of the Italian Ministry of Agricultural Policies, the BIOL International Prize was established in 1996 in Apulia, Italy.

Thanks to Protoulis Master Olive Oil Makers for the photos of Kostas Protoulis and his sons that were used with this article.

All businesses, organizations, and competitions involved with Greek olive oil or agrotourism or food tourism in Greece, as well as anyone else interested in supporting Greeks working in these sectors, are now invited to consider new advertising and sponsorship opportunities on the Greek Liquid Gold: Authentic Extra Virgin Olive Oil website, which reaches readers in 187 countries around the globe with news and information from the Greek olive oil world.