Historic Doric Temple of Concordia in Agrigento, open to visitors for the first time Following the iconic Dolce & Gabbana Alta Moda fashion show earlier this month which took place at the ancient Greek Temple of Concordia in Agrigento, Italy, the site is now open to the public.

Once part of the ancient Greek city of Akragas, the structures are now considered a UNESCO World Heritage Site.

It is also the largest ancient Greek Doric-style temple not to mention one of the most well-preserved temples of Greek heritage in the world, can now be seen by tourists that to this date were only allowed to to walk around the outside of the site, not to enter the structure itself.

The Temple of Concordia or Tempio della Concordia as it’s known in Italy, is the jewel of the largest island in the Mediterranean, Sicily and is part of the Valle dei Templi, or the Valley of the Temples. 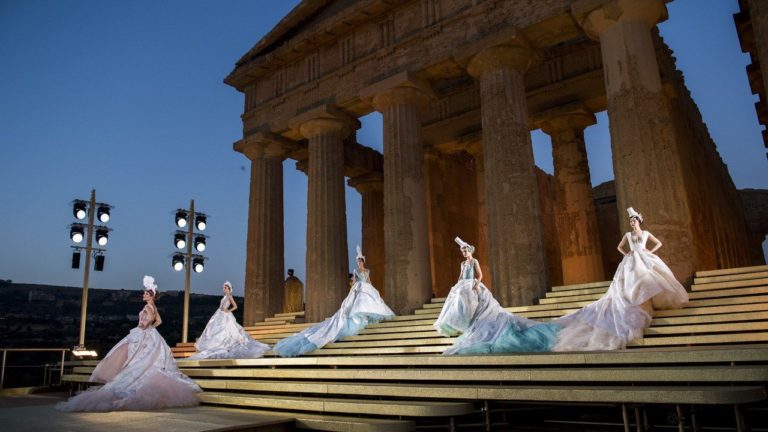 Built circa 440–430 BC, the Temple of Concordia consists of a peristasis (i.e. a four-sided porch or hallway of columns surrounding the cella in an ancient Greek peripteral temple) of six feet high columns on a crepidoma (i.e. multilevel platform on which the superstructure of the building is erected) of four steps.

ALSO READ: Can you tell where the new Dolce & Gabbana SS‘18 campaign is set?

This has been made possible thanks to the special flooring which was put in place for the Dolce & Gabbana Grecian inspired fashion show ensuring the elaborate floors are not damaged.

Getting permission and building the flooring was no easy or quick task. The planning of the show, according to the famous fashion house began a year ago, in July 2018.

Meanwhile, Dolce & Gabbana worked with archaeologists and restoration experts to ensure that the event could indeed take place without damaging the ancient structure.

Visitors can now enjoy the intricate architecture of the temple and explore until September.