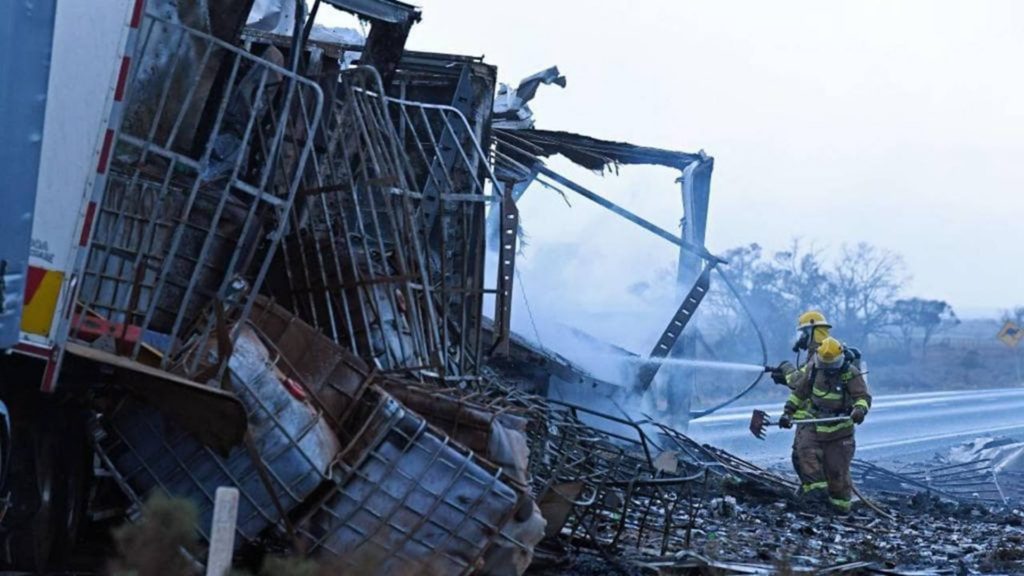 Truck Coen Fraser was driving was enveloped in flames following the collision.

Young Greek Australian truck driver Coen (Costas) Fraser is being hailed as a ‘hero’ after he swerved to avoid a car parked on the road.

The tragic accident resulted in two deaths at Sturt Street, six kilometres out of Truro, South Australia, on Thursday. Experts attribute the blame to gale-force winds that created a dust storms, diminishing visibility, and resulted in the accident.

Fraser managed to see the vehicle parked on the highway, however swerved to avoid it and hit a truck coming from the opposite lane.

Despite the fact that both trucks were driving at a slow speed at 45km/hour, the flammable material on one of the two enveloped the vehicles in flames causing the death of the two drivers.

Fraser was just a few months shy of his 27th birthday and on the verge of creating his own truck driving business.

In the aftermath of the collision, police officers allegedly searched for evidence of fatigue at the family truck company despite the fact that they were told that he was working on his own account and the truck involved did not belong to the company.

The South Australia Road Transport Association (SARTA) expressed objections to what was described as a “heavy-handed” treatment of the family by police authorities, with SARTA director Steve Shearer stating that Fraser’s mother and uncle were subjected to a raid on their premises, were not informed by officers of their son’s death and were treated “like terrorists”.

Mr Shearer objected to the fact that the police allegedly treated “these individuals who have just lost their son and nephew, as if they are criminals. And it is not acceptable.

“It is neither necessary nor reasonable. It is unconscionable and we are extremely angry.”