NRL’s Multicultural Round takes Greek Zorba dance to the rugby 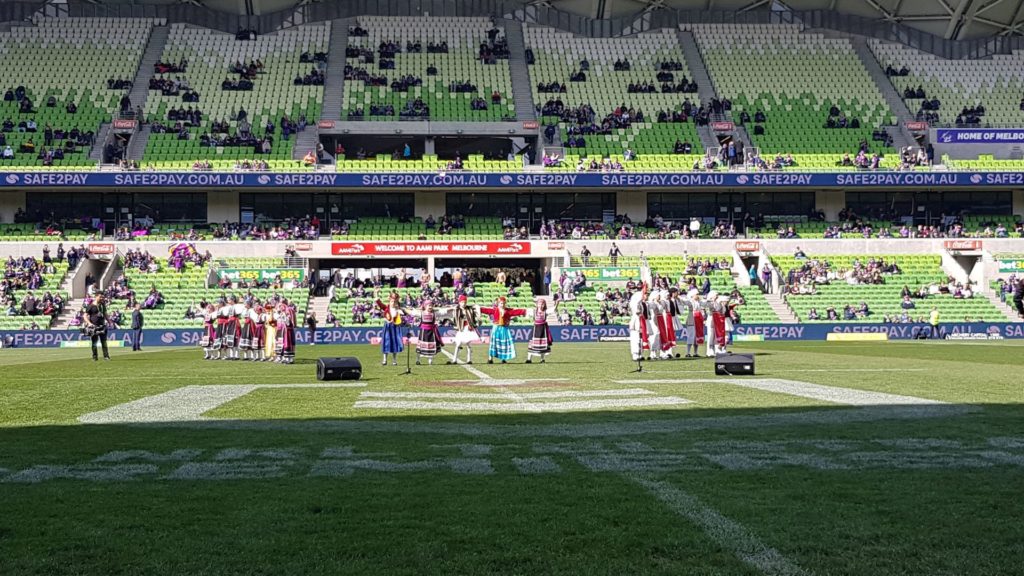 Dressed in traditional costumes, dancers of all ages from Manasis School of Greek Dance and Costumes represented the Greek-Australian community at the National Rugby League’s Multicultural Round that saw The Melbourne Storm play the Gold Coast Titans.

Rugby isn’t usually a dance that comes to mind as far as Greek interests are concerned, however once a year the NRL calls on all cultural groups to join in the fun, and for the third year, the Manasis group performed for rugby fans as part of the initiative aimed at showcasing diversity.

The dancers offered pre-game entertainment on Gosch’s Paddock in the early afternoon with attendees, including Pacific Islanders, Cook Islanders, Maoris and Indians, as well as passers-by all joining in as Zorba was performed. After the pre-game fun was over, it was time to get down to ‘serious business’, where the Manasis dancers entered AAMI Park, and danced in the middle of the AAMI Park as the Melbourne Storm entered the ground.

Our “Foustaneloforoi”, “Amalies” and array of other spectacular costumes of course stole the show with high speed, high energy dance moves, and the crowd cheered and clapped along with thousands of spectators roaring “Opa”.

“While all the cultural organisations and participants gave their best, I’d like to believe that Manasis and their ‘Zorba’ gave the Storm the energy they needed for the win!” said Manasis Director/Instructor Dimosthenis Manasis, referring to the Melbourne Storm victory over the Gold Coast Titans, 24-8.

READ MORE: The connection between Zara and Zorba the Greek discussed in NY Times