Mysteries of Medieval Mystras, Byzantium’s Indian summer and the birthplace of Modern Greece

Alexander Billinis takes us through Mystras, known as the ‘wonder of the Morea’, where the ruins have been listed as a UNESCO World Heritage Site – and with very good reason Mystras figures less prominently in historical commentary and touristic itineraries than other Greek sites, but for profundity and for a true taste of sublime, understated beauty, it is peerless. Here is where Byzantium expired, yet with its passing, the dying empire breathed life into both the Renaissance further West, but also into the Greek identity, with a renewed pride in the Ancients as well as the Byzantines. This is the Greek identity we know and cherish today, and it had its inspiration in Mystras. An author as prolific and profound as Nikos Kazantzakis put it best in Journey to the Morea, “[Mystras is] the hill where modern Greece was born.”

Indeed. A blessed, all too brief, symbiosis of topography, architecture, and the rich artistic and intellectual legacy of a thousand-year-old empire produced a trove of final achievements, made all the more poignant by the subsequent “Ottoman Winter”. If we as Greeks wish to discover where we truly come from, and to understand the true legacy we passed on to Western Civilisation in that all-too-brief Indian Summer, it can all be found in the sublime and living ruins of Mystras.

In a land as ancient as the Peloponnese, Mystras is a relative youth – one of history’s ironic accidents. Founded after the Fourth Crusade by Western Crusaders who temporarily dismembered Byzantium, Mystras began its illustrious existence as a fortress built to protect Crusader holdings in the Valley of Sparta from raids by Greco-Slavic tribes from the Tayegetus Mountains. Returned to Byzantine hands, the city would become Byzantium’s Florence; the locus that indeed inspired the Renaissance in the actual Florence and other Italian cities.

Following a generation of Crusader rule, the Byzantines regained the Castle of Mystras after its Crusader Duke was captured by the Byzantines in 1259. A city quickly grew around the citadel. Mystra’s strong defences and proximity to the fertile Valley of Sparta constituted key factors in the city’s success. In an age when Constantinople and Salonika were aching with fatigue after centuries of prominence and abuse, Mystras pulsed with the yearnings and vibrancy of youth. Many of the fading empire’s leading intellectuals and artists flocked to the city, conscious perhaps, that their civilisation was entering its twilight. 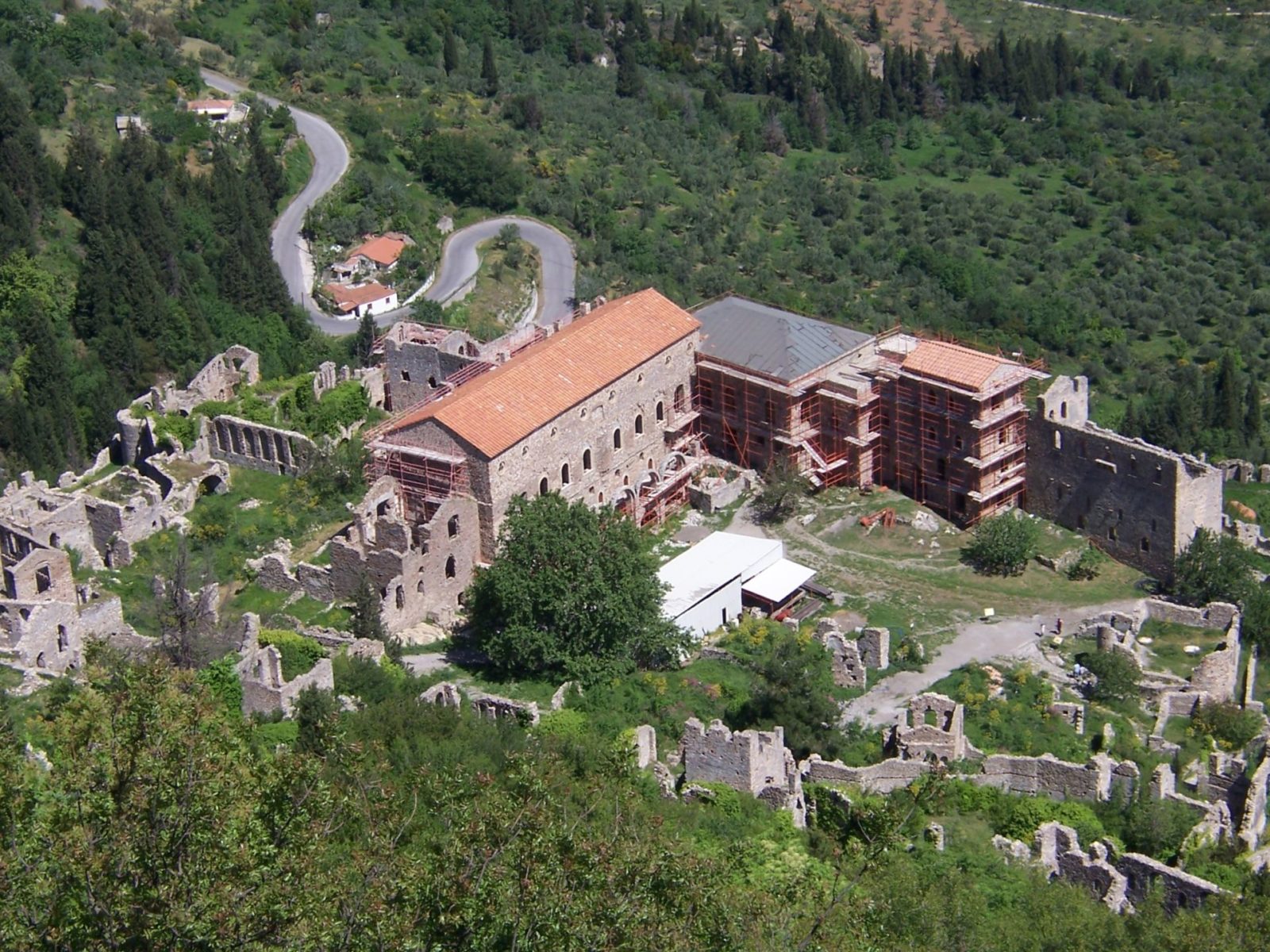 Crowning the artistic endeavours of Mystras are its churches, whose frescoes exhibit a breathing humanity. These images clearly presaged the art that would begin to flourish a few decades after Byzantium had passed into history, in studios in Italy and further West. In one church, Saint Demetrios, the frescoes stand as timeless witnesses to the crowning of the last Byzantine Emperor, Constantine XI Dragas Paleologos, who had served with distinction as Despot (Prince) of Mystras. Constantine was a brave soldier, but also a statesman who encouraged the intellectual and artistic growth in his domain. Among the philosophers who flourished at the time was George Gemistos Plethon, who actively encouraged the study of the Ancients and in many ways, re-established the Byzantines’ link with the Classical past. He encouraged Byzantine Greeks to study the ancient philosophers and to be proud of their Hellenic roots, while still remaining Orthodox Christian Byzantines. In a real sense, Plethon is the founder of the modern Hellenic identity, and he flourished in the finest intellectual environment in Europe, also, coincidentally, in the heart of Classical Greece. When we think of our modern identity as Hellenes, we have ought to remember Plethon’s legacy. Plethon also had Western admirers. In 1465, when the Venetians briefly captured the city from the Ottoman Turks, they exhumed his remains and brought them to Rimini in Italy, where his tomb graces a church there to this day. 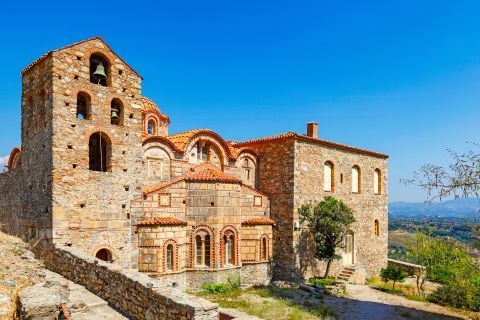 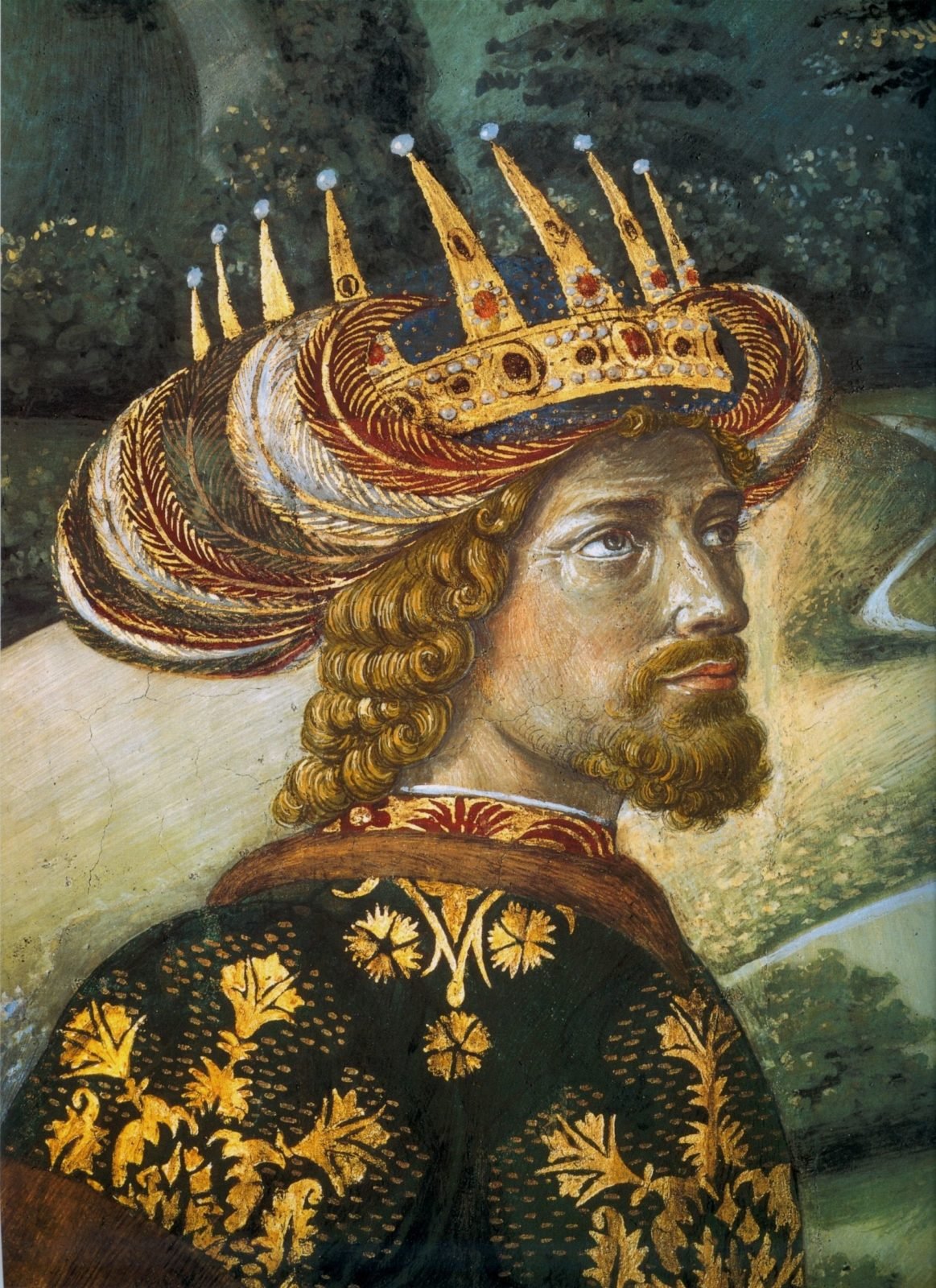 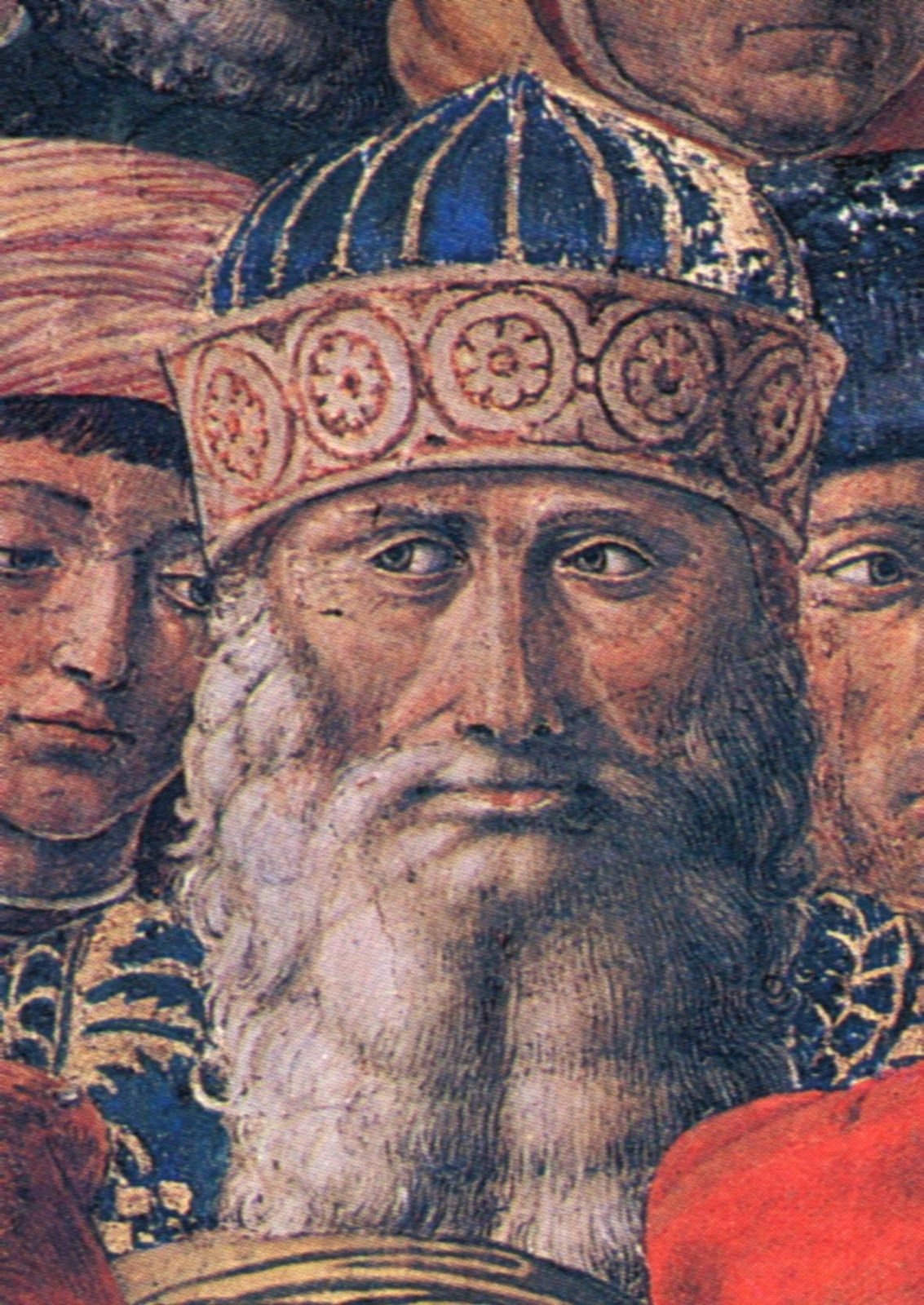 George Gemistos Plethon – in a sense, the founder of the modern Hellenic identity.

Constantine’s attempts to grow the political boundaries of the Mystras Despotate met only temporary successes, but luckily the intellectual effects, both obvious and subtle, remain for us to enjoy benefits of his rule were enduring. As Emperor, Constantine is remembered for his brave defence of Constantinople’s final, fatal siege of 1453, where he died sword in hand. It is fortunate for the legacy of this thousand-year empire that a man of Constantine’s bravery and stature served as her final emperor. His beloved Despotate of Mystras outlasted the capital by seven years, surrendering to the Turks in 1460. Unfortunately, his brother, the Despot, lacked Constantine’s steel and vision.

Often in history, countries or empires in political and economic decline produce some of their greatest intellectual and artistic achievements. In Mystras’s case, the artisans had much to draw upon; for nearly 1,000 years Byzantium was Europe’s most advanced civilisation, providing a model for her neighbours both East and West. This embattled empire preserved the legacies of Classical Greece and Rome, and in its declining years, set forth key artistic and intellectual efforts, which, subsequently in the West, would become the foundation for the Renaissance. The Empire converted the Slavs by providing an alphabet, preaching the Word, and demonstrating the Spirit, rather than converting by the sword. When we lived in Serbia, every time I would see the Serbian language written in the Cyrillic alphabet, developed by the Byzantine scholar-monks Cyril and Methodius, my heart would jump a little; it is a tangible demonstration of Christianity’s noblest principles. Sadly, such achievements are not always deemed interesting either in Western history or in current conventional wisdom. 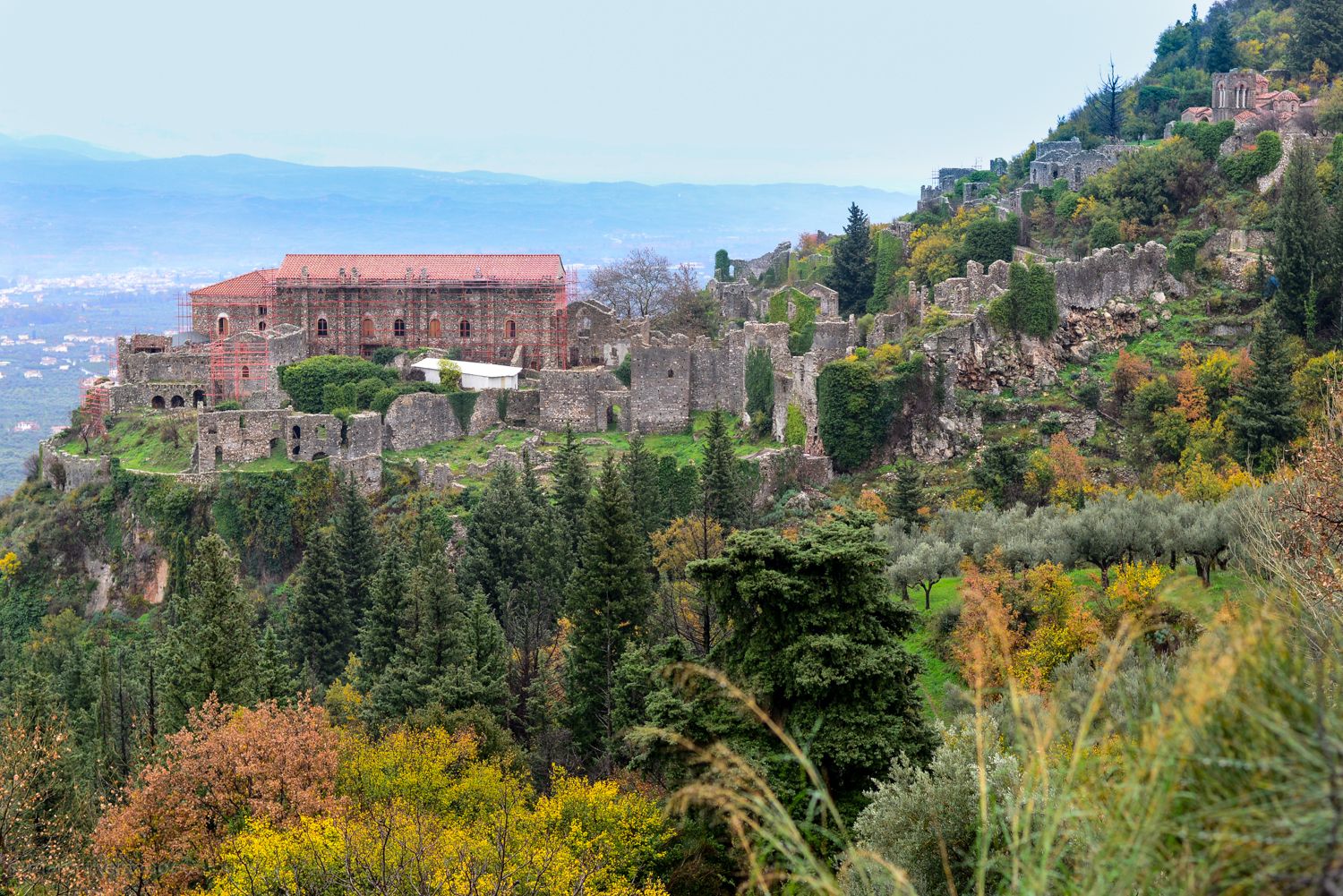 Returning for a final thought on Mystras, the visitor of today is subtly overwhelmed by the ruined elegance of its palaces and edifices, the small squares shaded by the ubiquitous mulberry and plane trees, and the cobbled roads winding to the castle atop the hill. Arched walls without roofs are like raised hands in parallel prayers of supplication to the heavens. Though Mystra has its share of visitors, it lacks the mass tourism that often resembles a traffic control pattern. Here the opportunity for intimacy with the surroundings, and with one’s thoughts, is readily available. The delicate brickwork inspired the generally unsentimental author Robert Kaplan to exclaim in his work, Mediterranean Winter, that, “for millennia artists have tried to replicate the beauty of nature. [In Mystras] brickworkers and stoneworkers had almost outdone her.”