Greece’s plans for diaspora vote: Going postal and the Danaids 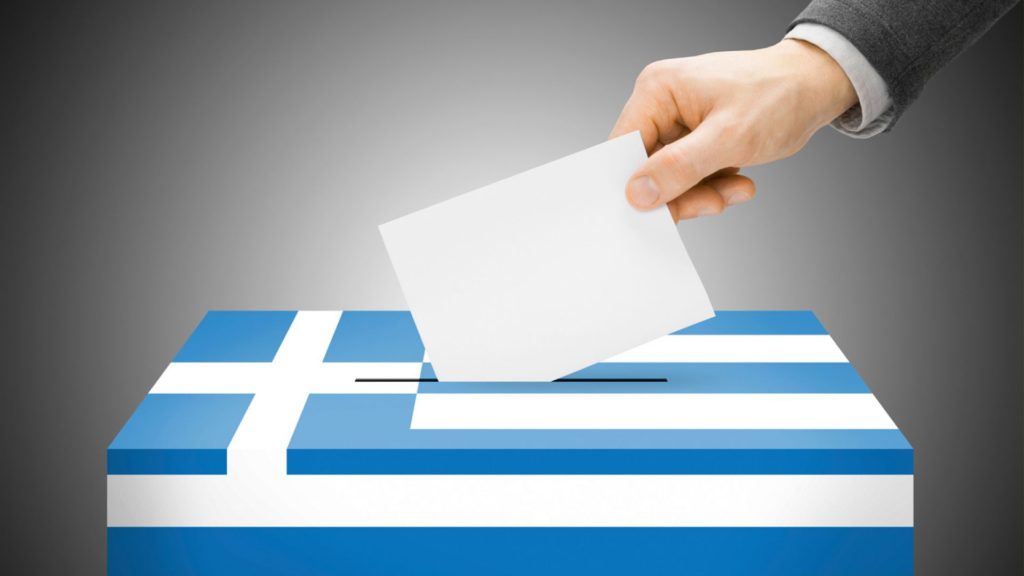 “The people who guard the rainbow don’t like those who get in the way of the sun.”
― Terry Pratchett, Going Postal

“Those who fear that the political system of Greece will be subverted by a flood of votes from the homogenes who have a tenuous link to the motherland, voting in Greek elections via post, are worrying themselves needlessly. The current legislative reform is primarily targeted at those Greeks who left the country as a result of the crisis and concerns itself with ensuring they are able to exercise their rights from the countries in which they reside,” wrote one Greek commentator recently.

The issue of the postal vote, which has absorbed the attention of Greece and its diasporan communities of late, is in fact, a rather trite one. Considering that all persons of Greek ancestry are entitled by law to apply for Greek citizenship, and thus, should they ever visit Greece, are entitled to participate in its political processes, the question is procedural rather than conceptual, involving the proper regulation of already existing rights.

What is of interest however, is the manner in which the mainstream of the motherland distinguish between Greeks and homogenes (ομογενείς), that is, people of the same genos, a term generally employed to denote ethnic kinship, which conceptually overlaps in general with the ethnic derivation of the Helladites, but clearly creates two separate classes within the tribe. The choice of terms is logical and properly reflects the geographic and historical distribution of expatriate tribe members around the world. Nonetheless, it is the juxtaposition of these terms against founding father and state-propagated ideologies of worldwide Hellenism, according to which all members of the tribe, wheresoever situated and proportion of exogenous ethnic agglomerations notwithstanding are somehow all part of the same political and ethno-cultural continuum, that is creating dysphoria both in the motherland and in diasporan communities.

The dysphoria is purely ontopathological. At its heart, is a dilemma that has troubled the Greek people since the time of Herodotus: “What is a Greek?“ and what is more, considering migration as a cultural and political phenomenon formed part of the Greek identity since times ancient: “in what respect can a person of Greek descent living outside Greece be considered a Greek?”

READ MORE: Are we the upside down Greek Antipodeans or Antioecoi?

The question was posed in antiquity, by Aeschylus, in his play “The Suppliant Women” (Αἱ  Ἱκέτιδες), written around 470BC. The narrative revolves around the Danaids, the fifty daughters of Danaus, king of Libya, who was a descendant of Io, a priestess of Hera at Argos, who was wooed by Zeus and turned into a heifer and pursued by Hera until she found asylum in Egypt. The Danaids, his daughters, were commended to marry the fifty sons of Danaus’ twin brother Aegyptus, a mythical king of Egypt, a marriage their father wished to thwart. For this reason, he constructed the first ever boat and fled with them to his ancestral homeland, the city of Argos, throwing himself upon the mercy of its King, Pelasgus and seeking sanctuary among the Argives.

For the chorus of Danaids, the choice of Argos, their place of origin, as a place of asylum is an obvious one: “What land but this would offer us a haven,/ Where else the world o’er should we welcome find,/ Having no arms but the suppliant’s feeble weapons?”

Landing at Argos and holding branches by way of seeking asylum, according to the tradition of the Greeks, the Danaids quickly disconcert the Argives. Their king in particular, noting the Greek manner of supplication, juxtaposes this against their garb and bearing, which to his mind, signify the stranger. He has difficulty reconciling the two and his immediate focus is upon how foreign they look:  “What little band is this that I salute?/ Whence come ye, not, as Hellenes are, attired,/ But with barbaric bravery of robes,/ And fine veils finished with the weaver’s spathe?/ These woman’s weeds are not of Argolis/  Nor any part of Hellas. Herald ye/ Have none; nor minister to be your friend;/ Nor guide in a strange land. And how ye dare/ Adventure here, thus utterly forlorn,/ Is matter for amazement. By your side/ Before these Gods of Festival are laid/ Branches that well accord with suppliant’s law./ In Hellas that surmise confirms itself:/ Fair dealing must conjecture all the rest,/Were there no living- voice to clear the doubt.”

The Danaids, refer, as modern diasporans do, to sanguinary ancestral myths, in order to establish their ethnic credentials: “Briefly and clearly then: Of Argive blood/ We boast to be: the mother of our race/ A cow made happy in the son she bare,/ And I will fix upon this frame of truth/ Its proper parts until the whole cohere.”

The king is unmoved by the postulation of the myth of kinship. To him, ties of blood unproven, mean nothing. It is culture that counts and their foreign looks preclude them from being members of the tribe. While they try to establish themselves as Argives, he immediately calls them the opposite, strangers,: “Women—strange women, ye compose a tale/ Not credible. How can ye be of Argive blood,/ More like to Libyans than our womankind?/ Yea, such a plant might grow on Nilus’ bank;/ Methinks, these forms were coined in Cyprian mint/ Struck to the life by your progenitors./ Stay: I have heard that nomads of your sex,/ Horsed upon camels ride in cushioned selles/ Along the coasts of Æthiopia:/ They should resemble ye; or, on my life,/ Had ye but bows I could have ta’en an oath/ That ye were the unlorded Amazons/ That fare on flesh.”

It is only after a lengthy narration of the ancestry and history of the Danaids, that the king grudgingly accepts an ancestral commonality of lineage:  “Anciently, I do verily believe,
A common tie unites ye to this land.” Yet at the same time, although by the laws of Argos, the Danaids should now be entitled to protection, King Pelasgus’ affirmation of the ancestral tie does not automatically afford the protection against harm any Argive would be afforded. For him, he continues to see the daughters as strangers, whose interests are not synonymous with those of the rest of the “trues” Argives. They can call themselves Argives, as long as they do not inconvenience the polis: “Oh, may your cause who claim to be our kin/ Work us no mischief, nor on any hand/ Strife grow from what we neither could foresee/ Nor have provided for. That to this realm/ Were an unwanted, a superfluous care.”

It is evident that to King Pelasgus, regardless what the tenets of his religion or prevailing kinship ideology may prescribe, common ancestry does not automatically grant the Danaids equal legal rights. When faced with the prospect of the angry sons of Aegyptus arriving in Argos to claim their fugitive brides, he implies that the Danaids are subject to not Argive, but to Aegyptian law: “If by the law of the land Ægyptus’ sons/ Are your rightful lords, to wit, upon the plea/ Of next-kin, who would choose resist their claim?/ Your answer must be founded on the law/ Domestic; and ye must maintain and prove/ That over ye they have no power at all.”

This dramatisation of the conflict between matrilineal and patrilineal inheritance reaches an emotional climax as the asylum seekers threaten to hang themselves upon the very ideological foundation of the polity: the statues of the Argive gods. King Pelasgus, unable, or unwilling to confer kinship upon the Danaids himself, refers the decision to the vote of the Argive people. They vote to recognise the Danaids as their peers and affrod them sanctuary. Consequently, when a herald of the Aegyptians arrives to attempt to force the Danaids to return to their husbands to be. Pelasgus threatens the herald, urging the Danaids to remain within the walls of Argos. The play reaches its conclusion with the Danaids retreating into the Argive walls, protected and, presumably, considered as Argive, not Libyan. “Pelasgus and the State at large/ Each offer us a home; and both are free.”

Of course, the Danaids did not remain in Libya and demand they have a say in the running of Argos. What is of significance here is the manner in which practicality informs the conferral of kinship. After all, the sons of Aegyptus are also Argive in origin, and thus, also potentially able to claim the rights and privileges that go with that ancestry, hence the appeal to popular consensus, rather than the application of law. Ultimately, expediency and the perceived interests of the state will inevitably trump prevailing ethnic myths and ideologies.

The Danaids of myth, true diasporans, did not remain in Argos. When the sons of Aegyptus landed in Argos and declared war on the city, Danaus, in order to spare Argos from war, handed his daughters over, instructing them to murder their husbands on their wedding nights. All of them did so except  of Hypermnestra, who refused because her husband, Lynceus, honored her wish to remain a virgin. Danaus was angry with his disobedient daughter and pursued her legally through the Argive courts, necessitating the divine intervention of Aphrodite, who saved her. Vows of virginity notwithstanding, Hypermnestra and Lynceus, went on to found an Argive ruling dynasty, which is exactly why you can’t trust those wily diasporans.

READ MORE: From homeland to diaspora: Romioi in Australia

The other forty nine hapless daughters of Danaus were condemned to spend eternity carrying water in a sieve or perforated device. Thus in the ancient tradition, they came to represent the futility of a repetitive task that can never be completed; a fitting metaphor for the interminable attempt by the Greek to define the relationship between itself and the Greek diaspora.