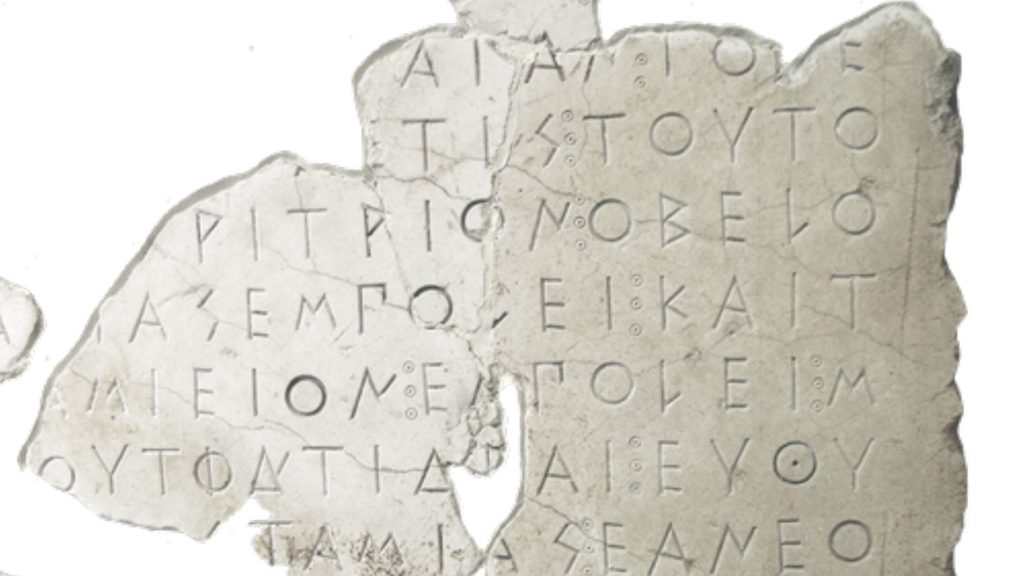 Epigraphy, the study of written matter recorded on hard or durable material, which – as a term – is derived from the Classical Greek epigraphein (“to write upon, incise”) and epigraphē (“inscription”), is a prime tool in recovering much of the firsthand record of antiquity and thus, an essential adjunct of the study of ancient peoples. However, inscriptions –as records of ancient cultural heritage- are often incomplete due to deliberate destruction, or erosion and fragmentation over the centuries. Illegible parts of the text must then be restored by specialists, known as epigraphists. However one of the problems with discerning meaning from incomplete fragments of text is that there are often multiple possible solutions.

Now, researchers at Oxford University – a Greek, Yannis Assael, among them – and Google’s DeepMind – a London-based Artificial Intelligence (AI) company- have created Pythia. Bringing together the disciplines of ancient history and deep learning, AI Pythia – which takes its name from the woman who delivered the god Apollo’s oracular responses at the Greek sanctuary of Delphi- is the first ancient text restoration model aiming to recover missing characters from a damaged text input using deep neural networks.

PythiaMore specifically, Pythia takes a sequence of damaged text as input, and is trained to predict character sequences comprising hypothesised restorations of ancient Greek inscriptions (texts written in the Greek alphabet dating between the 7th century BCE and the 5th century CE). The architecture works at both the character- and word-level, thereby effectively handling long-term context information, and dealing efficiently with incomplete word representations. This makes it applicable to all disciplines dealing with ancient texts (philology, papyrology, codicology) and applies to any language (ancient or modern).

READ MORE: Ancient Greeks, Aboriginal Australians and astronomy – Why do different cultures see such similar meanings in the constellations?

The AI seems to be better than humans at filling in missing words. To test the system, the researchers’ team hid nine letters of a Greek personal name from Pythia, and it managed to fill in the blanks. In a head-to-head test, where the AI attempted to fill the gaps in 2949 damaged inscriptions, human experts made 30% more mistakes than the AI. Moreover, whereas the experts took 2 hours to get through 50 inscriptions, Pythia gave its guesses for the entire cohort in seconds.

Even if Pythia is highly accurate in predicting missing characters in Ancient Greek inscriptions, it is most valuable when used as a collaborative tool. Pythia can decipher the text, provide the top 20 suggestions, and then have a historian choose the most accurate answer using their subject knowledge and expertise.

“It’s all about how we can help the experts,” says Assael who graduated with an Applied Informatics Degree from the University of Macedonia, in Thessaloniki, in 2013, did graduate studies at University of London’s Imperial college and is currently pursuing his Ph.D. in Computer Science at Oxford, specializing in Machine Learning. Since 2015, he is also an AI researcher at DeepMind.