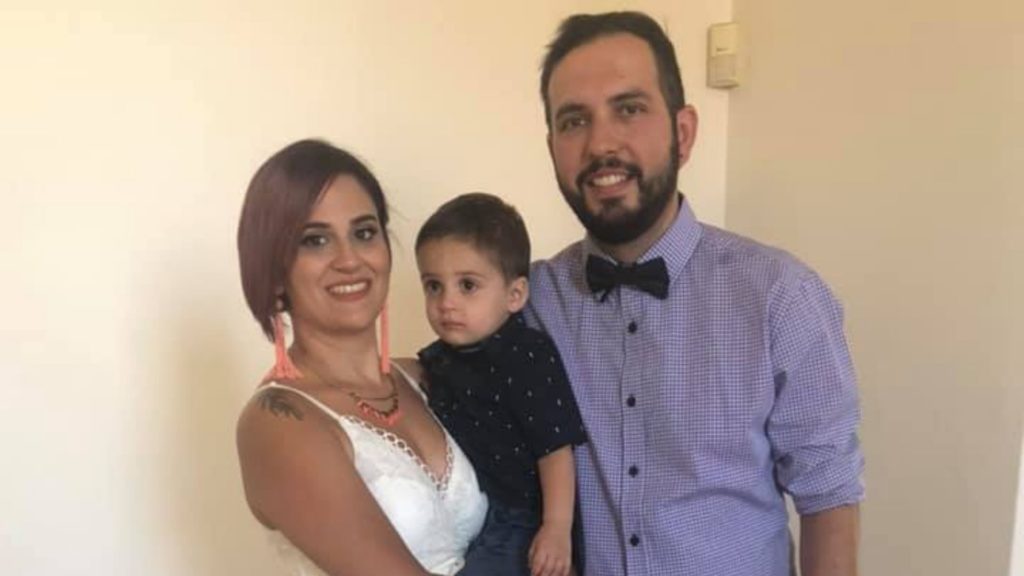 Ari with his wife Sophia and little boy. Photo: Supplied

It was just over three years ago that Sophia Varagiannis reached out to Neos Kosmos to raise awareness about her husband’s battle with Multiple Sclerosis (MS) in their quest to raise $65,000 for a treatment in Russia that they believed to be their only hope.

Their story was heartbreaking.

Two years into their marriage, aged 31, Ari’s health started to deteriorate. For weeks he would experience numbness and loss of strength in his body, vertigo, severe migraines and extreme fatigue. Simple day-to-day activities like clothing or feeding himself, let alone going to work, became impossible. After months of unanswered questions, an MRI and series of coordination tests would reveal that Ari was experiencing the onset of MS, and his case was particularly aggressive.

The one saving grace amongst it all was that the couple were expecting their first child, a blessing amidst the chaos their life had become, especially after experiencing a miscarriage just months earlier.

With their whole lives ahead of them with a baby in tow, the couple were desperate to beat the disease that had infiltrated every inch of their lives.

In their search to find a cure, the couple discovered Autologous Hematopoietic Stem Cell Transplantation (AHSCT), an immunosuppressive chemotherapy treatment combined with reinfusion of blood stem cells to help re-build the immune system. It was a costly procedure that would set them back $65,000 and require them to go to Russia to be treated by leading Russian haematologist Dr Denis Fedorenko at the A A Maximov Centre, and they didn’t have the support of Ari’s neurologist. Despite this, the newly-weds were set on their decision – one that has given Ari his life back.

“I’m actually living life to the fullest now,” Ari told Neos Kosmos. “I’m able to do normal things as I was able to once; just enjoying my little one, doing activities with him, going to work full-time is normal for me now, whereas before I was struggling. Basically just normal routine now in life, it’s fantastic.”

While they are in a good place now, looking back, the couple admits it was a “full on” experience.

Having just given birth to their baby, the family packed their bags and headed to Russia for a total of 30 days.

For the first few days, Ari underwent a series of tests to check the condition of his vital organs. Once he got the green light, the intensive AHSCT commenced.

“They just started off with taking out my stem cells in my body and then basically going through the chemotherapy, which was about four or five doses. So it was pretty intense. I was weakened from it, I couldn’t really eat much,” he recalls.

But what surprised him, was how quickly he started to feel better.

“Almost instantly, from moment they reinserted my stem cells back into my body, it was really quick!” he says.

“But obviously I needed to exercise my body to get my strength back as well because I lost a lot of that. Once that happened I was pretty much back to normal. Even the doctors were very surprising at how quick my body was actually repairing itself.”

After the treatment, Ari was in isolation for 11 days, during which time the only contact he had with his wife and baby was via FaceTime. Sophia couldn’t believe what she was hearing.

“I would say to Ari what have you been up to today? And he would reply ‘oh I’ve been doing some push ups, some sit ups, some exercises here in my room’, and I’m sitting there going ‘oh I’m half asleep and it’s not even midday’,” she laughs.

After a month in Russia, the family returned to Adelaide where Ari was required to be in further isolation for up to four months. He had been warned by his doctors in Russia that up to three per cent of the MS could return. To date Ari is ecstatic to say that he has been symptom free.

READ: Why Greek Australians are up to three times more likely to be misdiagnosed with dementia

Faced with a future in a wheelchair, unable to function as the active husband and father he is today, looking back, he says there was never any doubt in his mind about undergoing the treatment despite the risks.

“I knew I had to do this treatment because I was only going to get worse,” he says. “So for me I wasn’t scared at all, I just knew that this needs to be done. I needed to get my life back.”

“Look it’s very scary, but God, is it worth it! If it gives you a fighting chance of being even 90 or 80 per cent of what you used to be, the short-term pain and struggle is better than being stuck in a roller coast of I don’t know what tomorrow brings,” she says. “We would have done anything, we would have sold the house to go there. It was not a question.”

Ari’s experience with MS has meant a complete lifestyle overhaul.

To help keep symptoms at bay, he was encouraged by doctors to eat a healthier diet, free of processed foods, to exercise regularly and maintain a positive mindset – changes that the family has adopted as a whole.

“The cleaner you eat the better you feel, that goes without question,” Sophia says. “But just being more conscious of our decisions and our choices; even for me, picking my battles now and choosing how much I’m going to stress over things has been huge because I’ve had to adopt that mindset that Ari has so I can support him going forward.” Since 2017, Ari’s story has been read and shared by people around Australia and abroad who are in search of their own MS ‘miracle’. The couple are contacted on Facebook by strangers who are seeking information, and reassurance no doubt. Even now, Ari remembers that feeling of desperation all too well.

“I understand exactly where they’re coming from, I’ve been through that stage. So I’m more than happy to help other people,” he says.

“That’s how we came to know all about this, through somebody else who had done it,” says Sophia. “We have to be open and honest that this thing does happen, even to your closest friend or your hardest enemy, and not sweep it under the rug.”

‘One case of a guy who gets better, means nothing in terms of everybody else’

Three years on there’s no denying Ari Arambatzis’ positive results, but it remains that AHSCT is still not widely available in Australia.

According to MS Research Australia, AHSCT in Australia – which appears to be a similar procedure to that which Ari underwent – is provided through two observational clinical trials and by a limited number of centres on a case by case basis, often as a last line treatment.

Though Australia has one of the best healthcare systems in the world, it has been argued by people that find themselves in Ari’s position, that it can seem slow off the mark when it comes to available treatments.

While he admits that the Pharmaceutical Benefit Scheme is “controlled quite tightly”, he says it is often because there is expectation to see the treatment first listed by the FDA and that trials have shown that it is beneficial and better than any other treatments already available.

“If it’s not available through legitimate hospitals in America, Canada, Europe or Australia, having been through safety procedures and clinical trials published in peer-reviewed journals, then we have no idea what it is or whether or not it works, and people spend a lot of money to go overseas,” Dr Howe told Neos Kosmos. “If there was something that was really working, it would be available on the PBS.”

There is currently a trial of Dr Denis Fedorenko’s treatment underway in Sheffield, England, with results due in 2024. But the fact remains that to date, the published work on his success is too limited to be fully recognised in Australia.

“I ask myself what would I do if that was me? Would I be as desperate as them to try every treatment and so on? Maybe.” – Dr James Howe

As a veteran neurologist aged in his 70s, Dr Howe says that the progress on MS treatment has exceeded their wildest dreams.

“The long-term outlook on MS seems to have changed in my opinion dramatically from when I was a junior doctor in neurology. In comparison to what we were seeing 20 years ago, MS treatment has been transformed with immunological drugs,” he says. “I think we are up to 12 different drugs that showed in clinical trials to work by reducing the number of near attacks and in the longer run they also appear to be reducing disability.”

While there are cases where people do not respond to any of the treatments available, Dr Howe says it is rare, and actually more common to see people experience an isolated MS attack and go on to live their life relatively symptom free.

MORE: Oakleigh dad rallies for HSCT to come to Australia and is stunned by community support in his own efforts to get MS treatment

In the instance that someone doesn’t respond to treatment, AHSCT is a possible option, but as it can be life threatening, eligible patients often having to be “at death’s door to do it”, says Dr Howe. In Ari’s case he wasn’t willing to wait to reach that point.

“The other thing to say about MS is that it is enormously variable,” says Dr Howe. “I saw one man who went from 18 to 70 with one attack. There are other people who have had the most devastating acute attack of MS, in fact one is a personal friend and a doctor. Three years later she’s in her third pregnancy, she’s working part-time as a doctor and she hasn’t got a thing wrong with her. But at her initial presentation I thought she was a goner. One case of a guy who gets better means nothing in terms of everybody else, he might have gotten better anyway … it costs people a lot of money and we have no idea that it does any good,” he says.

But stepping outside his role as a medical professional, Dr Howe admits that he can only empathise so much, when not facing the reality head on himself.

“I ask myself what would I do if that was me? Would I be as desperate as them to try every treatment and so on? Maybe. But I’m not them and I’m not their age. I’m 73; I’m not going to go running for stem cell treatment,” he says. “I would never say to somebody if I was in your shoes ‘I would do different’ because I can’t be in their shoes. I can only tell them here’s what we know, here’s the risks, here’s the benefits, here’s the potential burdens and now let’s try and weigh up what’s best for your circumstances and what you really want in life.”