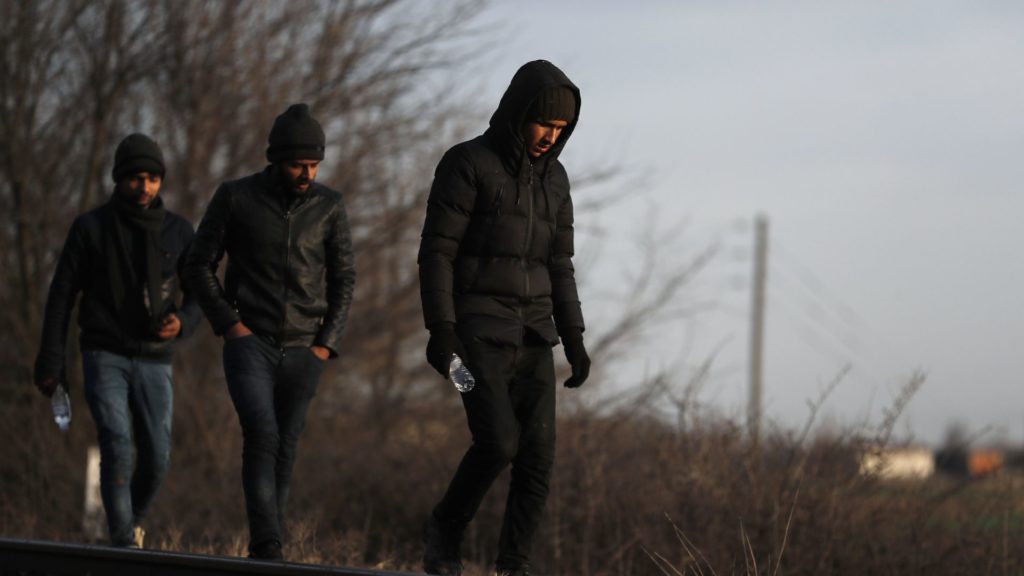 A group of migrants walk on train rails in the early morning after crossing the Greek-Turkish border over the Evros river near the village of Chimonio, Orestiada, Greece, 04 March 2020. Thousands of refugees and migrants are gathering on the Turkish side of the border with Greece with the intent to cross into the European Union following the Turkish government’s decision to loosen controls on migrant flows after Turkish soldiers were killed in Syria in February. Photo: AAP via EPA/Dimitris Tosidis

The ongoing refugee and migrant crisis in the Aegean has taken a dramatic turn in recent days with an escalating humanitarian situation on the land and sea borders between Greece and Turkey.

After Turkey removed its border restrictions with Greece on February 29, thousands of people began to make their way across the country to the Greek border. They have been met with tear gas, and warning shots fired by the Greek coastguard at boats trying to cross the Aegean sea.

The latest “crisis” started suddenly – yet migration in the region has been going on for many years, if not millennia. As an ancient route of cultural and trade interchange, the Aegean has always been a sea of overlapping waves of migrations – and the rich history of this criss-crossing is ever-present in the region today.

My ongoing research in the Greek islands and mainland suggests the living memory of previous experiences of displacement forms a vivid background to the current arrival of refugees, who have been coming since the Syrian civil war intensified in around 2015.

On February 29, Turkey woke up to the news that at least 30 of its soldiers had been killed in an air attack at an army base in Idlib in northern Syria. Turkish political leaders responded by promising to retaliate in what is another escalation of the military conflict in the region.

But the Turkish president, Recep Tayyip Erdoğan, also made good on a previous threat and declared that no migrant attempting to leave the country via the border with Greece would be stopped. This was a major shift in policy since the signing of a 2016 deal between Turkey and the EU, under which Erdoğan agreed to regulate and reduce the migrant flows to Europe in exchange for financial support.

In a matter of two days, tens of thousands gathered at the main checkpoints at the land and sea borders, only to find that the Greek side was closed. In response, the government announced that Greece would not accept any more irregular migrants, nor would it process any asylum applications for a month.

Despite criticism from humanitarian agencies and European parliamentarians over the legality and legitimacy of such measures, the Greek government stood firm. On 3 March, the EU Commission’s president, Ursula von der Leyen, travelled to the border city of Evros and thanked Greece “for being our European aspida.” By using the Greek word for shield, and reiterating that the Greek borders were European borders, she gave the Greek prime minister a strong message of unity and support.

Half open, half closed

Those who wish to believe that a half-closed border is still half open continue to wait for their ever-slimmer chances to enter Greece. Thousands of people are spending days and nights in near freezing temperatures in the buffer zone between the two borders with only limited humanitarian assistance provided by locals and NGOs.

In the Aegean islands, the situation is even thornier. As of 31 January, 2020, there were 115,600 refugees and migrants in Greece, according to the UNHCR. So far, there have been 8,432 arrivals in 2020. While the numbers are not at the levels they were in 2015, when Greece was caught off guard in the initial phases of refugee flows, it’s not the quantity of the migrants but the changes in the quality of their reception that matters.

In the past five years, the irregular flow of refugees arriving in Greek shores with dinghies has continued with some fluctuations. Greece established five migrant hotspots in its Aegean islands, yet these have not addressed the needs of those arriving. With multiple accounts documenting the appalling conditions in various refugee camps, especially at the Moria camp on the island of Lesvos, this has led to criticism of Greece’s ability or willingness to deal with the migration issue.

The new government of Kyriakos Mitsotakis, the Greek prime minister, vowed to take drastic measures and passed a new migration law in November 2019 which came into effect in January. This was followed by a plan to build closed reception centres in the islands of Chios, Samos and Lesvos which would replace the current open camp structures of the hotspots.

These measures have been presented as effective solutions to accelerate the asylum procedures and to “decongest the islands”. But they have been met with anger by locals, who protested extensively against the central government’s decisions, leading to a general strike on 25 February.

The rising tension has heightened the ideological polarisation among the locals on the Aegean islands. Anti-migrant protesters, alongside far-right extremists, have demonstrated that they are prepared to use violent means to protect their borders. In early March, some angry protesters tried to block refugee boats from arriving into harbours and block roads. Cars and buildings have been burnt and journalists attacked.

The opposing camp condemns the use of refugees as bargaining chips for political ends. They are appealing to concepts such as hospitality, civilisation and humanity to underline their stance in solidarity with the migrants, using slogans such as “open the borders” and “no human is illegal”.

Both anti-migrant groups and those in solidarity with migrants are using the region’s history to promote their own ideological positions.

Those in solidarity claim that migration is not a crime, but rather an element of the human condition that has occurred repeatedly throughout the region’s history. They recall how during the second world war, thousands of Greeks crossed the Turkish border to escape the German occupation and seek refuge in the Middle East.

The Aegean islands were also where boats filled with Greek Orthodox residents of Asia Minor came in the wake of the Convention of the Forced Exchange of Populations of 1923 between Greece and Turkey, signed after the first world war. Following the arrival of more than 1.5 million people in Greece, the population of the islands almost doubled to the extent that many locals still have family members from among the group originally and still known as the “Asia Minor refugees”.

The ongoing tensions in the region have once again made it into a place where complex negotiations take place over ideology and identity. The shifting way the past is being imagined stands as a testimony to how the history of overlapping migrations is currently being kept alive in the Aegean.