The Importance of WWII Shipwrecks in Greece

Ross J. Robertson investigates the efforts being made to bring the cultural significance of WWII shipwrecks in Greece to light 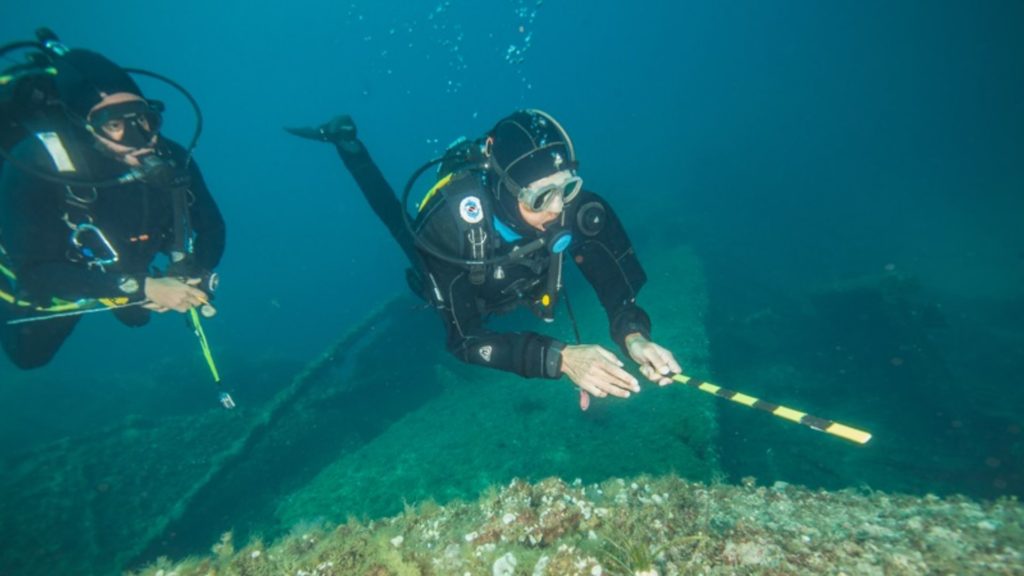 Although exact numbers are notoriously hard to verify, it is estimated that there are at least 2,000 shipwrecks in Greek waters. Of these, more than 1,000 ships were sunk during the ravages of WWII. It is thought that as many as 12 per cent – that is 120 ships and an unknown number of their crews – were lost in the wider Pagasitikos Gulf, northern Euboean and Pelion area on the central eastern coast of mainland Greece. Aerial strafing and bombing, submarine torpedo salvos, naval gun action, shipping mines, even deliberate scuttling are all causes of their demise. The underlying reason for such a significant concentration is that the passage between the eastern Greek coast and elongated island of Euboea has always served as major shipping route from Athens (i.e. Piraeus) to Thessaloniki. It is also the more sheltered route many mariners take on their way north through the Aegean to the Bosphorus and the Black Sea and vice versa.

The importance of the area in modern maritime history has not been lost on Dr Kimon Papadimitriou of the Aristotle University of Thessaloniki and fellow members of the Underwater Survey Team (UST). Their efforts, which include academic papers and presentations on the lecture circuit, are directed towards the promotion of thematic underwater tours of 20th century shipwrecks, particularly those from WWII. It is no small task, given that many sites remain undocumented or unverified, while others are inaccessible to divers by law because they are in declared archeological no-go areas.

Fortunately, times are changing. As part of the European Union’s BlueMed programme, the Ephorate of Underwater Antiquities division of the Greek Ministry of Culture has began an initiative to promote marine tourism by making specific underwater heritage sites open to the public. As already reported in Neos Kosmos in July 2019, they are currently conducting a series of trials for recreational SCUBA divers to gain first-hand experience of cultural assets such as the 2,400 year old Peristera shipwreck near the island of Alonisos, in addition to establishing virtual reality museums and information centres for the non-diving public. Although the proposal focuses on ships, settlements and harbour installations from antiquity, the wrecks of ships and aircraft which are over fifty years old are also considered to be monuments. As such, they provide additional value as tourist destinations.

The change is in line with the UNESCO conservation agreement of Underwater Cultural Heritage, as drawn up by the United Nations and signed by member states in 2001. Its mandate includes the in situ preservation and non-commercialisation of submerged locations and artifacts of cultural interest. Importantly, it also advocates the sharing of relevant education about such sites.

Dr Papadimitriou wholeheartedly agrees with these new developments. “The seabed is a natural preserve of historical memory. Shipwrecks of all sizes and circumstances are a special embodiment of that history. We and future generations can learn a lot from them – which is precisely why the public needs to be allowed access,” he told Neos Kosmos.

A prerequisite for a restricted site being made accessible is for it to be studied, substantiated and surveyed. Kimon and the U.S.T. team are facing these formidable challenges head-on. They are in the process of mapping the exact location of known wrecks in the Pagasitikos-Euboean-Pelion region. Historical details and site particulars are also being sought. Although considerable inroads have been made, there remain plenty of unidentified wrecks.

Investigation usually goes one of two ways. Either a wreck is located and then the long search for its identity begins, or the records indicate the name of a missing vessel and a physical search in the most likely area is undertaken. In both cases, any breakthrough is almost always the result of meticulous archival research requiring a deep understanding of historical context. But as Dr Papadimitriou readily admits; “Even in a hi-tech world of computer databases, magnetometers and side scan sonars, a chat with a local SCUBA diver or an elderly local fisherman who appreciates a glass of chilled tsipouro is often far more productive.” Working on the wreck Dr Papadimitriou’s interest in the region was in no small part because of Paris Sofos. “Paris used to operate a popular dive centre in the area and soon became heavily involved in trying to identify the local wrecks. So, it could be said that he dragged me down with him!” he laughs. “By the time legendary shipwreck hunter, Dimitri Galon published ‘Shipwrecks of Southern Pelion’ in 2012, I was well and truly hooked… and have been ever since.”

Mr Galon’s research revealed that during the German’s desperate evacuation of Greece in October 1944, the Kriegsmarine minesweepers GA-73 and GA-76 (formally R-14 and R-159 of the Italian Navy) were being used to escort convoys transporting Wehrmacht troops and equipment as they fled from Greek islands to the mainland. While on route from the island of Skopelos in the Sporades, they were attacked on the 18th of October 1944 by allied planes. Both were sunk just outside the Pagasitikos Gulf, near Argyronisi – a small uninhabited island whose only remarkable feature is a solitary lighthouse built in 1899.

Poring over the archives, he found the following reference in the Maritime Diary of the German Admiralty of the Aegean; “GA-73 reports an air attack against GA-76 and itself outside Volos, near the island of Argyronisos. The ships were sank. The codes were destroyed. There were about 40 survivors from the naval command of Skopelos. Together with crews, there are a total of 80 survivors.”

Despite the mayhem of their hurried withdrawal from Greece, several attempts to rescue the survivors were made by the Germans. This even included the last of the Kriegsmarine destroyers in the Aegean, the TA-18 (formerly the Italian Solferino). Commanded by Lieutenant Günther-Werner Schmidt, it was making its way to Argyronisos on 19 October when it encountered a pair of T-class Royal Navy destroyers, HMS Termagant and Tuscan. In the last significant Aegean naval engagement of the war, the TA-18 was sunk off the now popular tourist destination, the island of Skiathos.

By 24 October, those stranded on Argyronisos remained forsaken. With time running out and the Germans in full rout, the Admiralty was forced to send a message pleading clemency directly to their adversaries, the British Naval Administration: “On the island of Argyronisos (39°00′30″N 23°04′12″E), there are about 100 German shipwreck survivors who are at serious risk of starvation. Please arrange for their immediate rescue.” Such revelations invariably lead to more questions. Which aircraft were involved in the attack? The R.A.F., the S.A.A.F., the U.S.A.F. and the aircraft carrier borne British Air Fleet Arm were all operating in the theatre at the time. Where are the wrecks of GA-73 and GA-76? What was the eventual fate of all those marooned on the small and otherwise insignificant island of Argyronisos?

“World War II wrecks are particularly challenging,” fellow member of the U.S.T. team, Nikolaos Sidiropoulos explained. “Unlike wrecks from the First World War, most became post-war victims of the government run ‘Organisation of Wreck Removal’. Consequently, they were auctioned off to contractors who either salvaged and resold them, or dismantled them for parts and metal. As incomplete records were kept and backroom-deals became part of the mix, it makes confirming the fate of such wrecks very difficult.”

It turns out that GA-73 and GA-76 also fell prey to the scavengers. Both were indiscriminately carved up by acetylene torch and sold for scrap. With most of the physical evidence removed, the entire incident was more or less forgotten. 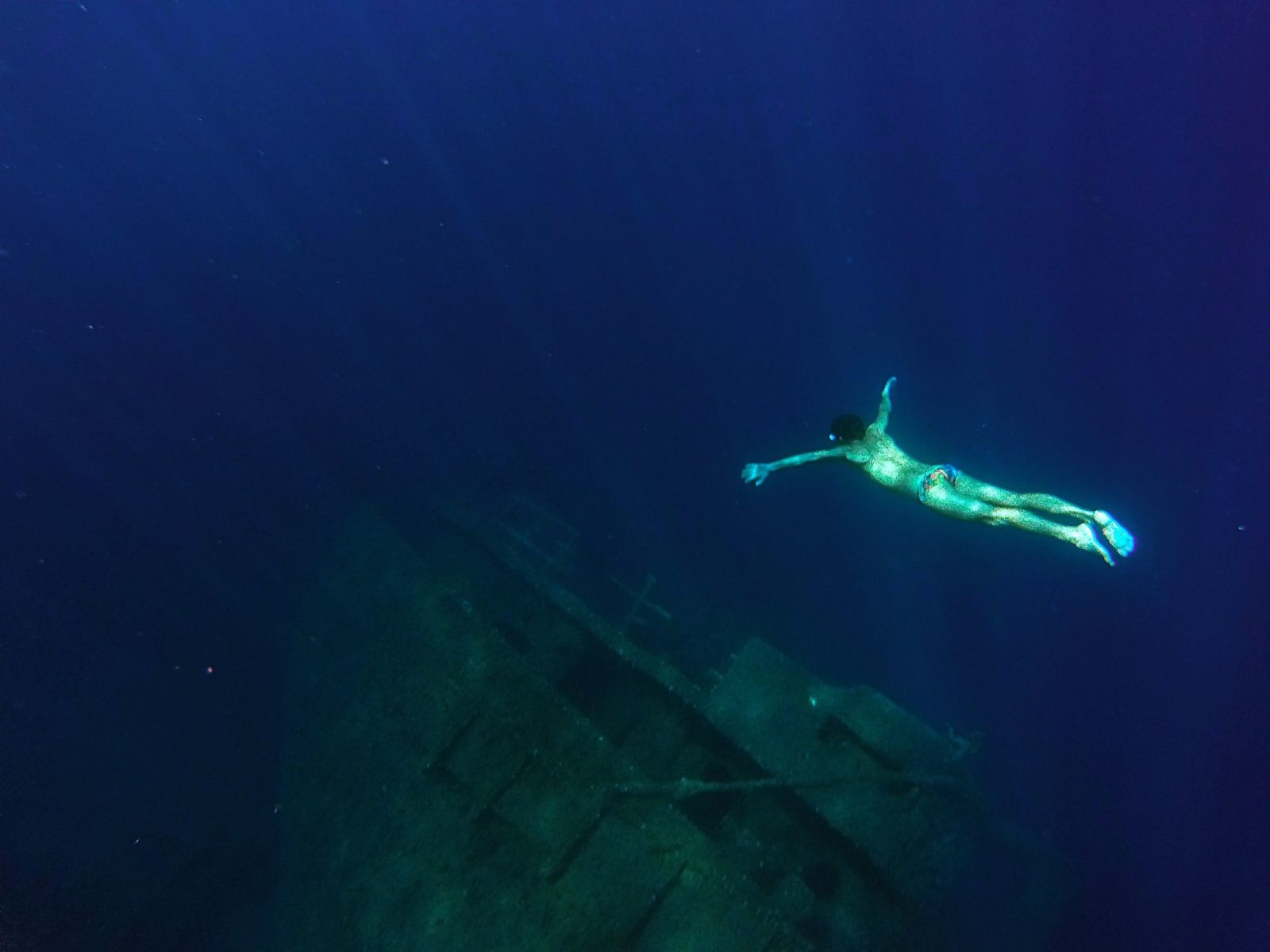 The rediscovery of such events has since become the province of people like Mr Galon and Dr Papadimitriou. Theirs is voluntary and unfunded work, done in the spirit of adventure, public interest and the promotion of history. The U.S.T. team in particular elicits the co-operation of local dive centres and wreck enthusiasts. “It’s a shared experience, as well it should be,” Dr Papadimitriou said. “After all, it is our collective cultural heritage that we are trying to uncover… and by doing so, we learn a whole lot more about ourselves.”

Seventy-five years after their sinking, the scant remains of both GA-73 and GA-76 still exist just off the shoreline of Argyronisi, at a depth of a mere nine metres. Their discovery confirms the story. It also underpins an inescapable truth – without historical context and the human drama that invariably accompanies it, shipwrecks would just be hunks of corroding metal lying at the bottom of the sea. In other words, they would have absolutely no meaning. Fortunately, there are people who have curiosity enough to make it otherwise.

Learn more about the stories behind Greek shipwrecks by visiting the UST website: www.wreckhistory.com