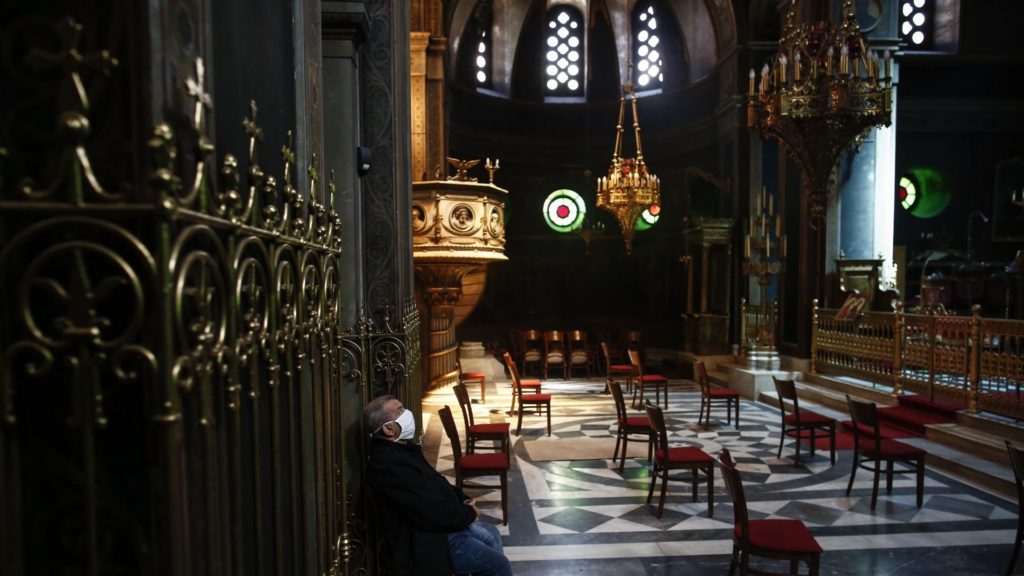 A parishioner wears a face mask and prays. Photo: AAP

Religious organisations in Australia can hold services for up to 10 people with social-distancing rules observed.

Archimandrite Evmenios Vasilopoulos, Archiepiscopal Vicar of Northcote, told Neos Kosmos that only ten parishioners will be allowed in the church at any given time. The number will not count clerics, chanters and altar boys. People will no longer be able to wake up on Sunday, and just go to church without having “made arrangements” to attend.

In the case of memorial services (mnimosina) the number of people present will not exceed ten. “If there are two mnimosina, for instance, there will need to be only five people present per memorial.”

Wedding parties will be limited to 10, not including clerics and those required to perform the service.

“It is true that many have postponed the sacrament because they didn’t want to have a wedding with just five people,” Fr Evmenios said.

Travel agents have also confirmed cancellations of destination weddings, though one Greek Australian travel agent who did not wish to be named told Neos Kosmos that two couples planning Santorini weddings split up shortly before COVID-19 restrictions foiled their plans.

Funeral services have a new limit of 20 people.

So what have priests been doing with all that time on their hands? Father Evmenios has been supporting families in need with its COVID-19 Community Relief program. So far 400 families have benefited. “This week, the Cypriot Community of Melbourne sent two trucks with food supplies,” he said, impressed by the Greek community’s response.